Nationalist MP Jason Azzopardi’s stay at the Tel Aviv Hilton hotel breached the parliamentary code of ethics because he failed to reject or later declare the gift.

The vocal anti-corruption politician has been in the firing line since newspaper Illum revealed that his 2017 hotel stay was paid for by Tumas Group.

According to the MPs’ code of ethics, no gifts should be accepted from persons or businesses that have or had any direct or indirect interest in legislation before parliament.

Tumas Group, who hold a stake in the controversial Electrogas power station project, have a diverse portfolio of interests in the hotel, real estate and gambling sectors which can all be potentially impacted by laws voted on by MPs.

The code of ethics also states that any trips abroad that are wholly or partially funded by someone with a direct interest in legislation should be declared in the annual financial declaration all MPs are expected to file in parliament.

No mention of the Tel Aviv stay funded by Tumas Group was made in Azzopardi’s declaration for 2017, Times of Malta has verified.

Azzopardi is one of the lawyers representing the Caruana Galizia family after former Tumas Group director Yorgen Fenech was charged with complicity in Daphne Caruana Galizia’s murder. 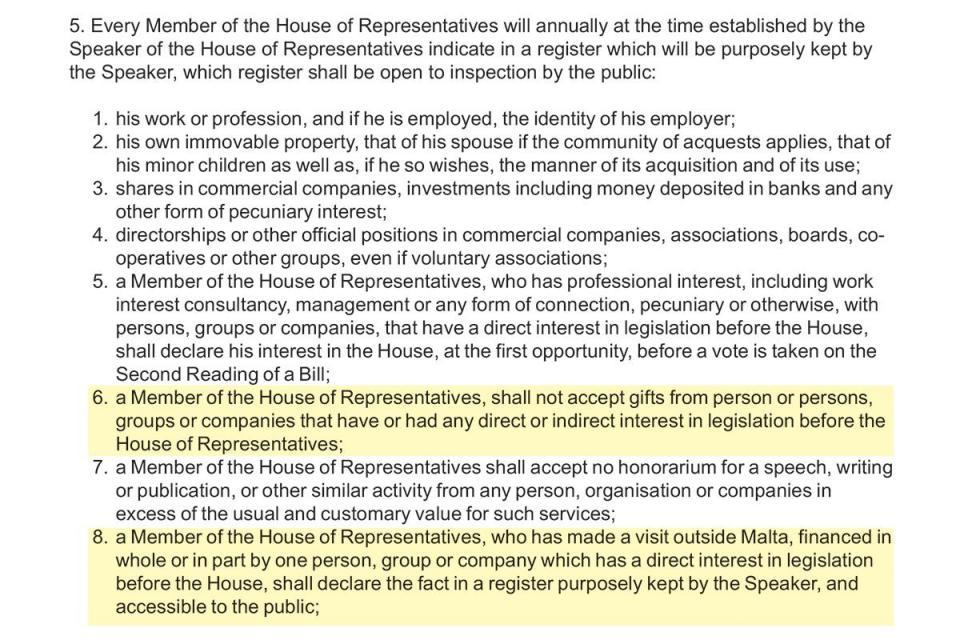 Azzopardi's trip breached the code of ethics all MPs must adhere to.

'I should have acted differently'

When contacted by Times of Malta, Azzopardi admitted he should have insisted on paying the full bill and not just paying for taxes and extras.

“Yes, I should have acted differently back then, and I apologise, but even my strongest critics have to concede that the Tel Aviv incident did not influence one iota the fulfilment of my duty as an MP,” he said.

Azzopardi says he only found out his stay had been paid upon checkout, and it would have been “churlish to refuse the offer made by Ray Fenech”.

The MP said he felt that by buying Fenech a silver gift it would have been a clear enough sign on his part that no obligation existed. He argued that at the time this happened, the Tumas Group did not have a direct interest in any legislation before parliament.

“The Electrogas deal had been sealed a long time before and there were no plans for legislation that could have impacted directly the Tumas Group or its subsidiaries. Since 2013 I am on record as having spoken and written publicly to oppose the Electrogas deal.”

Azzopardi said during his time in cabinet, Fenech had never once asked him for a favour.

He said he felt sure Fenech was very conscious that he would not have felt in any way indebted to him because of this gift, nor could he proffer any favours as he had been out of government for many years.

The MP argued that he still condemns the “corrupt” Electrogas deal and risks his life daily in the constant struggle again the “cabal” that killed Caruana Galizia.

“The same people who killed Daphne are the ones wanting me dead politically. They will fail”.  Standards Commissioner George Hyzler ruled on Tuesday that he was unable to investigate the trip as it predated the setting up of his office.

The inability of the commissioner to investigate any alleged wrongdoing prior to his appointment in October 2018 has come in for criticism by the Council of Europe.

While refusing to weigh in on the specifics of the case, Hyzler said that an MP reciprocating a gift did not exempt him from the obligations found under the parliamentary code of ethics.

Hyzler said he was making this observation independently of whether it was true Azzopardi had reciprocated the hospitality with a gift, and whether the gift was of an equivalent value.

In a five-page report, Hyzler labelled Azzopardi’s offer to place himself at the Standards Commissioner’s disposition for an investigation as “superfluous”, as it is the law that places all MPs under his remit for such probes.

Meanwhile, PN leader Bernard Grech said that he had asked his parliamentary group to inform him if they had received any gifts or favours that could pose a potential conflict or debt. Azzopardi has suspended himself from the PN’s parliamentary group pending an internal probe into his behaviour.

Grech was reluctant to weigh in on Azzopardi’s case, saying it would be reviewed by a party body. The Nationalist Party, he said, was not just talking the talk on good governance, but had decided to walk the walk.

Grech said it would be naive to assume that no politicians had accepted free meals after sitting down around a table for a meeting. However, he wanted his group to be free from any leverage that could be used against them by anyone with ulterior motives.

Grech also offered a defence of Azzopardi, saying he was a politician that had caused the Labour administration great discomfort, and so he understood the persistent attacks on his character.

That said, both he and Azzo-pardi had agreed during a meeting that the best option was to take a step back until the facts of the matter can be verified.