The little sand that remained at Balluta Bay was swept away after the latest storm, just seven months after the completion of €110,000-replenishment project by the Tourism Ministry.

Marine experts had warned last summer the project was doomed to fail, criticising the government on the “waste of hard-earned taxpayers’ money”.

Read: Balluta beach project might not survive the winter

Questions sent to Tourism Minister Konrad Mizzi on whether this was the result of lack of planning and mishandling of public funds remained unanswered. He was also asked whether, as had been declared last year, the ministry would make another attempt to replenish the bay.

Dr Mizzi had said during a site visit last August the replenished beach was the result of “an experimental measure to determine if such an exercise was worth the expense”.

Large stones can cause problems for swimmers this summer

Not long after its inauguration, sand on the 20-metre wide beach had already started to disperse despite rather good weather.

A month later, when most of the sand had already disappeared, a spokeswoman for the Malta Tourism Authority had denied that the beach had shrunk, stating that evidence collected through continuous monitoring indicated that such conclusions were “neither correct nor scientific”. 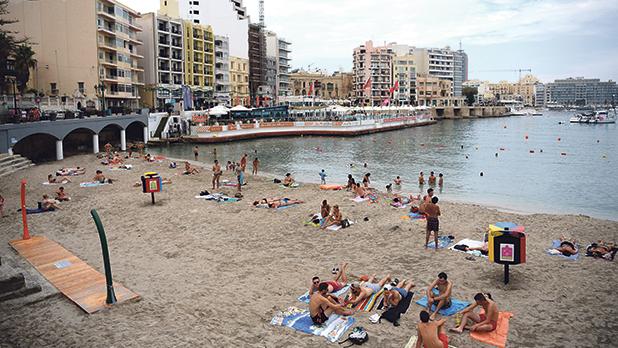 None of the sand that had been laid seven months ago at Balluta Bay is now visible. Photo: Mark Zammit Cordina

“The fact that the sand is not visible all the time does not mean that most of the sand has been washed away,” she had insisted.

None of the sand that had been laid as part of the replenishment project seven months ago was visible during a visit to the beach last week. Instead, rocks could be seen where the sand once was, potentially cause problems for swimmers.

Residents and restaurant owners in the area told the Times of Malta said they would have preferred to see maintenance work carried out on the promenade rather than “literally throwing money into the sea”.