If the excavation of a tunnel link between Malta and Gozo becomes a reality, it is likely that the story of the ferry connection will fade into oblivion. Over the years, repetition and habit has mythicised some of the ferries, such that they became part of the islands’ collective memory and history.

Who has not heard of Gleneagles, Jylland and Għawdex? For baby boomers, it was Banċinu and Imperial Eagle. The latter is now a diving attraction off Qawra, while the Banċinu, built as a luxury yacht for a tycoon, ended its days in a Greek scrapyard.

In November 1927, the Clyde Shipbuilding & Engineering Co. Ltd, Castle Works, Port Glasgow, delivered the 128-foot, twin-screw yacht Migrant (Yard No. 352) to Kenelm Edward Lee Guinness. It was powered by two, six-cylinder M.A.N. engines. Guinness (1887-1937), a director in the famous brewing company, was an Irish-born racing driver. He was associated with Sunbeam racing cars and set a new speed record in 1922. 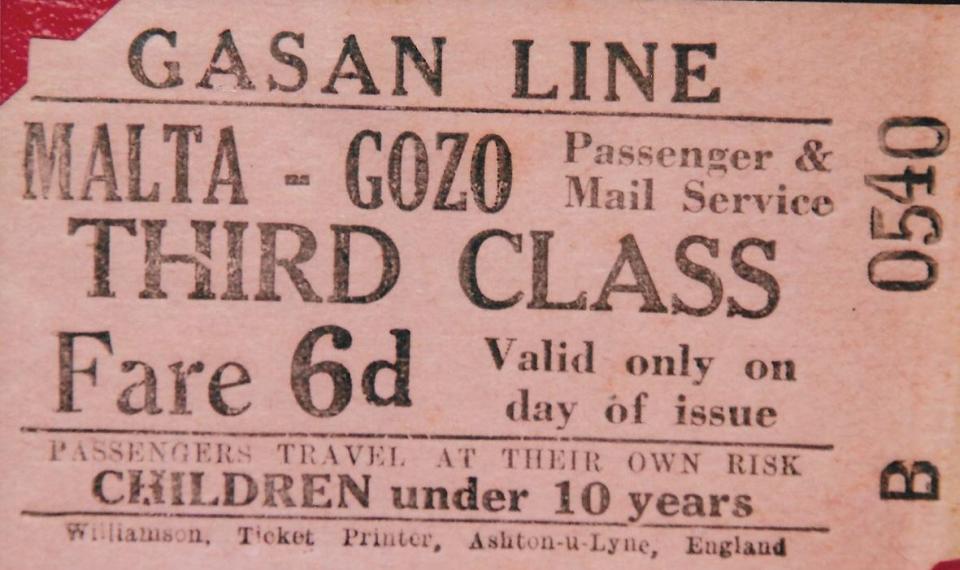 Guinness was a noted automotive engineer who invented the KLG spark plug, named after his initials. He was also fascinated with yachts and converted his first, a surplus minesweeper from World War I, to carry his racing cars to sports events. A serious crash in 1924 put paid to competitive driving. In 1926, he joined his friend, the world speed record holder Malcolm Campbell, in a visit to the Cocos Islands to hunt for pirates’ buried treasure.

Migrant was sold in 1933 to Cie. Générale de Publicité Parisienne, SA, Nice, and renamed Victrix. It was renamed Audacieux in 1936 and Migrante in 1938. In September 1939, it was requisitioned by the Ministry of War Transport (MWT) for anti-submarine service as Armed Yacht FY 019. The MWT acquired it in 1941 but the vessel’s previous owners bought it back in 1946.

The yacht was bought by Joe Gasan (1891-1976) in September 1947. A hand-coloured photograph by the famous yachting photographers Beken & Sons shows it as Migrante at speed off Cowes, Isle of Wight. 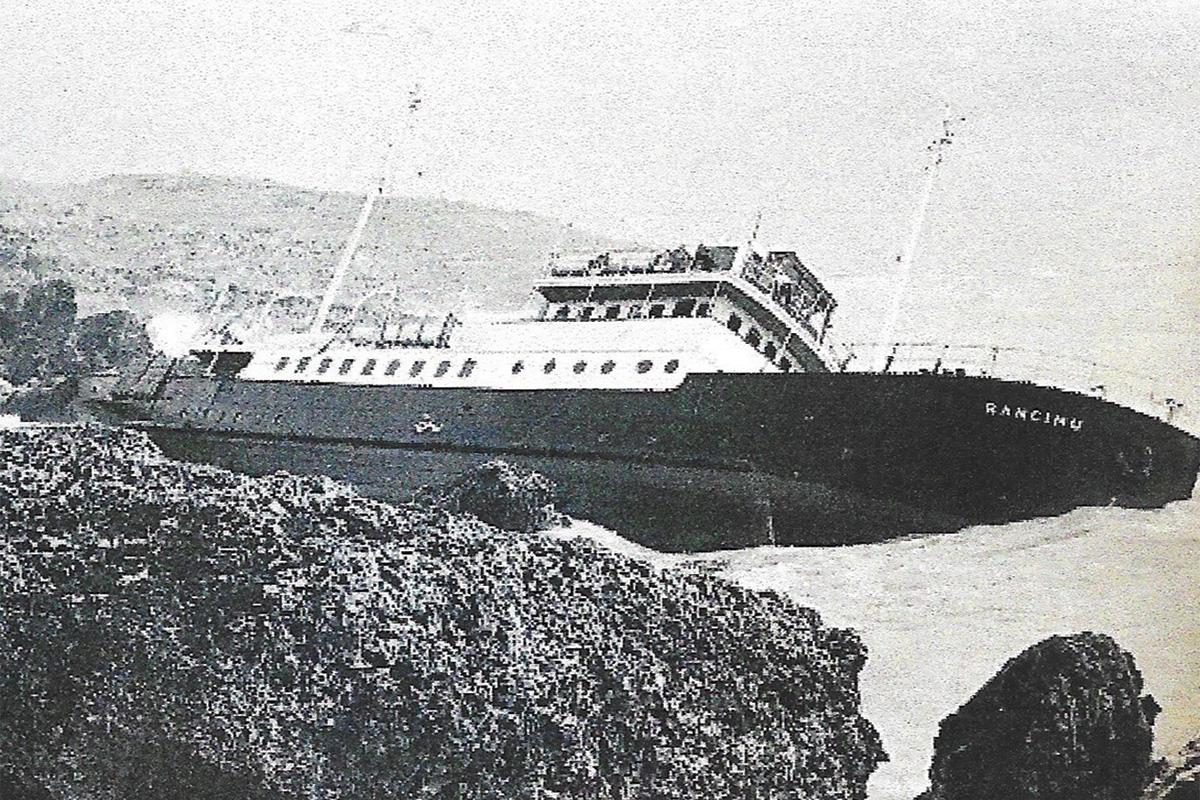 Although the inter-island ferry service was new to Gasan, he had operated the mail service to Syracuse with Ljubljana and Maltana between 1923 and 1936. Migrante was christened Banċinu, the name probably being derived from the Italian bacino (dock, carbonifero – coal bed, di carenaggio – dry dock, di raddobbo – graving dock) a generic word reflecting the owner’s maritime connections.

After its arrival on March 20, 1948, the conversion from yacht to ferry seems to have been carried out intermittently with long gaps in between services. It was christened Banċinu on October 3.

Joseph Bezzina and Graeme Somner in The Gozo-Malta Ferry Service (1991) and Ferry Malta (1982) cite the difficulty Gasan encountered in honouring the mail contract. Since the conversion was taking a long time, some unsuitable vessels were chartered to fill the gap; this led to indignant letters of complaint to the press.

It has been said that Banċinu did not carry cars. However, its pre-war predecessor Royal Lady carried a few as stipulated in the contract. It is therefore highly unlikely that Gasan could have got away without carrying any. In the photo feature ‘Meeting the Gozo boat’ by ‘Benedict’, published in The Sunday Times of Malta of July 24, 1955, photographs of the 1950s show a wide ramp astern and cars awaiting to board. It is plausible that the ship was pressed into service soon after arrival and no cars were carried before ramps and car spaces were installed during breaks in the service or after it started service on July 15, 1950.

Bezzina and Somner say Banċinu was not working the route at all before July 1950 but this does not tally with the report of the tragic accident at Ħondoq ir-Rummien on Saturday, October 30, 1948. On that fateful day, Banċinu left Mġarr Harbour at 1.15pm but landed its passengers at St Paul’s Bay as it could not berth at Marfa due to a strong southwest wind. The crossing had taken more than an hour and passengers were landed at St Paul’s Bay by tender as there was no proper quay at the time. 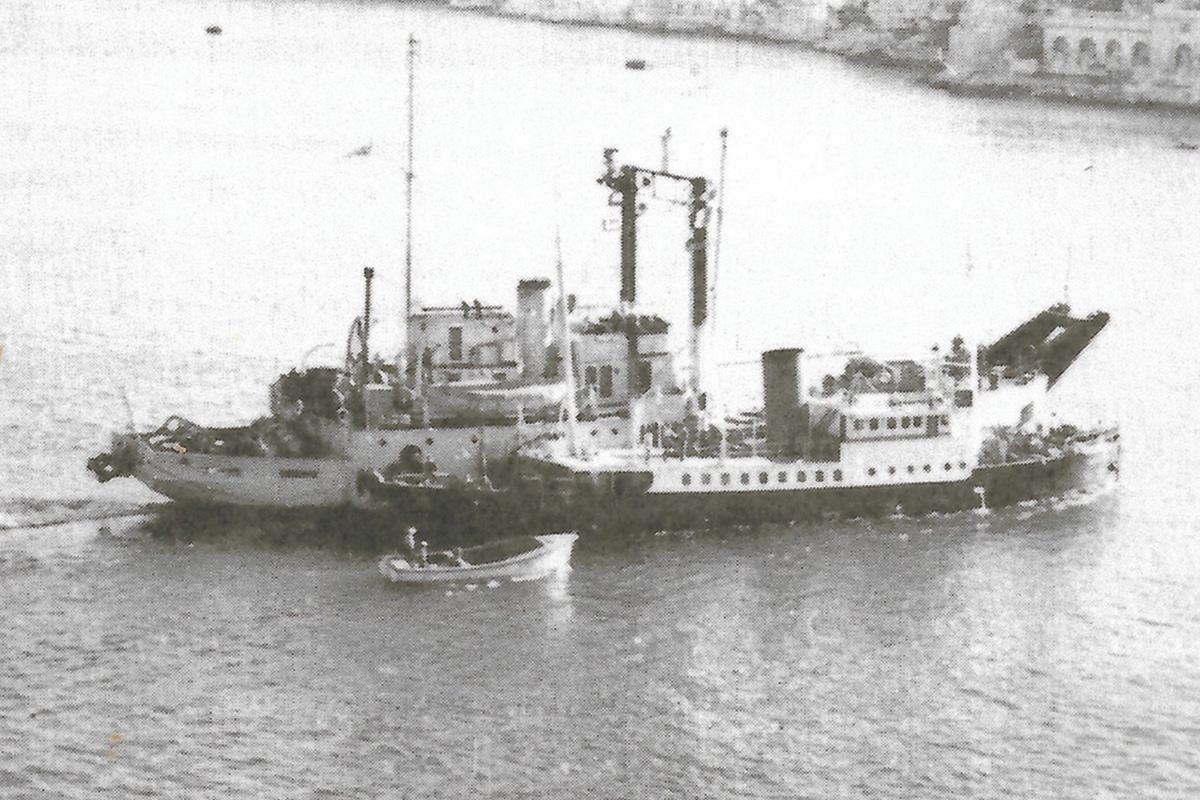 Banċinu was late returning to Mġarr so it was decided to cancel the 4.30pm trip from Marfa. This triggered the chain of events that led to the tragedy that followed when 23 people were drowned after a hired luzzu that made the crossing capsised and sank within sight of land, a short distance from Mġarr Harbour.

In winter, ferry trips were regularly cancelled; being stranded for days on either island was not unknown

The ship settled down nicely on the route and earned plaudits for punctuality, seakeeping, speed and efficiency. ‘Benedict’ described the “scene of indescribable bustle” at Marfa on Monday mornings as Gozitans raced from the ship to one of 16 buses waiting to take them to Valletta.

The inadequacy of the quays at Marfa and Mġarr Harbour – especially in bad weather when berthing was subject to the prevailing winds – was well known. In winter, ferry trips were regularly cancelled; being stranded for days on either island was not unknown. It was the determined refusal to be stranded at Malta over a long weekend that led to the Ħondoq ir-Rummien tragedy. Murphy’s Law decreed that Banċinu would suffer a similar fate, albeit with only a single loss of life. 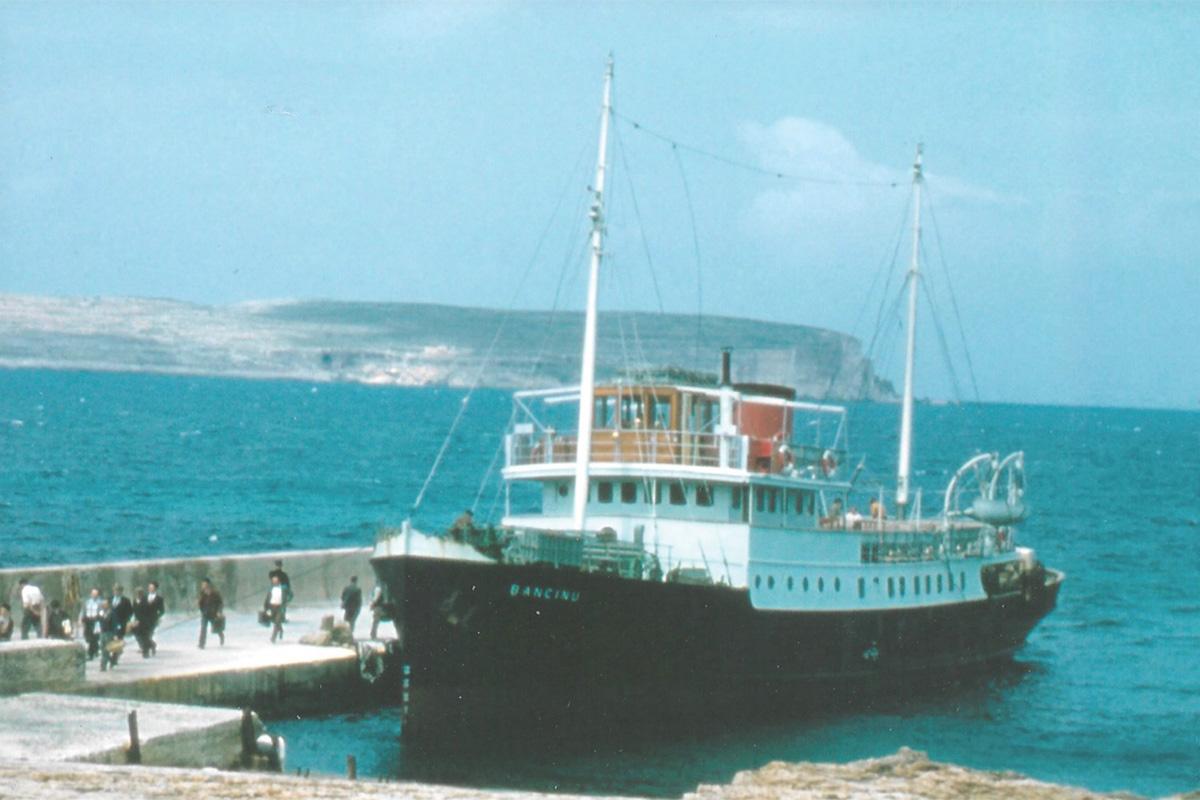 On the evening of January 22, 1957, Banċinu and Queen of Peace were moored, as usual, at Mġarr Harbour. The larger Banċinu was berthed at the outer section of the low breakwater. Late in the evening, the wind increased to Force 10 on the Beaufort Scale.

The crews of both ships were hastily recalled from their homes at Għajnsielem. The crew of Banċinu arrived to find that the ship had broken its moorings and was being held to the breakwater by a single hawser; this eventually broke under the strain and the ship was driven aground on the rocks at Żewwieqa. The ship was holed and listed heavily with its starboard side on the rocks. Queen of Peace, with a full crew, escaped a similar fate; with skilful seamanship it was sailed, stern first, out of Mġarr Harbour to the safety of Grand Harbour.

Ġużeppi Xuereb, the 63-year-old watchman on Banċinu, was heard crying for help; by the time four men boarded the ship at dawn he was gone. His body was recovered at Comino on February 1.

Banċinu was righted and refloated by the Royal Navy coastal salvage vessel Uplifter, which towed it to Grand Harbour on February 10. After being patched up at the Dockyard, it was laid up at Coal Wharf, Marsa. On April 27, 1957, Banċinu was struck by the Royal Army Service Corps landing ship Charles Macleod, which was leaving for sea.

That year, the mail contract was awarded to Magro Brothers and Eucharist Zammit with effect from November 1, 1957. The partners bought the Crested Eagle (later renamed Imperial Eagle) from England for the service. This left Banċinu without employment since the service from Grand Harbour to Mġarr Harbour was already covered by the lateen boats and the Queen of Peace. Having already sold off their interests in public transport, Gasan sold Banċinu to V. Vasilakis in December. The ship was towed from Grand Harbour to Piraeus, Greece. 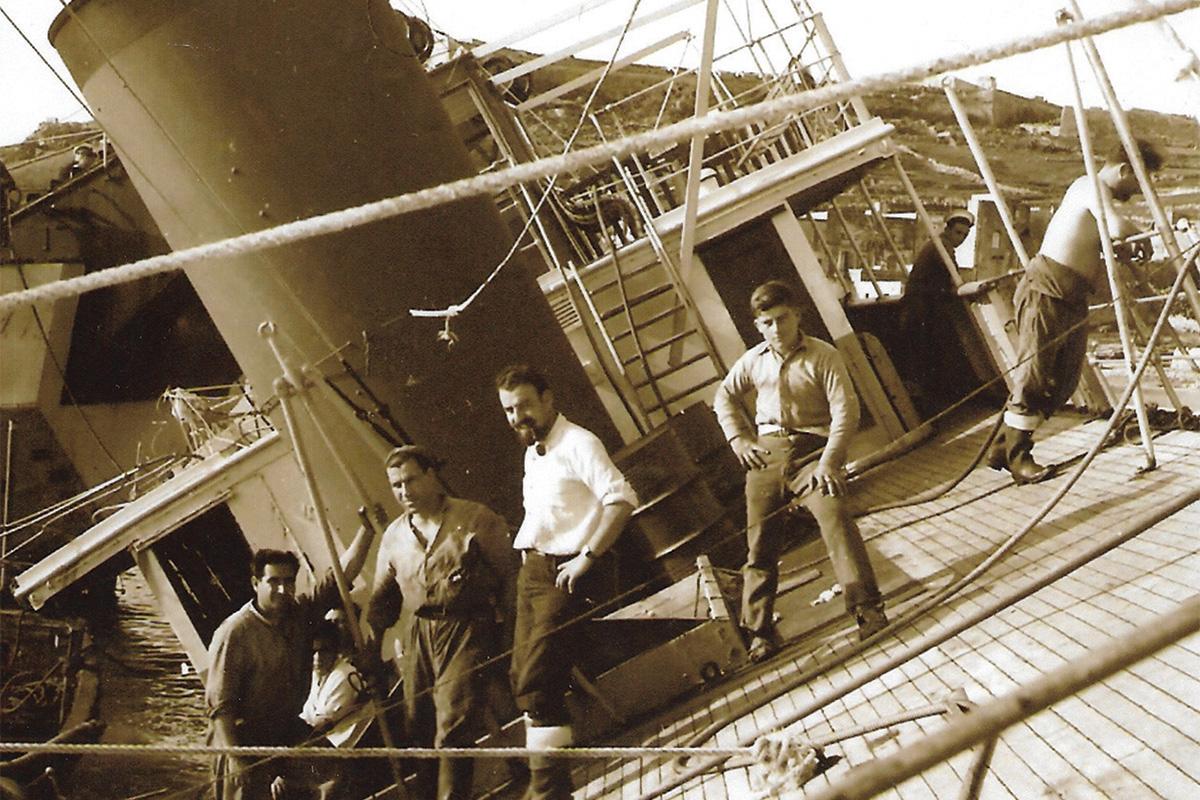 In the 1950s most of the small Greek islands were served by passenger-only ferries, albeit with space for a few cars, as was the case with Gozo, using mainly converted European yachts, cargo ships and former naval vessels. It was well known that with the right amount of steel plate, Greek shipyards could alter a vessel to disguise its age and provenance and make it look modern to travellers. The former Banċinu was given such treatment.

Very minor changes had been carried out in Malta, save for a new wheelhouse above the original bridge and space provided aft for a few cars. Other than that, Banċinu still resembled the original Migrant. As the photos by Megalokonomou Brothers show, the ship emerged with modern raking bows and an elegant superstructure. This increased its gross tonnage from 357 to 525. There was no room for cars. A Maltese visitor to the Sporades would not have recognised the old Banċinu.

In 1960 it was sold to Kavounides Brothers and was advertised as a yacht for charter. The ship was laid up in 1961, renamed Sirios and used as a relief vessel. In February 1964 it was sold to Saronikos Shipping and renamed Vorioi Sporades (North Sporades) for service between Volos and the eponymous archipelago.

The Sporades is made up of 24 islands, of which only four – Skyros, Skopelos, Alonnisos and Skiathos – are inhabited. The first Mamma Mia film was shot at Skopelos, which stood for the fictional island of Kalokairi. Despite the advent of car ferries and mass tourism, the Sporades maintain their reputation for pristine beaches, wooded terrain and a marine park that is home to dolphins and the Mediterranean Monk Seal.

The end for the former Banċinu came in March 1970 when it was sold to Navademo Shipping Company, Panama, for demolition by Stamatiou at Perama. Migrant had lasted 43 years, including a stint of service in Malta and Gozo as Banċinu. The ship is now recalled by a restaurant at Mġarr Harbour, not far from its old berth and within sight of Żewwieqa, the scene of its tragic grounding in January 1957.

Acknowledgement
The author would like to thank Aris Bilalis for his kind assistance with information on the subsequent fate of Banċinu and the photos by Megalokonomou Brothers. 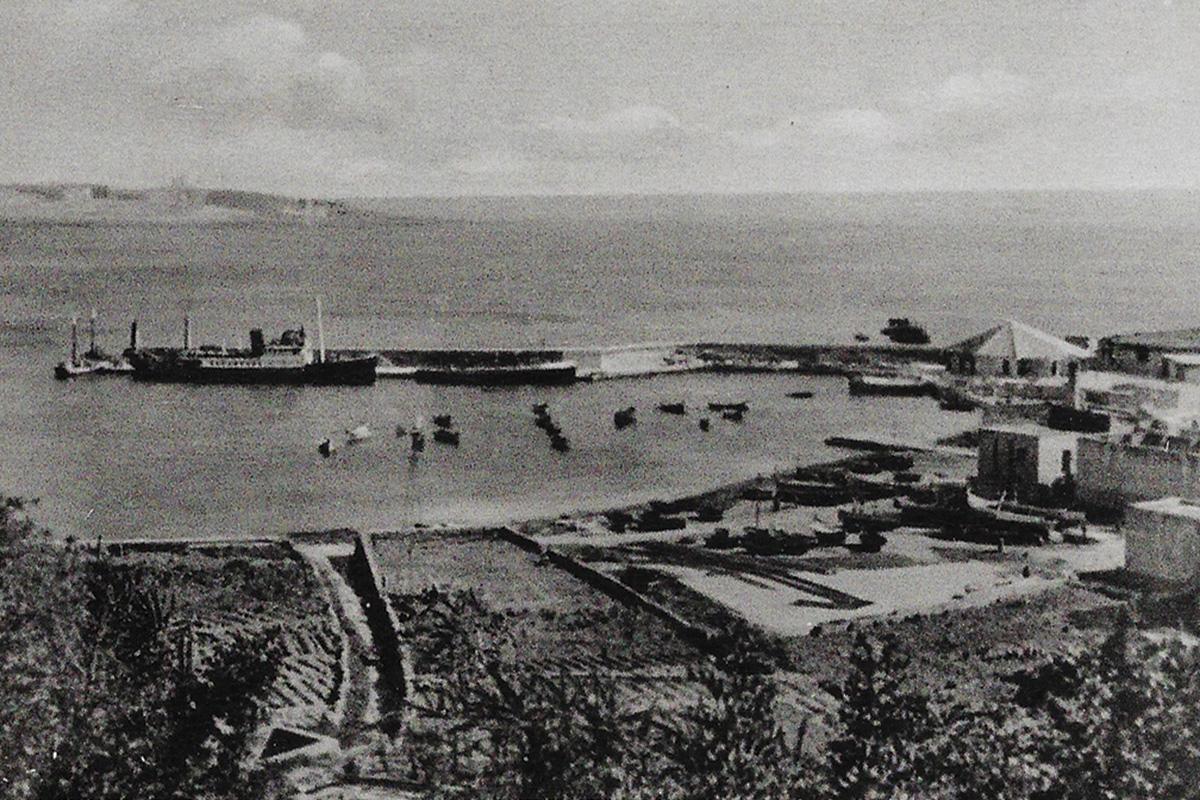