The Central Bank of Malta has issued numismatic coins in gold and silver depicting ‘The Baptism of Christ’, a statuary group by Giuseppe Mazzuoli (1644-1725).

The coins are issued under the Europa Programme with the theme ‘Baroque and Rococo’ and bear the Europa Star logo. 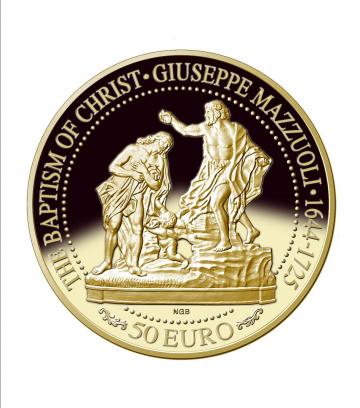 They were designed and engraved by Noel Galea Bason and were struck at the Royal Dutch Mint.

The reverse of the coins depicts the ‘Baptism of Christ’, a monumental white marble sculpture executed in Rome by Giuseppe Mazzuoli and installed in the apse of St John’s Co-Cathedral, Valletta, in 1703.

The obverse of the coin features the coat of arms of Malta and the Europa Star logo. This year’s coins will be part of a five-year series dedicated to different periods of European art-forms and history, which have been widely grouped as: Modern 20th century (2016), The Age of iron and glass (2017), Baroque and Rococo (2018), Renaissance (2019) and Gothic (2020).

The coins may be purchased directly from the Malta Coin Centre’s online e-shop facility on www.maltacoincentre.com or from the main building of the Bank. The gold coin will be sold for €340 and the silver coin for €60.