A small tooth is almost all that remains of a 2,000-year-old baby discovered in an ancient burial site beneath a Rabat school.

The series of catacombs, discovered during works to extend the playing fields of the St Paul’s Missionary College, also revealed the remains of “at least eight” ancient island dwellers, decorative pottery – and new clues to unlocking the secrets of Malta’s past.

“The area around Rabat is rich with remains. These tombs are the latest discovery we have made, with some interesting contents,” Anthony Pace, the Superintendent of Cultural Heritage, told The Sunday Times of Malta.

The site is open to the public today, and visitors can view the artefacts and even the human bones discovered there, previously unseen for thousands of years. Superintendence officials will guide the public around the site, briefing them on its contents.

A conservator and an osteologist (an anthropologist specialising in bones) will also explain the steps that follow in studying and preserving the discoveries.

Some of the skeletons are beautiful... We’re not crazy, we’re archeologists

“Oh yes, this is just the beginning of the process. Discovering a site is definitely a thrilling experience, but so too is analysing skulls in the labs, for instance,” Dr Pace said. Turning to his colleague, he said: “Some of the skeletons are beautiful, there’s no other word for them.” After a pause he added: “We’re not crazy, we’re archeologists”.

Walking into the Rabat school’s grounds, children yesterday played football on a newly surfaced pitch, the schoolhouse looming large behind them. Leading the way to excavation works being done to extend the grounds, Dr Pace points past some mesh-wire and plastic piping along a gravel walkway.

“First we discovered this chamber and then we found more and more,” he said, as the newly unearthed depths of the playing field’s boundary wall revealed hand-chiselled crypts.

Inside what looks like a small shelf carved out of the stone, about the size of an encyclopaedia, was one of several burial sites used for infants. 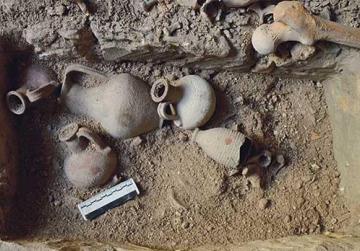 Some of the decorative pottery found in Rabat.

“2,000 years ago, child mortality rates were high. They would lay them to rest in these miniature tombs, plaster it shut and then open it and use the site for a fresh burial as soon as they could. This would often be done over and over,” said Bernardette Mercieca Spiteri, an anthropologist studying the remains.

So who were these ancient people? Dr Pace shied away from calling them Maltese.

“‘Malteseness’ as we know it today is a relatively new invention. Malta would have been home to moving people from the Mediterranean, it would have also had settlers, and they would have considered themselves part of the empire, in this case, the Roman Empire,” he said.

It was nearly impossible, he added, to place a precise date on the burial sites, but the contents and the location indicated they were probably from a time when Malta was transitioning between Carthaginian colony to Roman – a time, he said, when a strong Jewish community was present on the island, along with merchants and colonial settlers.

“These sites help us piece together that history, a time that we don’t know enough about,” Dr Pace said.