The colourful bee-eater bird is gracing the island in increasingly larger numbers, but despite its name it is not the main cause of a recent decline in the honey bee population.

The biggest killers of honey bees are in fact pesticides and insecticides, sprayed in the open, according to environmentalist Alfred Baldacchino.

These substances, he said, were not only terminating bees but studies had shown that the affected bees were passing on the chemicals to the honey when they flew back to their beehives.

Mr Baldacchino was speaking to this newspaper following complaints from some beekeepers that this species of bird was increasingly feeding off their bees. 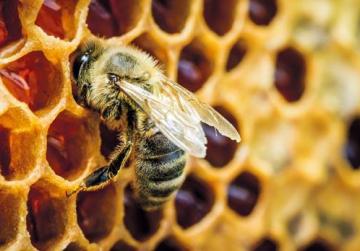 Bees could pass on the chemicals in pesticides and insecticides to the honey. Photo: Shutterstock

The bee-eater has recently started extending its stay in Malta because although it has always been a protected species, it used to be one of the most sought after. Following harsher enforcement and greater awareness, it was no longer hunted, Mr Baldacchino said.

But he defended the bee-eater, saying it did not just feed on bees but also ate other insects, including the Oriental hornet, which recently drew fears in urban areas.

And as part of the natural ecological cycle, it actually ate old or weak bees, freeing the colony of this burden.

This was reiterated by ornithologist Natalino Fenech, who said that according to Libyan studies, bee-eaters rendered a service to bees by catching the sick and elderly ones.

Mr Fenech acknowledged there had been an increase in the number of Bee-eaters spotted in Malta because they were no longer shot at and because populations in Sicily had grown.

He explained that the bee-eater fed on all flying insects – from bees to moths, beetles, butterflies, dragonflies and wasps. Photos taken by wildlife photographer Shuki Cheled this summer in Israel even shows a bee-eater trying to swallow a bat.

Still, it was not the only bird that ate bees – sparrows, starlings, several warblers as well as Il-Merill, or blue rock thrush, did so too at certain times of the year.

Keepers who are worried about the bee-eaters feeding on some of their bees should avoid queening during peak migrations, from late March till mid-April, and in mid-September, he advised.

They should also avoid putting beehive boxes close to or under trees or overhead cables as bee-eaters like to pounce on flying insects from these perches.

Mr Baldacchino’s concern about pesticides was echoed by Michael Muscat, one of the 200 registered bee-keepers in Malta.

Mr Muscat, who currently has about 70 colonies, said: “The biggest enemy of bees is the indiscriminate spraying of insecticides and pesticides, especially in the morning, at the peak of pollination.”

According to studies carried out abroad, pesticide and insecticide are the primary culprits of what is known as the colony collapse disorder, which is when the majority of worker bees in a colony abandon the hive because they get disorientated, leaving behind the brood (bee larvae) and stores.

Studies have also shown that neonicotinoids, a class of insecticide, significantly harms the colonies and is the major contributing factor to CCD.

There are other culprits apart from pesticides, although their contribution to bee decline is smaller.

The varroa destructor is a parasite mite that attacks honey bees. In 1992, its importation destroyed some three quarters of the colonies in Malta and Gozo. The bee-keepers have recovered since then.

Another culprit is the hornet, whose population recently exploded in some areas, Mr Muscat said. One particular colony in the Ta’ Xbiex was so severely depleted of foraging bees, because of the hornets, that the colony collapsed.

As for the bee-eater, Mr Muscat said he could not trace the decline of the bee population in some of his apiaries to the bird but he knew of other keepers who have been hit.