After directing Midnight Express in Malta in 1977, Sir Alan Parker returned on location at Fort St Elmo for the first time since. He spoke to Sarianna Mileski

Almost four decades after directing Midnight Express, you have come back to Malta for the Valletta Film Festival.

Yes, I attended the opening of the Valletta Film Festival at Pjazza Teatru Rjal. It was great. And I think that wonderful new area is fantastic. It’s such an imaginative use of that particular space. It makes a change to see something that is modern in somewhere old that fits in perfectly.

The new Parliament House is also impressive. I’ve just come back from Edinburgh, where the new Scottish Parliament is. I think you got a better deal with Renzo Piano. It’s the most compatible thing I’ve seen for a long time – just sensitive to what was already there. And the colours of everything are absolutely the colours of Valletta. It’s beautiful.

Did you speak at the opening?

I said one sentence: “I’m looking forward to going back to St Elmo.”

Before filming Midnight Express, had you researched the historical significance of Fort St Elmo? There’s a whole parallel, of course, with the Turks.

No, not really. To be honest with you, it was just an aesthetic decision. There was the other location in Malta, and I can’t remember where, with the wheel, when they walk around the wheel [in the psychiatric division of the prison] in an older castle somewhere – an even older castle. Older than the fort. No, I didn’t know the history.

Nobody said, “This is where we fended off the Ottoman Turks”?

Were you struck by the difference between the realities of film infrastructure and the industry as it’s grown, such that you would have a new festival like this, versus what you saw in 1977?

Those were early days. It was just toe in the water, with people thinking of Malta as a film centre. It had just started. Admittedly, we weren’t the first. But in a way there’s something nice about that, you know? The people were incredibly welcoming, because they really wanted us to be here. I’ve arrived in places with a hundred-strong film crew, and you’re really not welcome, because we really do disrupt the place. Because this film was centred in St Elmo, we didn’t disrupt as much as we would usually do.

We’d all done four years in a jail

There are quite a few extras in the film, and they’re all Maltese. Since there was hardly any film infrastructure back then, how did you find them?

We had a huge open call in Malta, where I spent a good few weeks looking at anybody who wanted to be in the movie, really, because I cast extras individually. A lot of people just say, “Send me 50 assorted” sort of thing. I had Polaroids of every single person that we saw in the Hilton Hotel production area. We did all the casting there. All of the ones we used were hand-picked.

There was also Joe Zammit Cordina, who was both one of your actors and the casting agent for the extras.

I remember him. He helped a lot. And he’s in the film as the customs agent. He had a wonderful face.

For the Maltese, the customs scene with Joe Zammit Cordina is their favourite. And we’re the only ones who seem to know what he’s saying. 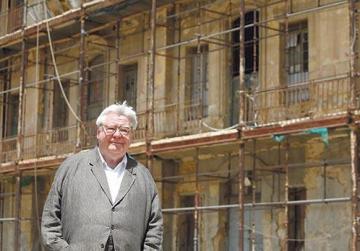 It’s true. I thought the only people that will find me out will be the Maltese and the Turks. From a Hollywood perspective, we were on this island in the middle of the Mediterranean, so far away from Los Angeles and the Columbia studio, that we had carte blanche. They never knew what we were doing. About five weeks in, they said they wanted to see something, but up to that point, they were nowhere near – the absolute opposite to today, where because of computers they know exactly what you’re doing, what you’re shooting, how much every single thing is costing to the penny.

Midnight Express was particularly hard because it was shot in 53 days. When you’re away, you shoot a six-day week anyway, so you can get out of the place as fast as possible because of the expense of having everybody in hotels and the whole thing. On this, we went I think three weeks without a day off. That’s hard. People started to get sick and irritable because they couldn’t get to the shops because they didn’t have a day off.

We worked too hard. Not just such long hours; we were making a very harrowing film. And there’s that line between what’s an illusion, what’s drama or dramatic reconstruction, and what’s real. We had one actor, Paul Smith. The guy that played the jailer in it, and he was very rough on everybody. Even though he was told by the stuntmen how to hold his punches, he never did, and that was always difficult. There was an Italian actor called Paolo Bonicelli, who had a glass eye, and I was always concerned because Smith was such a big man. Well, he would smack him around the face, and I said, “You’ve got to be careful.” He said, “I never touched him!” But Paolo also had rotten teeth, which were false, they were make-up teeth. And I said, “You did. You hit him too hard.” And Paolo spit out the teeth! He’d broken the teeth, he hit him so hard.

John Hurt, the guy who plays Max, had this wispy beard, and Smith grabbed him by the hairs. All of us just went “Oh, no!” and Hurt just went ballistic. We had to explain to Smith that the whole thing is an illusion and no one should get hurt, really.

I’m very proud of the 14 films I made

This was early in your career as a director, your first dramatic feature, after having made Bugsy Malone. Was there anything you carried away from the experience?

The whole nature of the filmmaking. It was such a concentrated period of time. It was made pretty fast, considering how thorough the film was. At the end of the film, we’d all done four years in a jail, really, because we’re in that St Elmo location for a long time, long hours and often seven days a week. If anything, I learned not to work so hard ever again, or not to work the crew so hard.

What did you do here in your leisure time, the rare bits that you had?

We had very little. In the house that I rented with [producer] Alan Marshall and Geoffrey Kirkland, the production designer, we had nice gardens and a swimming pool, and the only recreation we had was that on the very rare days off, we would have very large parties for the crew.

So you didn’t manage to interact with many Maltese?

Well, no, but we had a lot of Maltese people on the film. I had a driver called George. If George is out there, I send him my love – if he’s still alive. [Laughs] He used to make a salad for us, I remember.

No, I don’t. If I’m in the US sometimes and jetlagged, I’ll switch on the TV and see something and say to myself, “Oh, this is quite good. Oh, I made this!”

So it holds up for you?

Yeah. I think there ought to have been, perhaps, a few nicer Turks in the story. It didn’t occur to me at the time. I was quite young when I made it. As filmmaking goes, it does hold up. It still looks incredibly modern, even though it’s 39 years old.

Are you steadfastly still retired?

Oh, yes. I’m painting. It’s my full-time thing. I always did paint, but I just really fell out of love with film and went back to what was my first love. There was always a screenplay I was writing and offers coming in, but frankly I’ve enjoyed the last two years more than all the years before. I was never that enamoured with the film industry. I always found it really hard. I wrote and directed and produced, and controlled the films as much as anybody could, and with that comes huge responsibility.

But I’m very proud of the 14 films I made. And they were made for the right reasons, whether they were successful or not, I don’t blame one single person – other than me. I had a completely free hand to do what I wanted to do. Working within Hollywood, that is actually very unusual.

Do you consider yourself a cinema fan?

No! I love coming to festivals. I saw Inhebbek Hedi at the opening of the Valletta Film Festival. I’d never see a Tunisian film before. That film would never run in England, and that’s the beautiful thing about festivals.

Otherwise, I’m interested in artists, painters. When I read the paper every morning, I click on the Guardian website, and I go straight to ‘Culture’. In Culture, it says ‘Films’, and I go straight to ‘Art’. I never look at the film section. I have to say I am a huge fan of the Swedish, Danish noir TV. I’m completely hooked on things like The Killing and The Bridge. That’s my favourite stuff right now.

Is there anything that you refused that you then regretted?

On behalf of my young son and my grandchildren, I should have done Harry Potter. It probably was a big mistake. But I’m pleased in my stubbornness, and doing the films I wanted to, which meant I could retire early.