Opposition leader Bernard Grech on Friday urged the Prime Minister to reach a compromise over the nomination of a Speaker of the House of Representatives, just hours before Parliament is summoned in Valletta.

Parliament's first sitting after the general election is due on Saturday morning, and Anġlu Farrugia is set to be reappointed as Speaker for a third term. He only needs a simple majority in the House.

The PN disagrees with his nomination, with Grech on Friday saying the olive branches that he and Robert Abela were offering each other should lead to a compromise.

On Facebook he urged for a solution, so as to ensure there was no repetition of what happened during the last legislature. 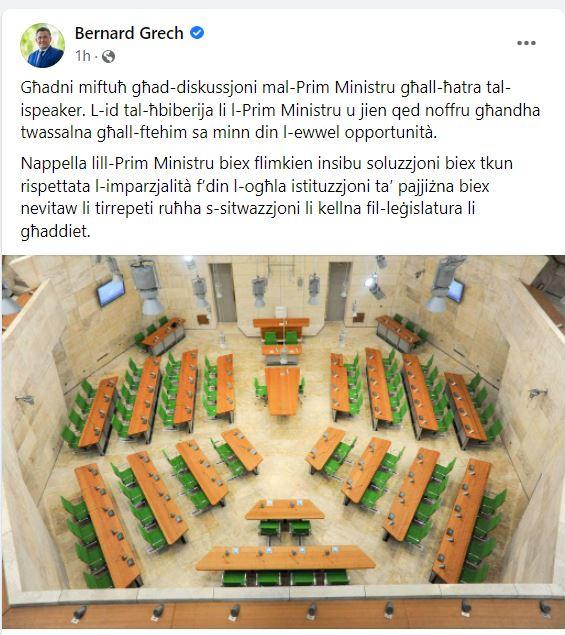 The party has not spelt out its objections to Farrugia's nomination, but it had strongly criticised him in November over his handling of proceedings before the standards committee, which he chaired.

Grech's appeal on the eleventh hour comes just hours after Abela said that the PN's leader had taken the road of confrontation to steer attention away from the party's internal challenges.

“The Opposition Leader has unfortunately always taken a position where it is either his decision or no decision," he told journalists on Friday morning, also referring to the appointment of an Ombudsman and a commissioner for Standards of Public Life.