Ann Dingli surveys the 59th Venice Art Biennale following its opening week at the end of last month, highlighting this year’s spotlighting on forgone artists and histories, as well as Malta’s position in the midst of an overriding message of repentance.

Securing entry to the 2022 Art Biennale opening is something of an expedition – perhaps a compensatory gesture from the event’s organisers to Venice itself; an apology for the Biennale’s now widely acknowledged disruption to the city. The theme of reception and cultural hierarchy is symbiotic to all globally recognised art events.

You are admitted only if vetted, both administratively and in terms of charac­terisation. The right clothes, the right demeanour, the exact degree of interest will grant you access to what society deems to be the most fashionable and informed art crowd walking the planet at an exact moment in history.

Who and what is allowed to enter the realm of the culturally elite links directly to the curation of this year’s edition, which is assuredly threaded together by Cecilia Alemani. The Milk of Dreams, as she has named it, based on the book by surrealist artist Leonora Carrington, is an intensely feminine show. This is not purely because Alemani has lined its walls with the work of several of history’s overlooked female and non-binary artists, but also for the way it permeates the psyche of its viewers – steadily, with no upfront show of bravado. 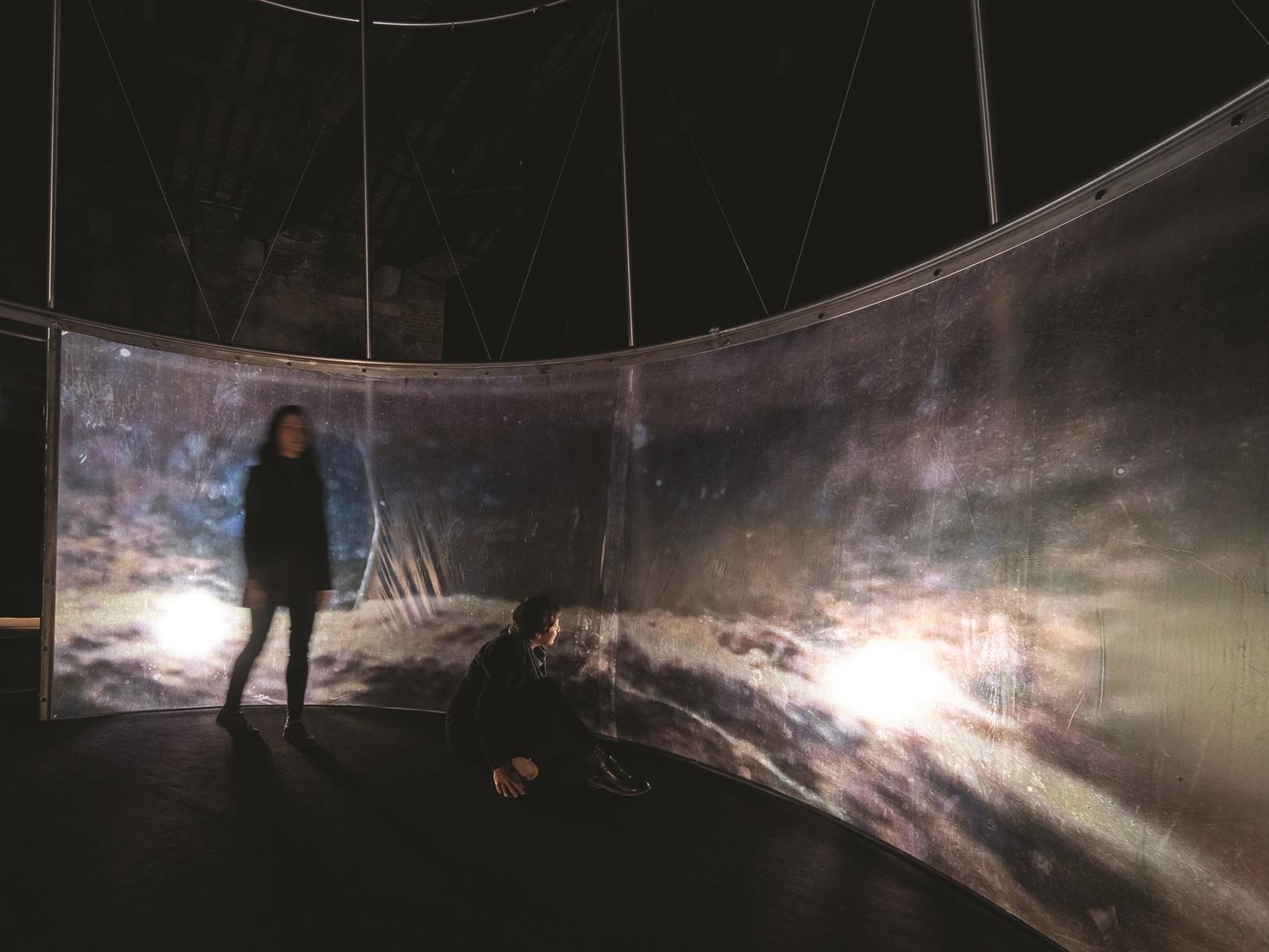 The Milk of Dreams makes itself a Biennale of the triumphant downtrodden, releasing the artworld from prevailing hegemonic dominions to embrace what has been traditionally perceived as ‘fringe’ or ‘otherness’. It’s not just female artists that are invited to rise to the surface, but all minorities, in both person and theme.

The fortitude of the outsider manifests differently across the Biennale’s grounds. In the Arsenale’s national pavilions, statements from Slovenia and Chile position nature as potent protagonist, resurging its selfhood through surreal and primal soliloquies. In different ways, nature excavates its own purity from a world that has lambasted it with torture and trauma. It does this also in the Saudi Arabian pavilion as a Teaching Tree – a giant and unyielding creature that is part natural, part mechanical.

In the Italian pavilion, the insistence of memory, ritual and ordinariness counteracts the insurgence of modern progress, building a temple to the universal reassurances that humanity clings to over time. In the Giardini, the doors of access are swung open by Simone Leigh in the US pavilion, whose neo-Palladian architecture is shrouded in thatch material, warmly inviting visitors to navigate space via the black feminine worldview. Leigh’s fecund sculptures contrast the racial intransigence of history, allowing African diasporic forms to narrate the experience of the present. 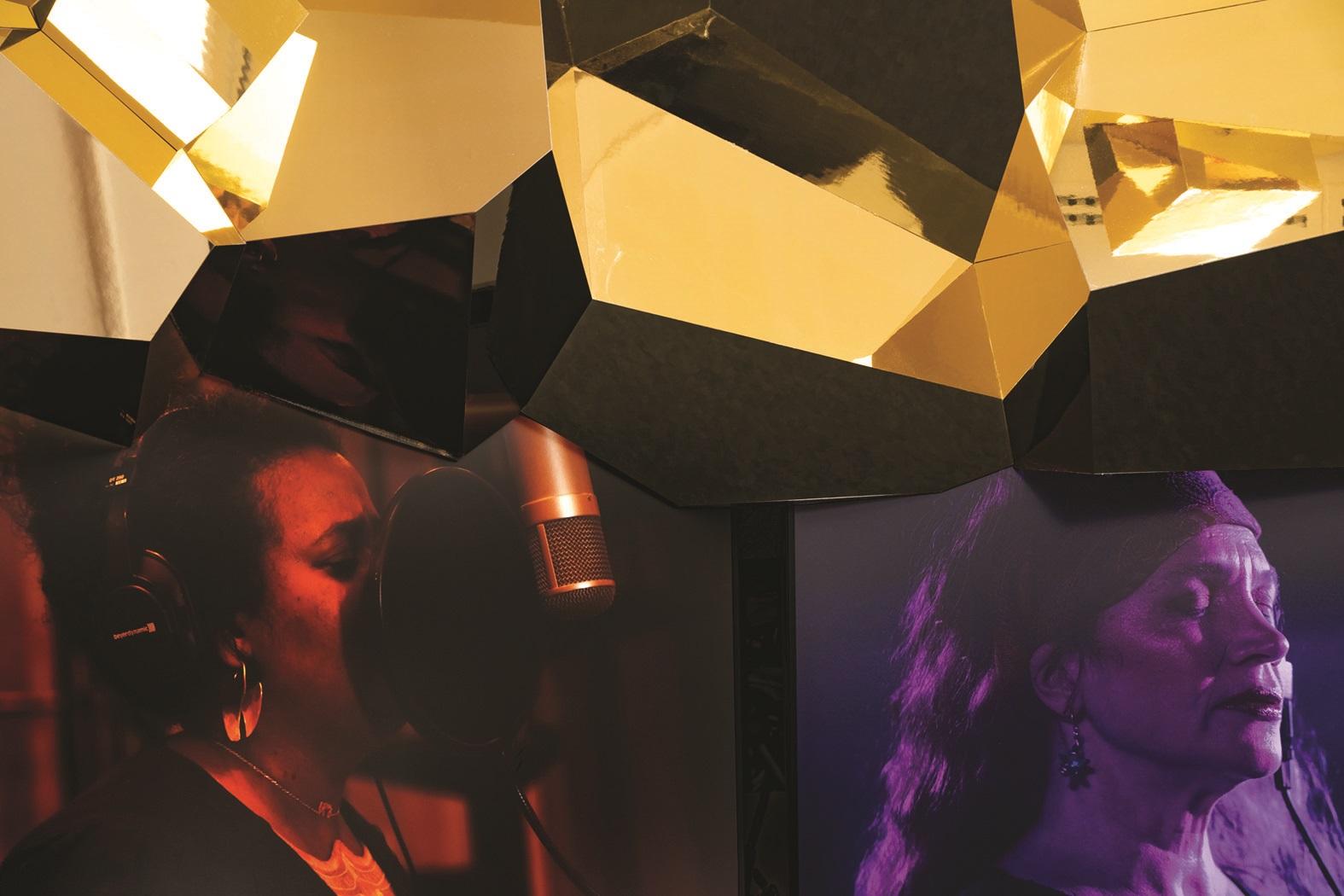 The idea of narration and re-examination comes to the fore in the Malta pavilion, commissioned by Arts Council Malta. Titled Diplomazija Astuta, its composition is brought to the Biennale by a team of curators and artists who are firmly tethered to the texture and matter of history.

The pavilion’s structure appropriates the configuration of Caravaggio’s 1608 painting of The Beheading of Saint John the Baptist, located in the Oratory of St John’s Co-Cathedral in Valletta, abstracting this historic composition into a new arrangement, with one suspended steel plane precisely representing the dimensions of the original painting, and seven water-filled plinths symbolising each of Caravaggio’s characters.

Above this darkened tableau, which is encircled by a thin metal perimeter, is an engineering system that melts steel against an aural interpretation of a Gregorian chant that contemplates the martyrdom of the Baptist. The timed sequence releases spears of molten steel in rhythmic succession down towards the ponds, creating light in the darkness through padded sounds of impact. Behind the central steel plane, a text titled Metal and Silence by Giuseppe Schembri Bonaci combines Hebrew, Greek, Latin and Aramaic from religious writings and carves their language into the metal.

In its format, the pavilion reads as predominantly masculine, its allusion to the Beheading harnessing the force and fallibility of manhood, enlisting both the painting’s subject as well as the well-known temperament of its author. 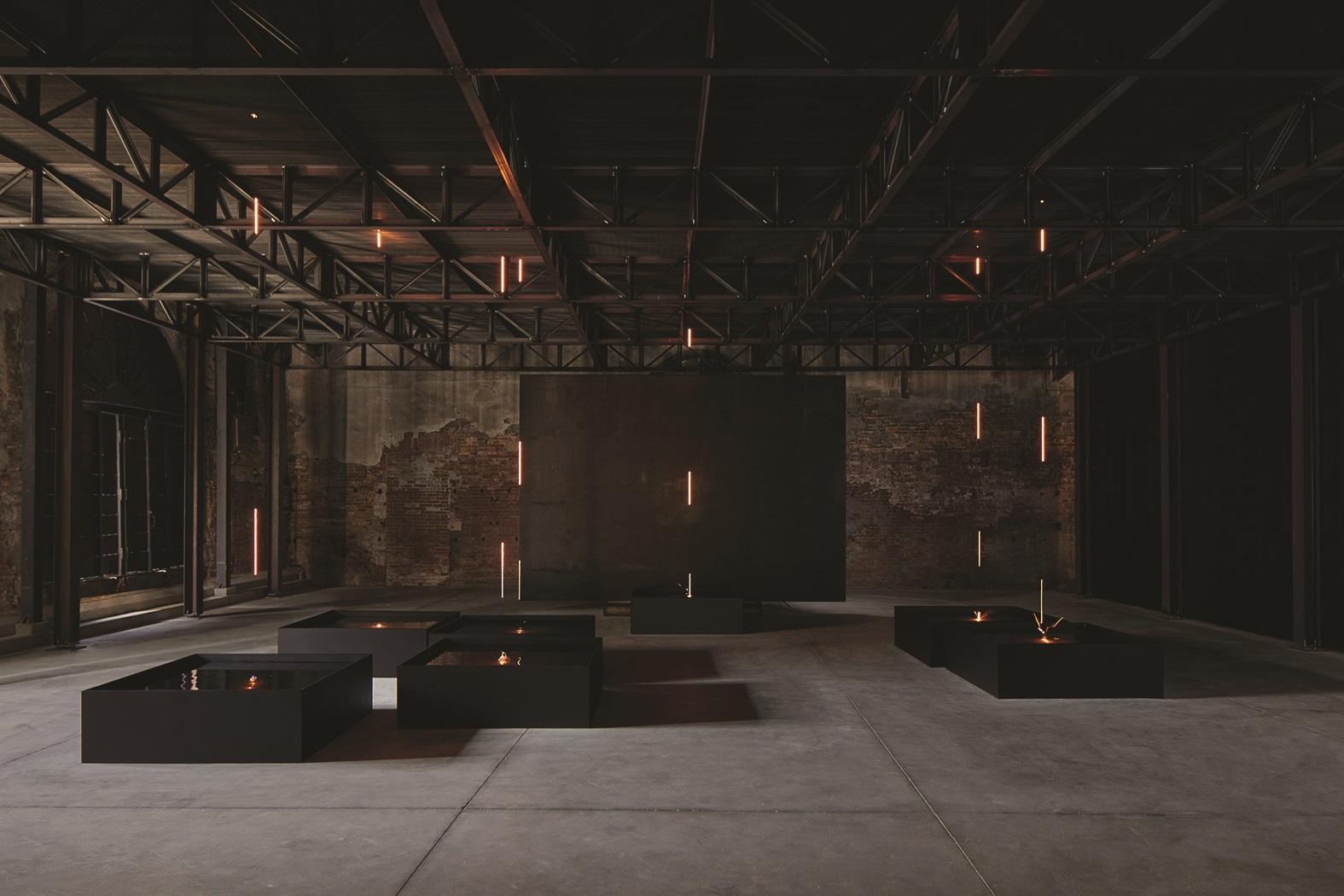 Yet despite the formidability of its material and the exactness of its composition – its remarkable precision wrought by the hands of contemporary artist Arcangelo Sassolino, who forms one part of the pavilion’s authorial trio – the intentionality of the exhibition speaks to the wider, contemplative ambition of the Biennale: to provoke viewers into a medi­tation of recognition and repentance.

The Biennale has many disparate agendas, but its greatest pursuit should be to forge new definitions of cultural desegregation

“What we posit is that the drop of steel is [St John the Baptist’s] blood, and the melted steel that is full of energy is captured by water as it falls,” Professor Keith Sciberras, who jointly curates the pavilion with Jeffrey Uslip, explains on site at the pavilion during the opening.

“In a matter of seconds, its embers disappear and fall like drops of coral into the water. And what we’re trying to say is that this moment will neutralise man’s ability to destroy himself. […] Because what if, after these hundreds of years, blood keeps dripping because of the injustices that exist? The space for reconciliation happens because water captures it and neutralises that energy.” 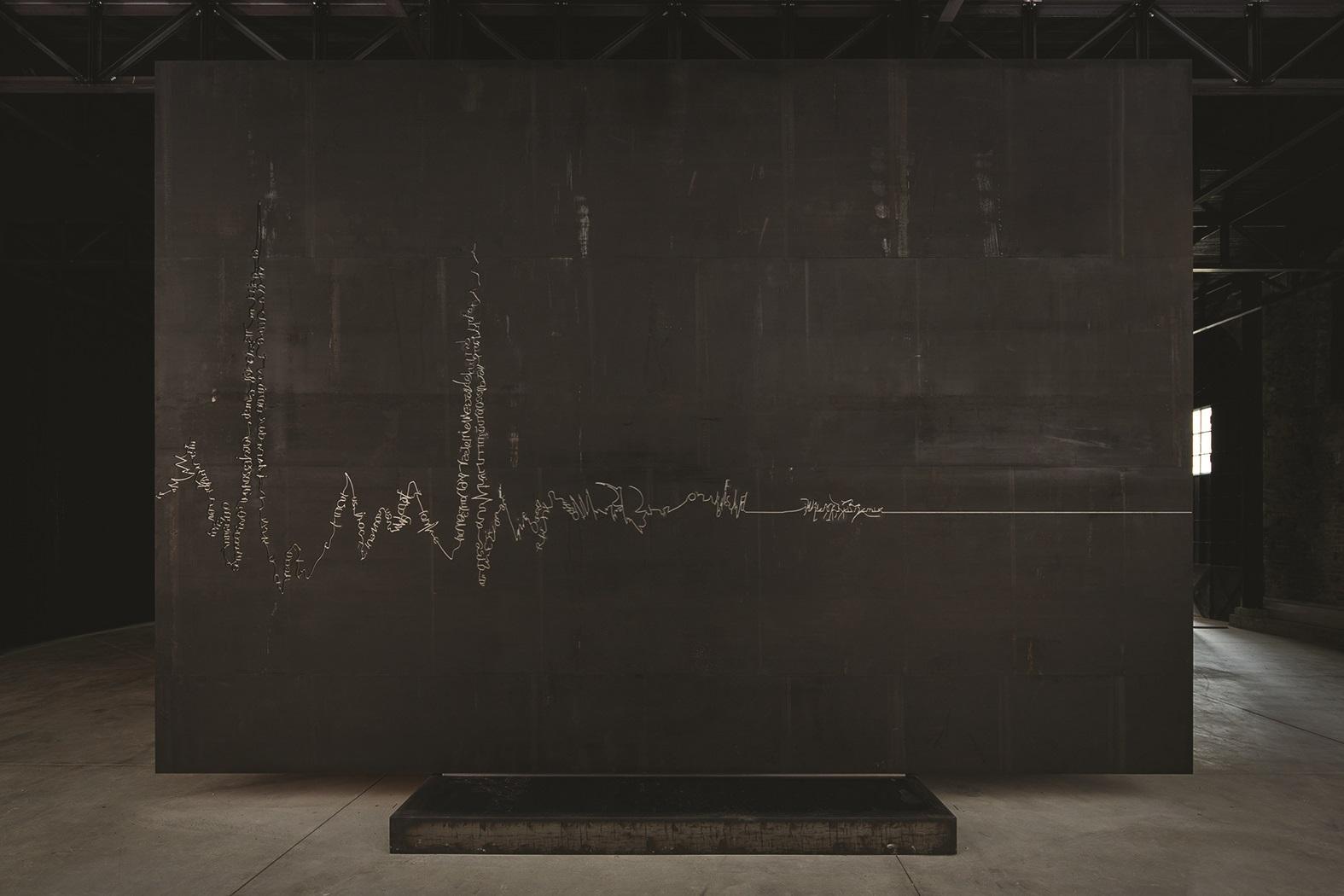 Brian Schembri’s percussive score is perhaps what gives the pavilion its greatest sensorial poignance, delivering its message of reparation through repeated beats that act as delicate counter to the steel – described by Sciberras as the “signature material of war”.

Its arrangement, which plays between timed intervals amidst ambient sound of visitors’ chatter, draws focus to that moment of neutralisation. This alchemy bet­ween sound, fire and steel as it coalesces into water, is what generates the pavilion’s curative impact.

Despite its thematic anchor being tied to history, Diplomazjia Astuta’s execution is grounded in the contemporary, which has prompted commentary from some of Malta’s local art contingent around the composition of the team, and whether its selection equates a missed opportunity to celebrate younger, more locally tied figures. But to subscribe too deeply to this thinking is to deny allegiance with the spirit of the Biennale’s wider message.

If Alemani’s curation teaches anything, it is that holding a white-knuckle grip on canonical ideas of gender, race and even nationalism is a deterrent to progress. The Biennale has many disparate agendas, but its greatest pursuit should be to forge new definitions of cultural desegregation, deconstructing silos of nationhood without detracting from their history, achievements and self-worth.

As Sassolino describes in his comments to this author – “Diplomazjia Astuta represents and emphasises the historical and geographical alliance that exists bet­ween Italy and Malta. There is nothing more powerful than art in offering a formidable passe-partout to bring together new worlds and different cultures.”

He defines the work on the pavilion as a “fruitful and constructive dialogue with curators Jeffrey Uslip for the contemporary piece and Professor Keith Sciberras for the historical part”, describing how “quite quickly, we formed a team with the brothers Giuseppe and Brian Schembri that worked very well in terms of practical and theoretical collaboration, and soon after it was as if we had always known each other, and this was really special.” 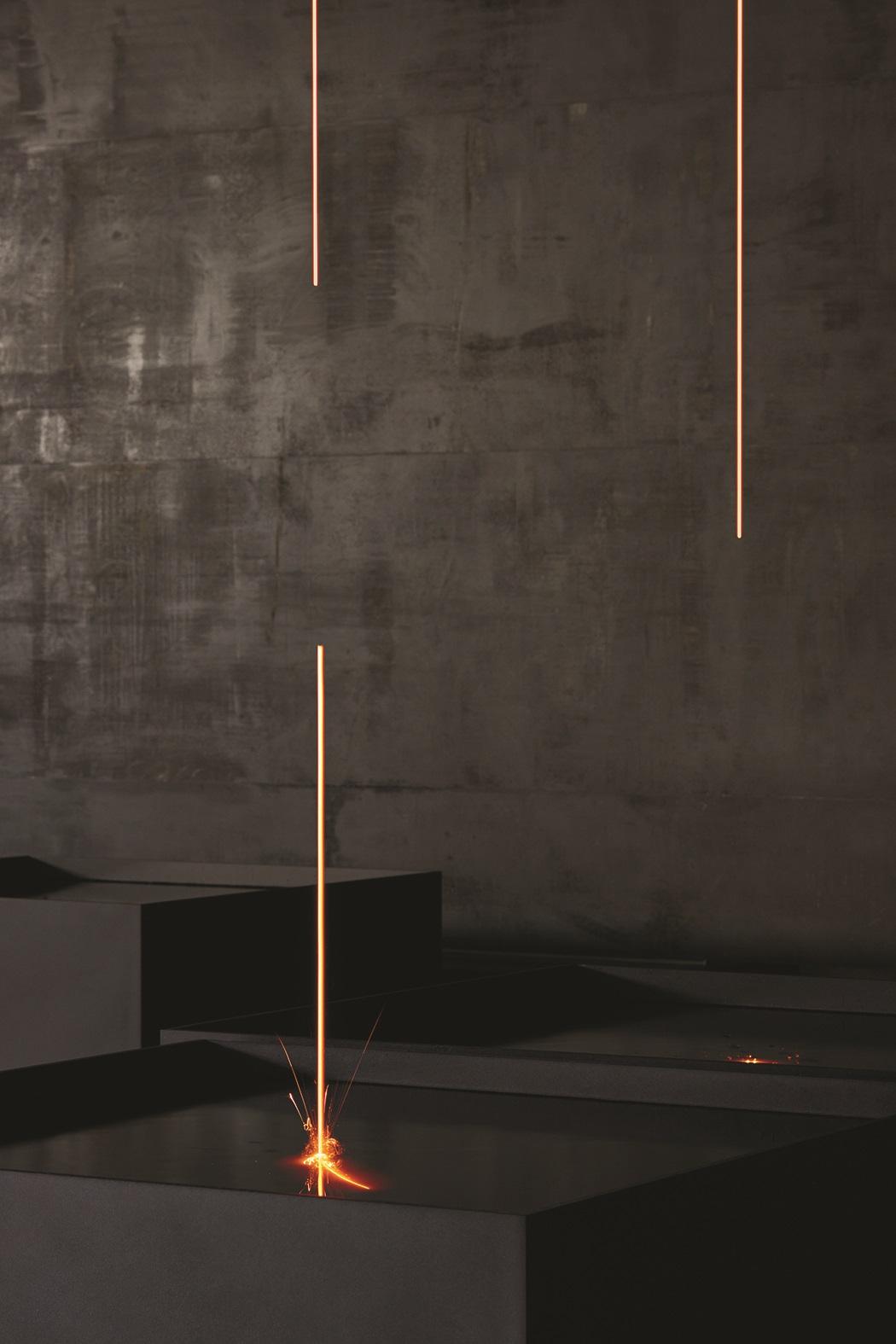 Malta’s artistic community is made up of talented practitioners who understand the legacy of Malta’s varyingly besieged, colonised and corrupted past, and who expose shades of its present in captivating ways through their own reckonings. But the strength of that community is most tremulous when it reclines into the habit of looking only inwards, talking only to itself – risking at worst cultural petulance and at best forgettable naval gazing.

Conversely, it is at its most brazen and profound when it engages with outside voices, cultural adjacencies and complex histories. Arcangelo Sassolino, Giuseppe Schembri Bonaci and Brian Schembri have done this.

Like Alemani’s global curation of this year’s Biennale, Diplomazjia Astuta is less about one group of artists’ perspective and more about the space that exists bet­ween art, people and people’s edited knowledge of history. Its power lies in its content; to which Sassolino remarks: “I already knew Caravaggio’s masterpiece in Valletta, but this was a special opportunity to get closer to it and study it thoroughly, and for this I am very grateful to the Malta Arts Council for having accepted our challenge”.

Elsewhere in the Biennale, what made the French and United Kingdom’s pavilions so well received was how fiercely they embraced a conglomerate of influence, channelling it into the strength of a message and not just its messenger. This should compel us to loosen the grip on who is allowed into the mainstream of art’s storytelling legacy.

The hero of the Biennale is definitively Cecilia Alemani, who has used the lens of surrealism to make more palatable a version of reality that is completely within our reach – a reality where the velvet ropes of the world of art are lifted, and stories of every representative of humanity can be heard. By highlighting these stories, Alemani has presented her own vision of neutralisation, peeling away the restrictive framing of past narratives, and offering up art’s incredible, moving opportunity for atonement.