One of Sliema’s most-talked about murals has been covered with a real estate billboard, prompting irritation among locals.

The mural, which symbolically depicts migrants’ struggles to cross the Mediterranean sea, was painted in 2015 as part of the Malta Arts Festival.

At the time, one of the festival organisers had said that it would remain for one year, until the subsequent edition of the event.

As the years rolled by and the mural remained there, it became an iconic sight for pedestrians strolling along Tower Road.

Created in 2015 by French street artist MTO, the eye-catching mural was “the only sign of hope amid a sea of concrete”, one Sliema resident told Times of Malta.

“There’s hardly any other notable street art in the town,” they said.

'Wall is about to vanish'

On Wednesday, it ended up obscured by a billboard urging would-be entrepreneurs to open their own Simon Mamo Real Estates franchise.

The company told Times of Malta that they also owned the wall it was affixed to – and that the wall was destined to disappear in the next few months anyway.

“The building belongs to us,” a Simon Mamo spokesperson said. “We had no problem with the graffiti remaining there for these past four years and left it there undisturbed. But that wall will soon vanish as a hotel is being built in the vacant plot next door,” they said. 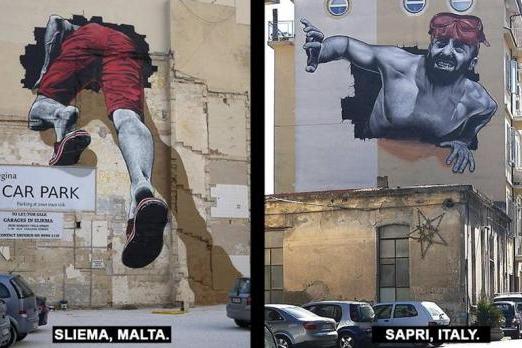 Two parts to the mural, in two different countries.

The artist who painted the mural was unimpressed by the development.
“Savagely covering a political mural speaking about migrants struggles to cross Mediterranean sea with an ugly real estate advertisement which looks like it’s getting out of the character’s butt couldn’t make more sense,” MTO told Times of Malta.

The mural is part of a street art diptych created by MTO, with the Sliema rear image twinned with a frontal mural of a bearded man emerging from a wall in Sapri, southern Italy.

“Malta takes the dead and sends the living to Italy”, MTO had written by way of explanation back in 2015.