The Gozo Ministry will be funding exhibitions about hunting in state schools, sparking outrage from BirdLife.

Heads of schools in Gozo were informed of the exhibitions through a circular sent out by the director-general of the Department of Education Services.

The circular said that the exhibitions are intended to "show the facts about legal hunting in Malta. ” The exhibitions should be set up in an open indoor space, “preferably at the school entrance or in a hall”.

The exhibitions are being organised by Kaċċaturi San Ubertu, a local hunting lobby group.

Gozo Minister Clint Camilleri, whose portfolio also includes hunting and trapping, is a licenced trapper and vocal supporter of the controversial pastime.

News of the school exhibition sparked outrage among conservation NGO BirdLife Malta, which said that it was “disgusted and alarmed” that the Education Department had signed off on “the promotion of killing birds in schools.”

“It is incredible that in 2023 the education authorities want to promote the use of a firearm for the killing of birds among schoolchildren. It is shameful that this is being done with the blessing of the Education Ministry and financed by the Gozo Ministry, which is responsible for hunting,” it said. 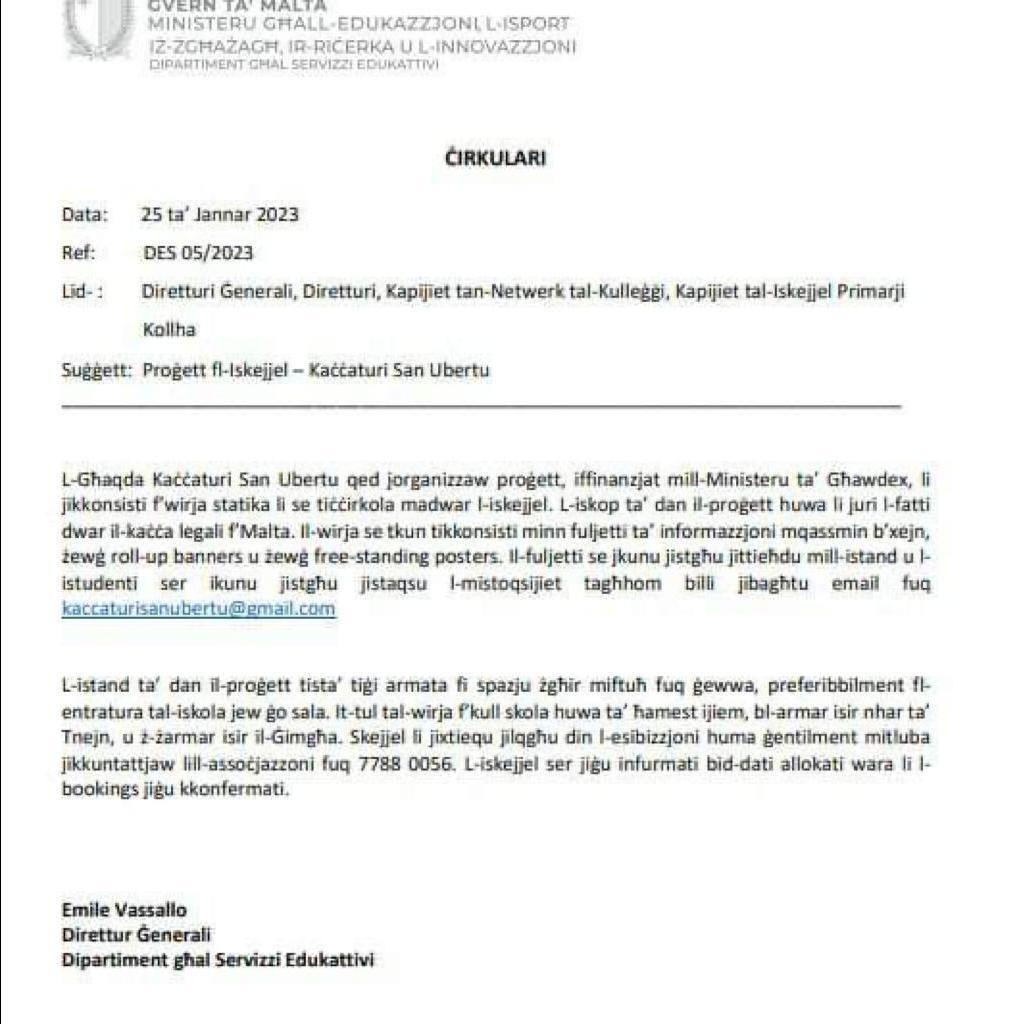 The circular distributed to schools

Speaking to Times of Malta, BirdLife CEO Mark Sultana said that the decision was “baffling”.

“The world over people are doing their utmost to tackle issues of conservation and in Maltese schools, we’re going to show children that it's actually cool and okay to kill birds with firearms,” he said.

“This circular was sent just one day after a hunter was taken to court for allowing his son to use a shotgun that almost injured him, and the day after the Prime Minister emotionally said that he was scared of letting his daughter walk around Valletta following a gang incident between minors,” he continued.

“We already have a problem with young children being exposed to firearms in their homes in relation to hunting, with the Church letting hunters shoot on the parvis during the feast of Saint Julian, now we’re going to have it in schools as well.”

“It is unethical and immoral and the repercussions could be disastrous.”

BirdLife said it has filed a complaint with Education Minister Clifton Grima and has asked for the decision to be reversed.

It told the minister that the killing of birds in Malta is only done for individual enjoyment and in some cases also for monetary gain.

We have a right to educate children about the facts - hunters

When contacted for comment, Mark Mifsud Bonnici, president of Kaċċaturi San Ubertu, said that the exhibitions were exclusively about legal hunting and that the group had obtained funds by applying through an open call for projects.

“Legal hunting is a pastime enjoyed by seven million people around Europe. BirdLife has its own platform in schools in which they indoctrinate children against hunting. Some children went home telling their fathers that they were killers, he said.

“Much like you go fishing to eat fish, hunting a bird to cook at home is no different, but it's only the latter that is considered to be animal cruelty for some reason.”

“We have every right to educate children about the nature of legal hunting.”

Mifsud Bonnici said that the posters contain pictures of cooked birds, lists of protected species that cannot be shot and condemnation of illegal hunting as well as information about different breeds of hunting dogs.

“We have always condemned illegal hunting because it is damaging to those of us who observe the law and carry out our hobby according to the rules,” Mifsud Bonnici said.

Addressing the issue of firearms, he said the exhibition does not intend to encourage children to use firearms but instead informs them that hunting is a pastime that they can practice when they are of age.