From trolls and witches to fried caterpillars and rollerblading to church, Christmas traditions can be bizarre, says Terence Mirabelli

Christmas is a time of sugar and spice, and all things nice. It’s a time of traditions; of doing things because that’s what we do at this time of year. We don’t question them; we just do them because it’s traditional to do so.

Most local Christmas traditions are, well, ‘sweet’ and ‘nice’ such as the child’s sermon (il-priedka tat-tifel).

This uniquely Maltese tradition is said to have begun on Christmas Eve in 1883 in Luqa when altar boy George Sapiano delivered the sermon during Midnight Mass. Traditionally, a boy or girl of between seven and 10 tells the story of the nativity from the pulpit.

Not all traditions are so charming, however. For the past decade or so, we have seen cribs erected annually at roundabouts.

“How sweet”, you may say, but what has become customary – not to say traditional – is for the Baby Jesus figurine to be stolen from some of these al fresco cribs. No doubt this will occur again this Christmastime.

This is mild compared to some traditions around the world. The evening before the feast of St Nicholas – December 6 and the day when Christmas trees in homes should be decorated – Krampus appears. He’s an unpleasant fellow and if children have been naughty, forget presents from Santa Claus, Krampus will come for you.

Originated in the 16th Century in the Tyrol region of Austria as the evil counterpart of St Nicholas (aka Santa Claus), Krampus dons a grotesque wooden mask, wears animal skins and has bells tied to his costume so he can be heard in the dark. He wields a bundle of long sticks, often mistaken for a broom, and has a sack to carry away naughty children.

Vienna and many towns in Austria hold annual Krampus parades, where young men in these horrific costumes continue to terrify children.

Four years ago, five youngsters were injured by Krampus’s sticks and one had her arm broken. Elsewhere in Austria, community workers had to forewarn Iraqi and Syrian refugee children about Krampus and his evil behaviour.

More recently several towns in Czechia, notably Kaplice and Cesky Krumlov, have adopted the Krampus tradition and hold festivals in his dubious honour.

Krampus may wield a bunch of sticks that look like a besom, but in Norway people hide their brooms in the safest place in their homes on December 24 to prevent them from being stolen.

Every year an estimated 3.8 million families throughout the country make for their local KFC during the Christmas season

It’s a tradition that goes back centuries, to a time when folk believed witches would come on Christmas Eve and pinch their brooms to fly on.

Norway is not the only country that incorporates witches in its Christmas traditions. Italy has its Befana – a crooked old woman who delivers presents on the eve of the Epiphany and travels on a broomstick. She is also known as the Christmas witch and apparently doesn’t visit Norway often.

Unlike Krampus who takes naughty children away, the Befana leaves a lump of coal for the bad kids and presents for the good ones – in Sicily, it’s a stick she leaves for the naughty ones. Nowadays, some shops sell carbone – black sugary sweets in the shape of lumps of coal. 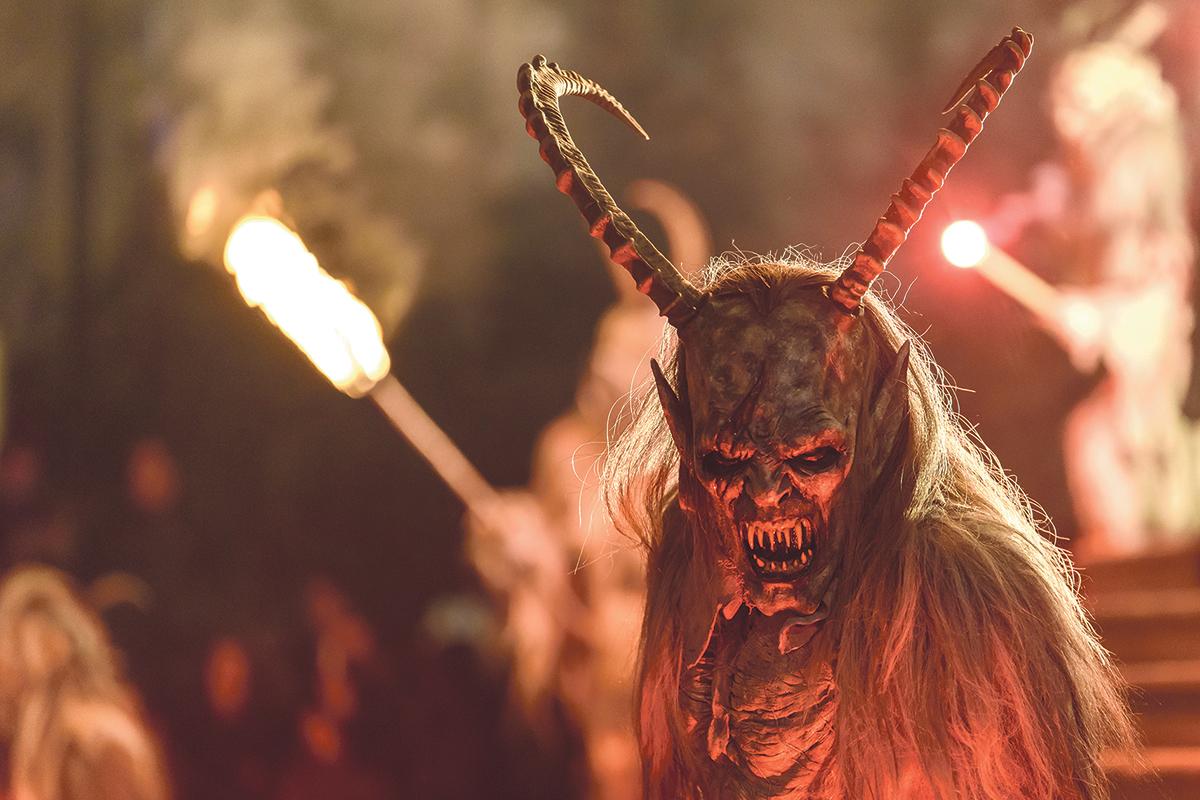 Krampus is the evil counterpart of St Nicholas.

The Befana tradition is ancient. When the three kings were following the star that would lead them to Bethlehem, they stopped at a village where its inhabitants wanted to join them except for one old woman who was too busy with her housework.

The following day she realised her mistake and frantically ran after the three kings with gifts for the newborn, still clutching her broom. But she was too late.

Ever since, on the eve of January 6, the Befana – a corruption of the Greek word ‘epifania’ – flies from house to house on her broomstick delivering the presents she didn’t give Baby Jesus.

Icelandic kids, meanwhile, have it good. There, children get presents over the 13 nights leading up to Christmas. Then again, it depends on how good they’ve been. Thirteen brothers from a family of trolls, known as the Yule Lads, who live in the mountains of Iceland travel long distances to visit children and give them gifts. Each brother travels on a different day, with the first – Stekkjastaur – on December 12 and the last – Kertasníkir – on Christmas Eve.

In Iceland, kids don’t have Christmas stockings but place a shoe by their window along with each troll’s favourite snack. Bjúgnakrækir, for instance, arrives on December 20 and is fond of meat, cheese and biscuits. If a child has been good, they find a present, if not it’s a rotting potato they get. And if they’ve been especially naughty watch out for Gryla, mother of the 13 trolls. She’ll swoop down and boil them into soup. Jólakötturinn, Gryla’s pet cat, will also eat anyone who doesn’t have a new piece of clothing at Christmas.

Christmas is a time of over-indulgence. We all eat more than we should, perhaps not naughty children, but certainly the traditional turkey and all the trimmings, Christmas pudding or log, mince pies and possibly a slice or two of panettone.

Japan, a country that doesn’t celebrate Christmas or enjoys its culinary delights does, however, partake of another bird for the occasion – chicken. Specifically, a KFC meal. This odd tradition began in 1974 when Kentucky Fried Chicken, as it was then known, launched a marketing campaign with the slogan ‘Kurisumasu ni wa kentakkii’, meaning ‘Kentucky for Christmas’. The Japanese loved it, and still do – every year an estimated 3.8 million families throughout the country make for their local KFC during the Christmas season for a special Kurisumasu ni wa kentakkii.

South Africans have an altogether more adventurous dish to enjoy on Christmas Day – fried caterpillars. These are not just any creepy crawlies but pine tree emperor moths, also known as Christmas caterpillars because of the myriad colourful spots on their backs. These 10 to 12cm long creatures are fried and are said to bring good luck to whoever eats them.

Ukraine also has a tradition involving bugs. There, however, they don’t eat them but place spider webs on their Christmas trees. According to local folklore, spiders took pity on a widow who could not afford to decorate her tree and spun beautiful webs on it, to the delight of her children. Nowadays the webs are artificial, yet the tradition persists.

Quaint as this Ukrainian custom may be, in Venezuela they have a most bizarre Christmas tradition. It all starts quite normally, from December 16-23, Venezuelans attend early morning mass. During this time noisy petards are let off (reminiscent of Maltese festas) and church bells rung to awaken worshippers.

However, for some unknown reason they make their way to church on roller skates, the sportier types whizz by on rollerblades. This tradition has become so popular that, in Caracas, many roads are closed to traffic for safety reasons.

On Christmas Eve mass is celebrated at midnight, known locally as the Miso de Gallo or rooster’s mass, and is attended by thousands with their skates. Perhaps a tradition we should adopt here – it would make looking for parking so much easier.