Black Americans have played a crucial role in shaping the nation’s cuisine and yet they have rarely been given credit for their contributions – some of which are considered among the country’s most iconic dishes.

As conversations over racial injustice prompt a re-examination of the nation’s cultural record, Black chefs are seizing the moment to demand the exposure they deserve in an industry where many still struggle to break out.

The institution of slavery permanently transformed America’s culinary landscape, and its ripples are still felt today.

Other commonly found ingredients, like peanuts, okra and watermelon, were brought over from Africa, says historian Kelley Deetz.

Her 2017 book Bound to the Fire: How Virginia’s Enslaved Cooks Helped Invent American Cuisine digests some of America’s most enduring culinary traditions.

“It was the enslaved cooks who cooked in the plantations of the most important people in America,” Deetz said – singling out founding fathers Thomas Jefferson and George Washington.

Deetz said that while slaves would also make European food, African dishes were beginning to make their way into cook books by the 19th century.

Ingredients and know-how imported from Africa introduced the American palette to complex and labor-intensive dishes like oyster stew, gumbo, jambalaya and fried fish.

But the slaves who toiled in chefs’ aprons were routinely omitted from cook books in favor of the white heads of the households where they worked, the historian added.

“It’s time to give credit where credit’s due,” she said.

“We literally built this place, so we deserve our spotlight.”

It is rare that a Black chef is welcomed into the upper echelon of America’s celebrity chefs, among such internationally renowned culinary juggernauts as the late Anthony Bourdain or fellow television personality Emeril Lagasse.

Grant says he is not shocked by the double standard but wishes his fellow culinary artists of color were not continually overlooked and judged incapable of advancing in the industry. 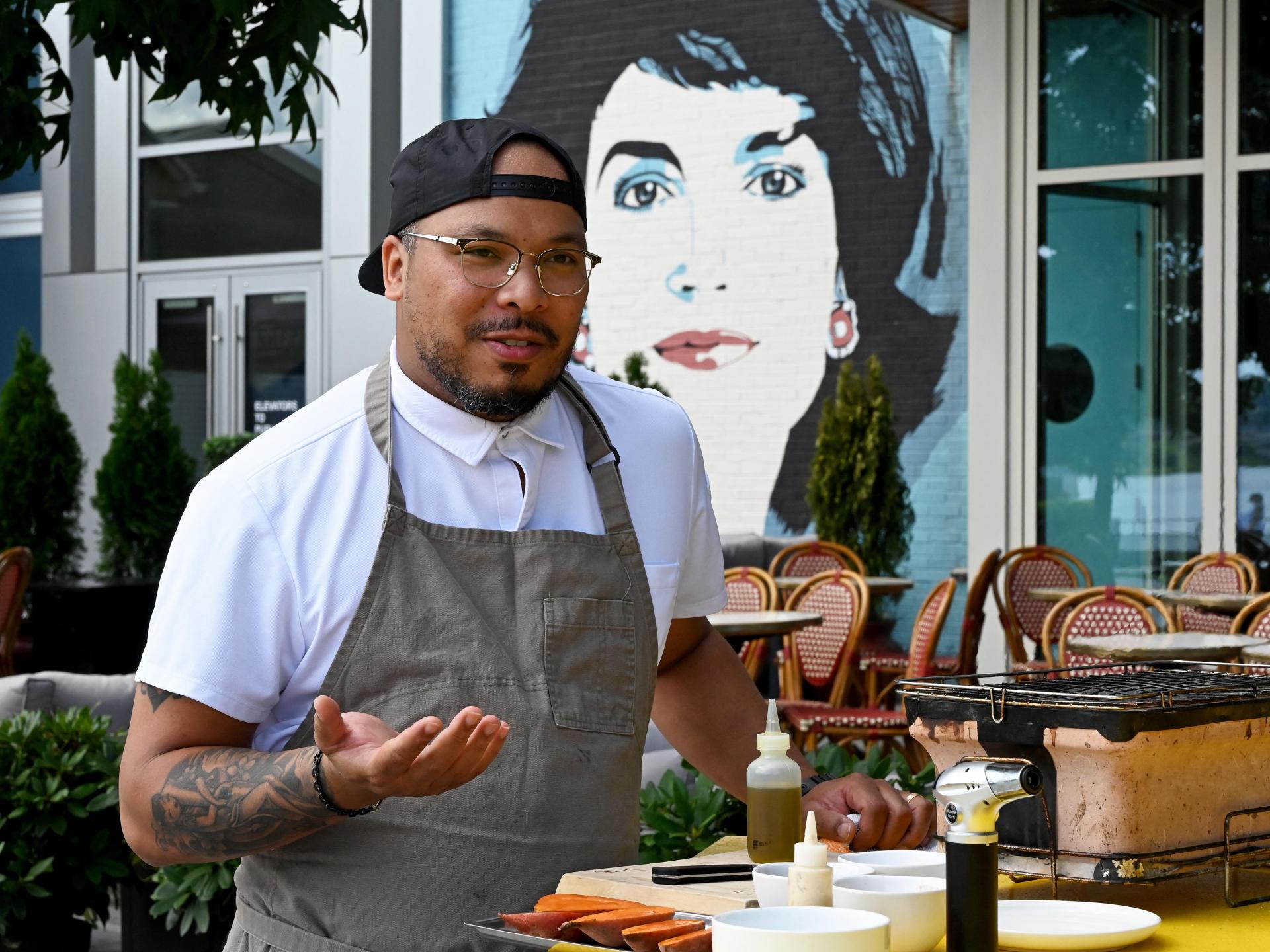 Executive chef Jerome Grant speaking about African American cuisine, its origins, ingredients and influence on American cuisine during a cooking demonstration in front of the American bistro Jackie in Washington, DC.

Born to a Black father and Philippine mother, Grant recalls experiencing racism in the kitchen. In one instance, he was told his skills were “pretty good for a Black chef.”

Grant says Black chefs often feel stereotyped, constrained by an expectation that they will only be able to work within the parameters of one particular cooking tradition.

At work, he demands complete creative freedom but tries to honor the history of Black cuisine through his creations by telling a story “of the hands that built America”.

His menu prominently features oxtail, a cut historically judged as inferior and given to slaves, who nevertheless were able to craft “these awesome, amazing dishes” from the offal.

Grant feels Black chefs are at last beginning to receive their due recognition, although the equality gap hasn’t gone away.

United by the mission of spreading awareness of Black excellence in cooking, Erinn Tucker and Furard Tate founded “DMV Black Restaurant Week,” which promotes Black-owned restaurants in the Washington area.

Tucker says the industry is still plagued by some of the more egregious cliches that have always mischaracterized Black cuisine: that it is too fatty or limited to convenience food drenched in oil.

Fried chicken, it turns out, was cooked exclusively for special occasions until it was assimilated into the wider American culture by fast food companies, Tucker says.

Yet growing awareness of America’s Black culinary heritage has emboldened gastronomers to celebrate its legacy.

“What has happened in the last, maybe 10 or 15 years, is that there is a revolution or a renaissance,” Tucker said.

A new Netflix docuseries, High on the Hog: How African American Cuisine Transformed America declares Black food to be synonymous with American food.

The series is based on a book of the same name by culinary historian Jessica Harris, who specialises in African diaspora cuisine.

Four episodes trace the lineage of African-origin cooking from west Africa to Texas, weaving barbecues and cowboys into the Black cultural fabric.

“It touched a nerve,” Harris said of the film, which enjoyed critical success.
Harris says it is vital that films, books and documentaries take up these subjects, as “Black history is lesser known and not widely shared.”

The author hopes this cultural moment is a portent of long-lasting change and recognition.

“Even us, Black people, we are learning about ourselves,” she said.

“The history is still practically unwritten. So we must research, review and question everything.”