The Death of Stalin is a comedy about the death of Stalin. Yes, you read that right… Joseph Stalin, Secretary General of the USSR, a tyrannical dictator who struck abject terror in the hearts of the population and those closest to him. Thirty-three years after ruling over the Soviet Union with an iron fist, he died after suffering a stroke on March 2, 1953. His death ignited a fight for his job among his closest aides as they tried to manoeuvre themselves into that most prime of positions with very nefarious means… anything to obtain that sort of power.

These facts are historically accu­rate. Scottish writer/director Armando Iannucci (who, among others, has created British political comedy The Thick of It and the American one Veep) coats the events that unfolded in the days between Stalin’s death and his State funeral with a thick layer of satire as Stalin’s second-in-command, the head of the secret police, and various cabinet members jockeyed for position. The brutal legacy of the Stalin regime is hardly the stuff of comedy. Kudos to Ianucci, who co-wrote the script with David Schneider and Ian Martin, for creating a piece that successfully negotiates a balance between jet-black come­dy and horrific political drama.

Thanks to the razor-sharp wit of the dialogue coupled with the farcical antics of the characters, you cannot help but laugh as they faff about, helplessly trying to deal with the immediate aftermath of Stalin’s death (one of them turning up in his pyjamas) or hopelessly getting things organised for the funeral while plotting away.

The horrifying reality of this world is not far away, as in the background citizens are being marched off by the authorities to face questioning, torture, and in many cases, undoubtedly death. The head of the NKVD, the security forces’ internal affairs division, oversees the arrest and imprisonment, questioning, torture, banishment to gulags and oftentimes death of people, the majority of whom were undoubtedly innocent. And for all the comedy gold that shines throughout the film, it ends on a remarkably dark note.

Many of the situations depicted in the film seem too outlandish to be true, yet the filmmakers avow that these are completely accurate. They started from a live concert broadcast on radio that had to be performed again as Stalin demanded a recording of it. The harried radio producer Andreyev (Paddy Considine) coerces the orchestra and performers to perform again... bringing in unsuspecting citizens from the streets to make up the audience numbers. The search for a doctor to look in on Stalin when he suffered the stroke was hampered by the fact that most doctors had been thrown in jail.

Ianucci has assembled a terrific ensemble cast of British and Ame­rican actors. None put a foot wrong and all of them absolutely nail the darkly satirical tone of the piece. It is a collection of brutal, heartless, ambitious, power-hungry and ultimately morally and financially corrupt characters. And yet, in their ensemble’s collective spot-on performances, you can’t help but engage with them.

Steve Buscemi is the minister for agriculture Khrushchev, less concerned with his own ambitions than he is horrified by the actions of the seemingly amiable yet thoroughly thuggish Beria (Simon Russell Beale), the head of the secret police. Jeffrey Tambor projects perfect befuddlement as Malenkov, Stalin’s number two, pushed temporarily into the number one spot and clearly at a loss in his new position as he fusses about his appearance more than he does about affairs of State.

The cast is rounded up by former Python Michael Palin as Molotov, a Communist party apparatchik, Jason Isaacs as the gauche Field Marshall  Zhukov, Paul Whitehouse as Kikoyan, the dapper minister for foreign trade, Andrea Riseborough as Stalin’s daughter Svetlana and Rupert Friend as his wildly unpredictable son Vasily. 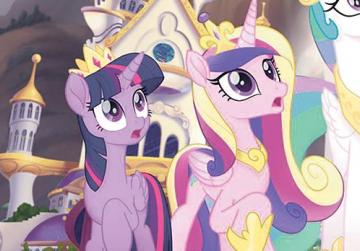 My Little Pony: The Movie (Class U): After a dark force conquers Canterlot, the Mane 6 embark on an unforgettable journey beyond Equestria where they meet new friends and exciting challenges on a quest to use the magic of friendship to save their homeland.