Usain Bolt's bid for an unprecedented Olympic sprint double double in the 200 metres is the undoubted highlight of the seventh day of athletics action at the London Games today.

The 25-year-old came to Britain saying he wanted to establish himself as a "legend" of track and field by becoming the first man to win the 100 and 200m at successive Games and he completed half the job on Sunday. 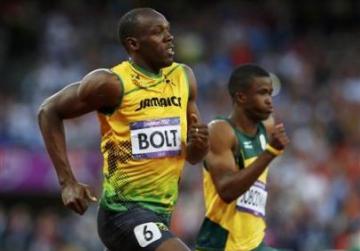 The 200m has always been the Jamaican's favourite event and after jogging through the semi-finals in 20.18 seconds on Wednesday, an assault on his own world record of 19.19 cannot be ruled out.

His compatriot Yohan Blake, who beat Bolt in the Jamaican trials and ran the second fastest time in history last year (19.26), was the quickest qualifier (20.01) and will be looking to go one better than the silver he won in the 100.

Although Bolt's air of invincibility was dented by that defeat in the trials, David Rudisha has remained absolutely dominant in the 800 metres and looks a safe bet in the final of the two-lap race.

The Kenyan has fallen short in his attempts to better his own world record of one minute 41.01 seconds over the last two years but, if the London rain stays away, he could do it on Thursday.

There is no such dominant performer in the men's triple jump but world champion Christian Taylor and his fellow American Will Claye, the world indoor champion who won a bronze in the long jump on Saturday, should be in the mix for gold in the sandpit.

Women's javelin world record holder Barbora Spotokova has been on the podium at every major championship since 2006 and will be confident of defending her Olympic title, especially after going longest in qualifying.

The fifth and final medal to be decided today is in the decathlon, which finishes with 110 metres hurdles, discus, pole vault, javelin and 1,500m.

World record holder Ashton Eaton of the United States is the man to beat and he led compatriot Trey Hardee by 220 points after yesterday's five events.