All bond issuers on the regulated main market and the companies that act as guarantors to several of the issuers have now published their annual financial statements and also their Financial Analysis Summary (FAS), which include projected financial statements for the current financial year.

As stated in previous articles, it is important for the investing public to monitor the financial strength and the level of creditworthiness of a bond issuer and the guarantor (when applicable) on a continual basis to ensure they are well aware of any changes in the financial metrics of the companies to which they are exposed.

The most important ratios to monitor which measure the creditworthiness of an issuer or guarantor are the interest coverage ratios and the gearing level. The latter metric can be calculated in various ways.

As explained in my article a few weeks ago, the introduction of IFRS 16 as from January 1 generally leads to an improved interest coverage ratio (given the higher increase in Ebitda than finance costs) and a weaker net debt to Ebitda ratio (given the higher increase in borrowings than in Ebitda). Since companies have not restated their 2018 financial statements, the comparison of such ratios from one year to the next may be misleading for those companies impacted by IFRS 16.

As such, in today’s article I will be basing the analysis of the bond issuer rankings by displaying the interest coverage ratios of selected companies based on the projected financial performance for the current financial year which in most cases relates to the 2019 financial year ending in December.

Many of the companies ranking as the most creditworthy issuers from an interest coverage perspective should not be a surprise to the market given their consistently strong performances in recent years which also placed them among the top positions over the past years.

Simonds Farsons Cisk plc ranks in top position with an interest coverage ratio of almost 21 times for the current financial year to January 31, 2020, as the company expects to generate a slight increase in Ebitda of €23.6 million while net finance costs are only €1.1 million given the relatively low level of net debt of €33.1 million.

Tumas Investments plc has also been another consistently strong performer in recent years despite the fact that the business of the guarantor Spinola Development Company Ltd comprises property development activities (apart from the hospitality division through the operation of the Hilton Malta Hotel) which tends to lead to fluctuations from one financial year to another given the recognition of property sales only once the final deed of sale is entered into.

The estimated interest coverage ratio of the guarantor to the bonds of Tumas Investments is expected to be 12.8 times in the current financial year. The estimated Ebitda of Spinola Development of €32.1 million for 2019 mainly comprises an amount of €16.6 million from the hospitality division and €12.6 million from property development activities following the recognition of the second tranche of revenue pertaining to the transfer of the ownership title of the tower adjacent to the Portomaso Business Tower in 2018. 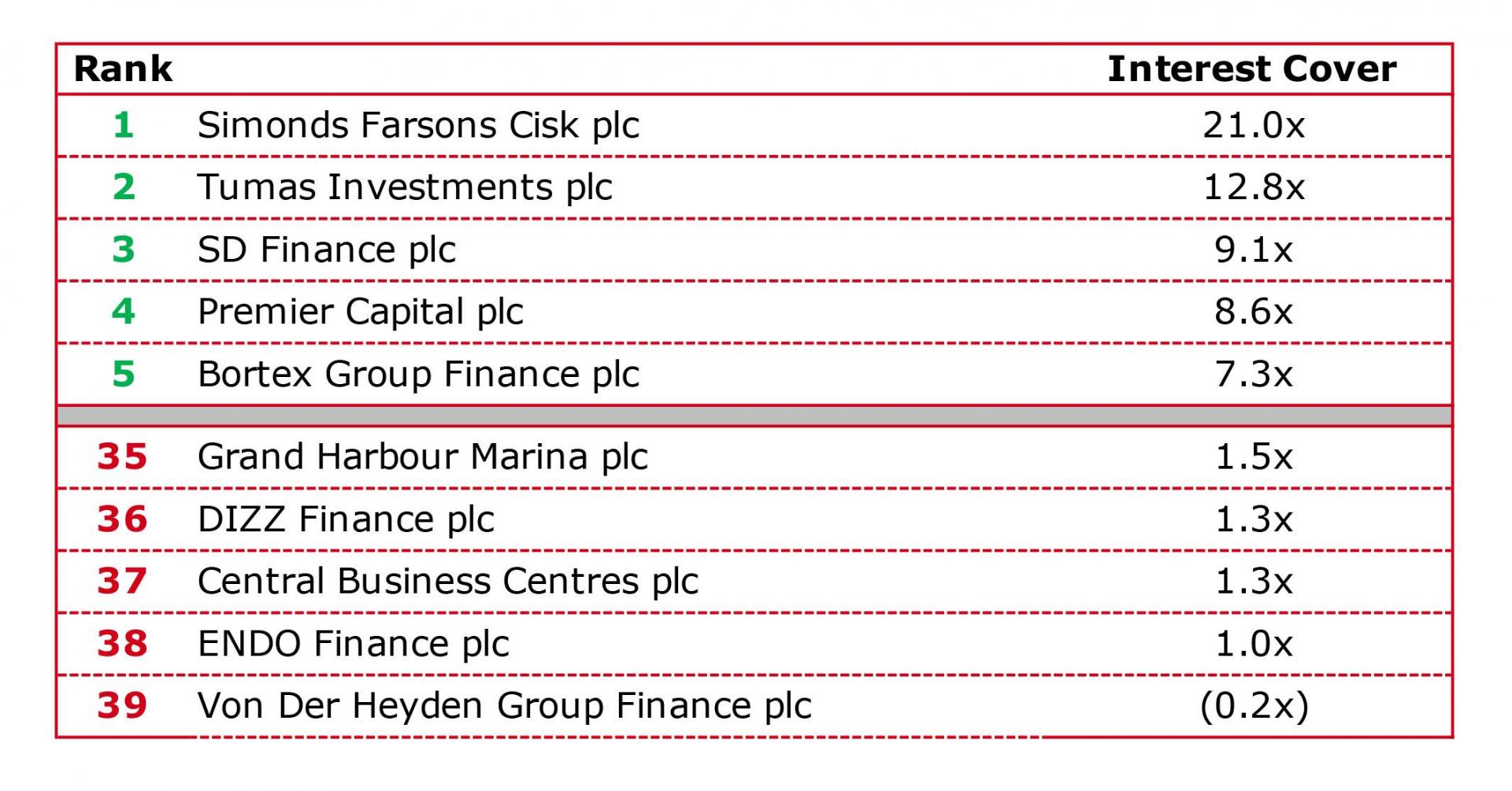 SD Holdings Ltd as guarantor to the bonds issued by SD Finance plc very recently published its financial statements as at March 2019. The group’s principal activities include the ownership and operation of the db Seabank Resort and the db San Antonio Hotel.

The company registered another record financial performance with Ebitda, climbing by 22.5 per cent to €26.4 million, thereby resulting in a significant improvement in the interest coverage ratio to 9.1 times given net finance costs of “only” €2.9 million. The projected financial performance for the current financial year to March 31, 2020, is not yet available since the company has until the end of September to publish its FAS.

Premier Capital plc, which is the McDonald’s franchisee in Romania, Greece, the Baltics and Malta and the main operating asset of the Hili Ventures Group, has an estimated interest coverage ratio of 8.6 times in 2019 as Ebitda is expected to amount to €57.1 million with net finance costs of €6.6 million, mainly comprising interest on the €65 million bonds in issue. Premier is one of the only companies to have also published its 2020 financial projections. The company expects its Ebitda to rise by a further 11.5 per cent next year to €63.7 million as overall revenue is anticipated to grow by a further €29.7 million (+8.8 per cent) to €367.7 million.

Possibly, the biggest surprise to many would be the ranking of Bortex Group Finance plc. The FAS published recently indicates that the guarantor Bortex Group Holdings Co Ltd estimates that its Ebitda will jump from below €1 million in the year ended October 31, 2018, to over €4 million during the current financial year following the completion of the newly-refurbished Hotel 1926 which will begin to contribute to the group’s financial performance.

The Ebitda of Virtù Maritime Group is estimated to climb by 32 per cent to €18.5 million during the current financial year largely on account of the recognition of revenue amounting to €6.35 million from the charter of the HSC Jean de la Valette as from early June 2019. The FAS explains that the group was awarded a one-year charter agreement and the vessel will be deployed by the Government of Trinidad & Tobago on the domestic route connecting the main island of Trinidad to the sister island of Tobago.

On the other end of the ranking table, there are five companies that are estimated to have an interest coverage ratio of below two times, namely Grand Harbour Marina plc, DIZZ Finance plc, Central Business Centres plc, ENDO Finance plc and Von Der Heyden Group Finance plc. Investors need to closely monitor the future performances of these companies to gauge whether any improvements are expected in the foreseeable future to ensure a more robust performance in order to sustain their debt obligations.

Although several knowledgeable investors are regularly airing their concerns on the state of the local bond market mainly due to some of the new entrants issuing bonds, it is important to compare the profile and financial strength of the new issuers to the companies ranking in the top positions across various metrics.

As the figures presented today indicate, a number of companies possess very strong credit metrics which should alleviate the concerns on the overall health of the bond market. Investors should use these financial indicators to ensure they position their portfolios towards the stronger companies as opposed to the weaker companies that may need to resort to support from shareholders should their financial performance weaken any further.

In next week’s article, the net debt to Ebitda multiple will be published. This is another very important metric for investors to take into consideration. The combination of the results of both rankings should provide sufficient information on the overall strength of bond issuers.

Rizzo, Farrugia & Co. (Stockbrokers) Ltd, ‘Rizzo Farrugia’, is a member of the Malta Stock Exchange and licensed by the Malta Financial Services Authority. This report has been prepared in accordance with legal requirements. It has not been disclosed to the company/s herein mentioned before its publication. It is based on public information only and is published solely for informational purposes and is not to be construed as a solicitation or an offer to buy or sell any securities or related financial instruments. The author and other relevant persons may not trade in the securities to which this report relates (other than executing unsolicited client orders) until such time as the recipients of this report have had a reasonable opportunity to act thereon. Rizzo Farrugia, its directors, the author of this report, other employees or Rizzo Farrugia on behalf of its clients, have holdings in the securities herein mentioned and may at any time make purchases and/or sales in them as principal or agent, and may also have other business relationships with the company/s. Stock markets are volatile and subject to fluctuations which cannot be reasonably foreseen. Past performance is not necessarily indicative of future results. Neither Rizzo Farrugia, nor any of its directors or employees accept any liability for any loss or damage arising out of the use of all or any part thereof and no representation or warranty is provided in respect of the reliability of the information contained in this report.