Bank of Valletta has offered voluntary redundancy to members of staff, signalling its intention to cut costs, but a spokesman insisted the organisation was "not shedding staff".

Three different voluntary redundancy schemes have been proposed to employees, targeting mainly those over 50 with more than 20 years of service. The schemes offer early retirement against the payment of salaries and terminal benefits, depending on the number of years of service of the applicant.

One of the schemes proposes giving employees with 30 years of service the sum equivalent to three years terminal salary which will be paid upon attaining the age of 58.

BOV’s move comes only days after the announcement of fresh plans by its main banking rival, HSBC, to close a number of branches around the island and reduce its staff levels, also through early retirement schemes.

Sources at BOV said it had not yet discussed with unions the number of employees it aims to shed. However, informally it has made plans to remove from its books between 200 and 300 which, according to the sources, “it could easily do without”.

A bank spokesman said BOV has always had retirement schemes in place, and these schemes are simply a renewal of past schemes, "with more flexibility factored in".

"Our aim is simply to continue offering such schemes to ensure the bank is resourced with the skills it requires in the current situation. We will not be declaring any redundancies. Indeed, we are recruiting staff as we speak, and will continue to recruit more."

The bank said it had committed itself with the union, during collective agreement negotiations earlier this year, to renew its retirement schemes, in response to requests made by members of staff.

"The bank has now delivered on its promises. These schemes have always been, and will remain, voluntary."

According to the last published accounts, in 2018 BOV had 1,702 employees on its books, costing the bank over €65.5 million in wages, social security contributions and other employment-related costs. Of these, 578 were categorised as being at managerial levels, where the higher salaries are paid.

Writing in Times of Malta last Thursday, BOV CEO Mario Mallia did not mention the need to cut overheads but said the bank was to become a “smaller but more robust, lower risk and stable institution”.

The spokesman clarified the CEO was not speaking in terms of lower staff numbers, but in terms of the exiting of businesses and customer relationships.

"This should have been obvious from the context he was speaking in, of de-risking the bank." 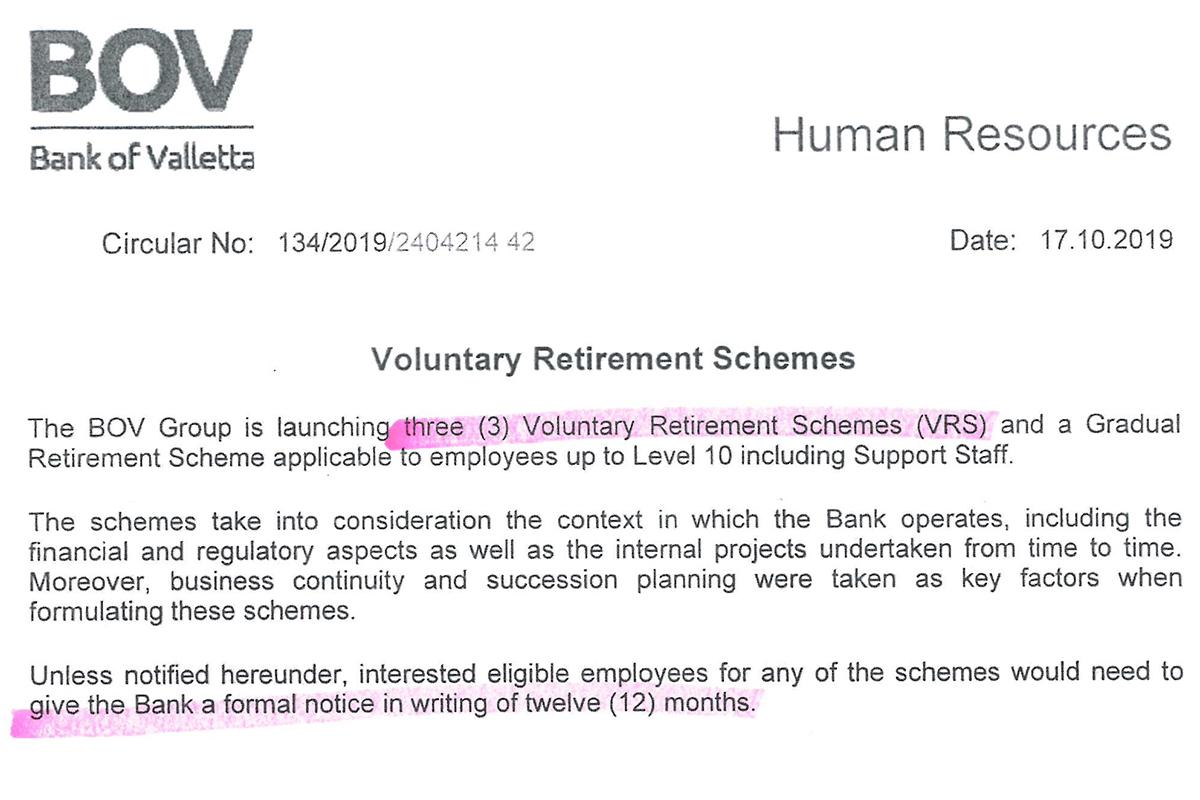 Part of the circular relayed to employees.

Mr Mallia, who will be retiring shortly, will be replaced by a foreign CEO, a first for Malta’s largest bank.

BOV is in the process of implementing a ‘de-risking’ strategy, after various operational risks and deficiencies were identified by the European Central Bank and the European Banking Authority.

This entails ending relationships with clients deemed not to comply with the bank’s new risk appetite.

Many companies in the financial services and gaming industries have been given notice of account closure. The bank is also facing a revision of correspondence banking facilities afforded by international institutions.

HSBC had years ago divested itself of high-risk customers from the online gaming and financial service industries.

That left BOV as the only large local bank still serving this lucrative sector of the Maltese economy.

It remains to be seen whether its de-risking plans will affect the industry, one of the biggest drivers of the economy and Malta’s growing expatriate workforce.

While the government does not have majority shareholding, after public share flotations by previous PN administrations, it retains the right to appoint the chairman and most of its directors.

Over the years, under both PN and Labour administrations, it has come under criticism for political decisions related to staff recruitment.

BOV said that in terms of its Memorandum and Articles, the government appoints two directors, one of which is the chairman, two directors are executives who are appointed ex-officio, namely the CEO and the Chief Risk Officer.  A further two directors may be co opted by the board in consideration of their expertise. The rest of directors are appointed during the annual general meeting. All must be approved by local and international regulators.