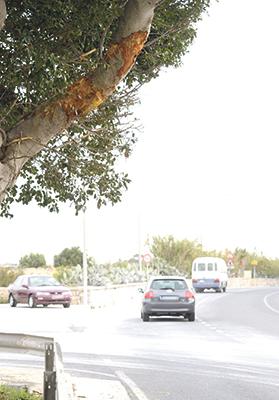 Double-decker bus drivers and tour operators have long been worried about low-hanging tree branches and electricity cables, saying that avoiding them can feel like “driving an obstacle course”.

“This is something that will be on your mind when you are driving. You think: God forbid I am not keeping a sharp lookout and a branch hits someone or something,” one driver said.

One operator said a few years ago they had expressed their concerns to the authorities with regard to electricity cables handing from buildings.

“You can have a cable that is dislodged from its position and then hangs low from a building. Our buses are four metres high, just like a trailer. We have had incidents where trailers and even tourist buses pulled live electricity cables along with them. It can be extremely dangerous,” the operator said.

Asked whether any guidelines existed on how to navigate trees and other hazards on the road, operators said that when double-decker buses had been introduced to the island, some sort of guidelines had been drafted by the authorities.

“But when the buses changed and the companies brought in newer ones, most of these guidelines no longer remained applicable,” they said.

At least one company said it organised internal training that included estimating the height and distance of obstacles on the road.

An operator said that, every day, about a dozen double-decker buses went through the road where Monday’s accident happened.

“We all know there are trees there but when we keep a safe distance it is always fine,” a driver said, acknowledging that bad weather could result in especially low-hanging tree branches.

Coach drivers said it was time the authorities took stock of trees on the roads and took pruning seriously.

Asked about liability in accidents like this, the operator said “that is what insurance is for”.

He said companies like his paid millions of euros in insurance coverage to make sure they were covered when such mishaps occurred.

Did the driver’s young age, 24, make any difference? Young age did not worry operators. “You can have a 50-year-old driver making a mistake or losing his concentration. Believe me, age has nothing to do with it,” the operator said.