A motley alliance of Israeli parties on Sunday ousted Benjamin Netanyahu, the country's longest-serving prime minister, and formed a new government in a seismic shift in the country's turbulent politics.

Naftali Bennett, a right-wing Jewish nationalist and former tech millionaire, was to take over at the helm of the eight-party bloc, united only by their shared disdain for the hawkish right-wing leader known as Bibi.

Netanyahu, 71, in typically combative style, vowed shortly before his defeat that "if it's our destiny to be in the opposition, we'll do so with our heads high until we take down this bad government and return to lead the country our way".

Beloved as "King Bibi" by his right-wing supporters and condemned as the "crime minister" by his critics, Netanyahu has long been the dominant, and increasingly divisive, figure in Israeli politics.

But on Sunday, a vote in the Knesset legislature following weeks of intense political drama ended his government with a razor-thin majority of 60 to 59 in the 120-seat chamber.

In Tel Aviv's Rabin Square, Netanyahu's opponents broke out in cheers and launched into an evening of joyous celebrations, having rallied in recent days with "Bye bye Bibi" placards. 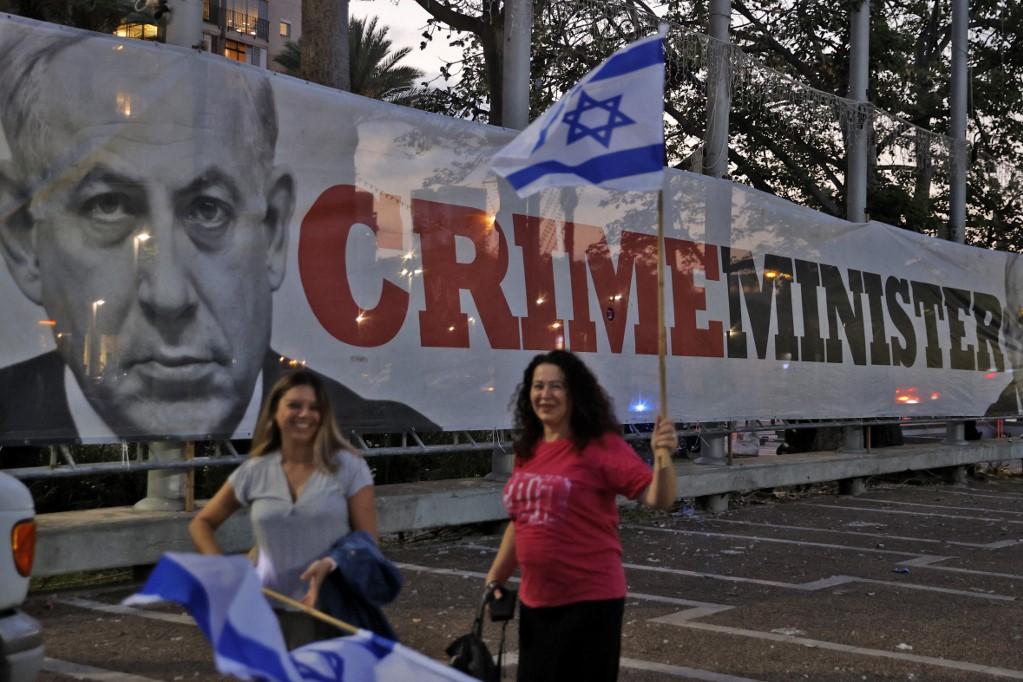 Israeli women carry national flags as they walk past a banner against Prime Minister Benjamin Netanyahu in the central coastal city of Tel Aviv. Photo: AFP

One of the demonstrators, Tal Surkis, 19, confessed to "mixed feelings" about the incoming change coalition, but said "it's something Israel needs".

Bennett, 49, in a Knesset speech before the vote, promised the new government, a coalition of ideologically divergent parties, "represents all of Israel".

He said the country, after four inconclusive elections in under two years, had been thrown "into a maelstrom of hatred and in-fighting". 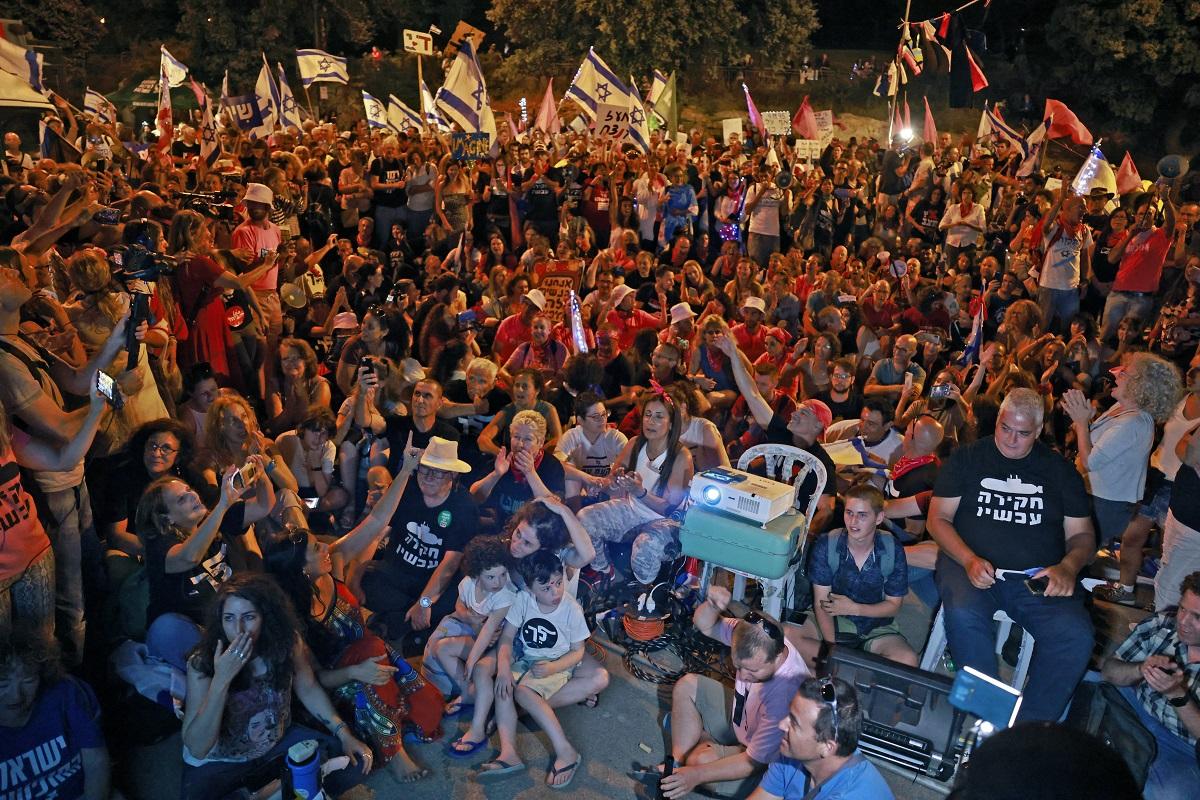 Israeli demonstrators rally in support of a new coalition government in front of the Knesset in Jerusalem during a parliamentary vote. Photo: AFP

"The time has come for different leaders, from all parts of the population, to stop, to stop this madness", he said, to angry shouts of "liar" and "criminal" from right-wing opponents.

Netanyahu, who is battling corruption charges in an ongoing trial he dismisses as a conspiracy, has been the dominant Israeli politician of his generation, having also served a previous three-year term in the 1990s.

His supporters have hailed him as a strong defender of Israel who has been tough on arch foe Iran, but also struck a series of historic normalisation deals with several Arab nations last year.

Being ousted from the top job will leave Netanyahu more exposed to his legal woes, because it denies him the chance to push through parliament changes to basic laws that could give him immunity.

The change coalition met before the vote was taken. Video: AFP

Netanyahu, true to his reputation as Israel's "Mr Security", charged that "Iran is celebrating" the launch of what he charged would be a "dangerous" and weak left-wing government.

The diverse anti-Netanyahu bloc was cobbled together by the secular centrist Yair Lapid, a former TV presenter. 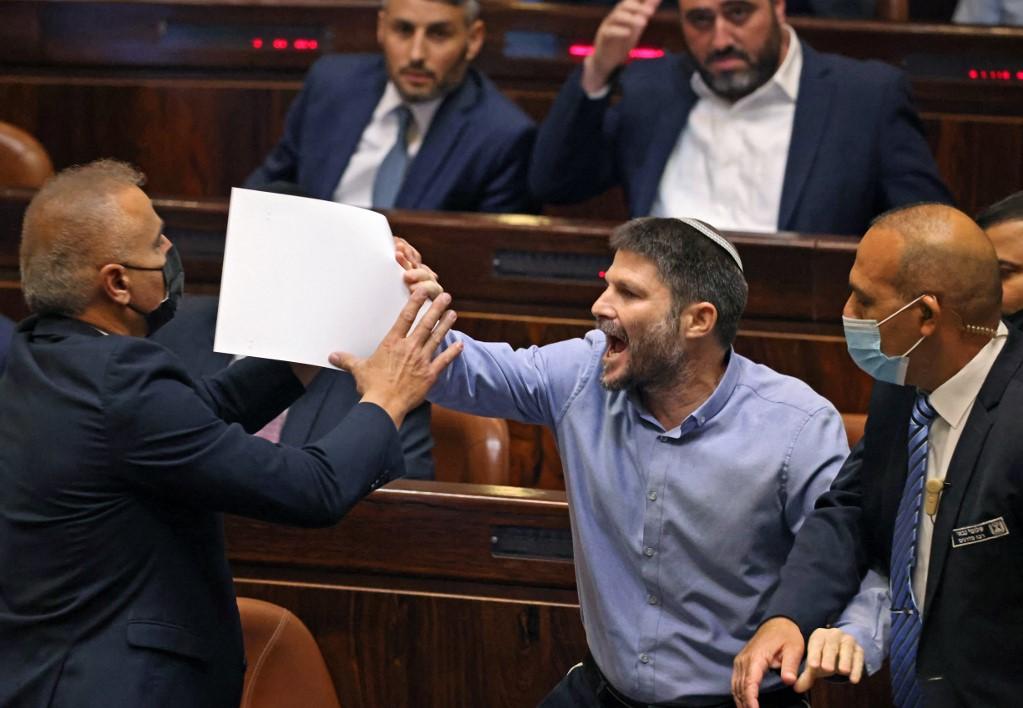 It spans the political spectrum, including three right-wing, two centrist and two left-wing parties, along with an Arab Islamic conservative party.

Lapid, 57, is to serve as foreign minister for the next two years before taking over from Bennett.

The improbable alliance emerged weeks after an 11-day war between Israel and Hamas, the Islamist group that rules the Palestinian enclave of Gaza, and following inter-communal violence in Israeli cities with significant Arab populations.

Netanyahu, who long ago earned a reputation as Israel's ultimate political survivor, in his final days in office tried to peel off defectors, hoping to deprive the nascent coalition of its wafer-thin legislative majority, to no avail.

He accused Bennett of "fraud" for siding with rivals, and angry rallies by the premier's Likud party supporters resulted in security being bolstered for some lawmakers.

Netanyahu's opponents accused him and his allies of stoking tensions in a "scorched-earth" campaign.

Netanyahu's bombastic remarks as he saw his grip on power slip drew parallels at home and abroad to former US president Donald Trump, who described his election loss last year as the result of a rigged vote.

Sunday's vote came at a time of heightened tensions in the Israel-Palestinian conflict, which has grown more bitter in the Netanyahu years, in part due to the expansion of settlements considered illegal under international law in the occupied West Bank.

Meanwhile, right-wing anger has grown in Israel over last week's postponement of a controversial Jewish nationalist march through flashpoint areas of east Jerusalem.

The "March of the Flags" is now slated for Tuesday, and the agitation surrounding it could represent a key initial test for a new coalition government.

Gaza's rulers Hamas said that the political developments in Jerusalem wouldn't change its relationship with Israel.

"The form the Israeli government takes doesn't change the nature of our relationship," said the group's spokesman Fawzi Barhoum.

"It's still a colonising and occupying power that we must resist."