The Sta Luċija tunnels project has reached a breakthrough, with Infrastructure Malta workers having broken through the last metres of rock to link both ends.

Rather than being bored, the 90-metre tunnel is being cut from the surface and will then be roofed

It will run under the Santa Luċija roundabout linking Addolorata Hill with Tal-Barrani Road and easing the flow of traffic from the new Marsa junction towards the southern part of the island.

The old roundabout above the tunnel will be rebuilt to a new design that will facilitate access to Santa Luċija, Paola and Tarxien

Most work on the excavation and formation of 130-metre approach ramps to the tunnels on either side of the roundabout has been completed.

398 precast reinforced concrete panels are being used to form the tunnel walls. 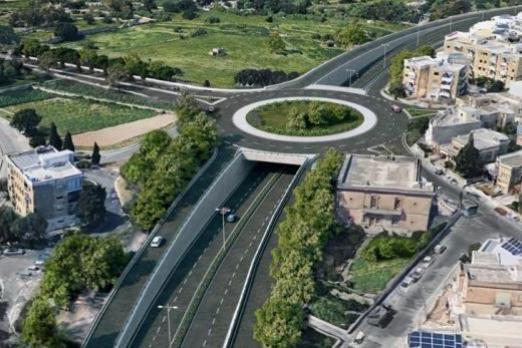 An impression of how the Sta Lucija tunnel will look.