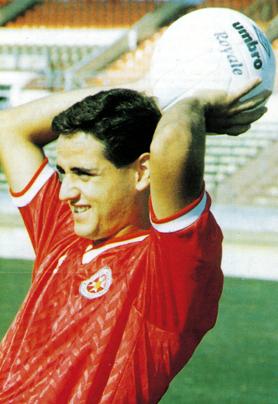 In 1987 Ħamrun Spartans introduced a young footballer in their championship-winning team.

This in itself was nothing exceptional. Promoting new talent is part and parcel of football, but this lad had something special about him. The way he stamped his authority on the team made everyone stand up and take notice.

His name was Joe Brincat or, as he was affectionately known by his admirers, It-Tivoli.

Brincat started playing football as an eight-year-old with the Ħamrun Catholic Action team. Beneath his small frame, however, was hidden a store of football talent.

From the Catholic Action team he moved to the Spartans’ nursery where as a ten year-old he won his first international honour when he played for Malta’s U-12s in a tournament in Geneva.

By the time he reached adulthood he had already been capped 10 times by Malta Under-21 and eight times by the national Under-18 team.

In 1987-88 Brincat made his debut for Ħamrun against Sliema Wanderers as a defending midfielder.

He was hailed as the ‘Wonder Boy of Maltese football’ by sports journalists who fell over each other to find superlatives to describe the new Spartans protégée.

Despite his youth he showed an unusual ability to adapt himself to any role in the team.

Brincat first showed his versatility when George Xuereb left and was asked to fill the void left by the veteran defender. He did so well in this position that by the end of the season he was being hailed as one of the best liberos in the league.

During that period the national team was well served in that role by John Buttigieg. So, when Brincat was called to the squad he was deployed in midfield.

He was tried in that role for the U-21s in Messina where Brincat was voted as the best player of the tournament.

After making his debut for the Spartans, Brincat’s career shot forward like a bullet.

Brincat’s stay with Ħamrun coincided with a great period in the club’s history.

By 1995, however, the Spartans’ domination of the game in Malta was over. The club’s financial position deteriorated to such an extent that they were forced to part with their biggest asset in an attempt to improve the situation.

Brincat moved to Floriana FC but his transfer only brought disappointment to the player. Injuries forced him to miss several games and after three uneventful seasons he only had a Super Five tournament medal to show for his efforts.

In 1997-98, by mutual consent, Brincat and Floriana decided to part company.

He joined Birkirkara FC who, at the time, were still seeking their first major honour.

In 2002-03 Brincat signed for Sliema Wanderers with whom he won three consecutive league championships.

Although now he was already 34 years old, an age when many footballers would be thinking of retiring, Brincat was still at the top of his form and it seemed that he would still be around for a few more years to come.

Brincat’s career has been one strewn with successes.

An excellent player and great sportsmen, he was above all a professional throughout. He was also a perfect example of the modern Maltese professional footballer.

His 103 international caps for Malta and his impressive list of honours speak volumes on the ability of this exceptional footballer.