When British comedian Johnny Vegas bought an old Maltese bus online after having a few drinks, he was not prepared for the saga of shipping the bus from Malta to the UK.

Vegas is a British comedian, actor and writer, and is best known for his stand-ups, angry comedic rants and surreal humour on stage.

“The sports car thing is a bit ‘done’, isn’t it? So I bought a knackered old bus and converted it for glamping,” the 50 year old comedian told Radio Times, a British weekly magazine.

'Glamping', an amalgamation of 'glamour' and 'camping', describes a form of amenity-rich camping that seeks to replicate many home comforts.

After one too many pints, Vegas stumbled across an old traditional yellow Maltese bus being sold on online auction site Ebay. He decided to bid for the bus, little knowing that buying the bus would also include him buying a flight ticket to Malta.

“Johnny always loved the look of the Maltese buses, so when he saw one on Ebay back in 2019, he decided to bid for it,” Vegas’s assistant Beverley Dixon told Times of Malta.

“He purchased it from an Australian couple who owned a B&B in Malta. They kept the bus in storage for two years, and before emigrating back to Australia, decided to sell it.”

Whilst the traditional yellow bus has not been in use for public transport for almost 10 years, it is still an important icon of Maltese heritage. Best known for their customisation and eye for detail, such buses are now used for operating special heritage services or for tourists.

The voyage of an old Maltese bus

Dixon said that transporting the bus to the UK was a great hassle.

“We arrived in March 2019, and had booked the bus on a ferry from Malta to Catania, and had a low loader coming from the UK to pick it up,” she said.

At the same time, the UK was hit by a storm and the low loader could not leave the harbour. Apart from that, after the bus was towed to Maltese docks, the engine would not start, and could not get on the ferry.

“We arranged to have it taken off and get a starter motor fitted, and then it was booked on a crossing from Malta-Salerno-UK. Once it arrived at Salerno, it did not start again!”

She said that the bus then had to be put on a trailer, and placed on another boat from Salerno to the UK.

But that was not the end of their problems.

“We tracked the boat, and noticed that it stopped in Spain,” she said. “Shortly afterwards, a news report flashed up that the ship was on fire, and the crew had to be airlifted to safety and the boat towed in by a salvage company.”

The bus was then unloaded in Spain until an insurance company had sorted insurance and compensation issues, and was then once again placed on a boat, back to Italy.

“Loaded again once more, it finally arrived in the UK in August 2019! It was a wreck when it arrived, and needed far more work than Johnny envisaged.”

Vegas’ quest to refurbish the old bus as a glamour accommodation caught the attention of a British TV production team, who decided to follow his two-year journey of fixing the bus.

His saga is all documented in ‘Johnny Vegas: Carry on Glamping”, which will air on Wednesday, May 5 at 10pm in the UK on Channel 4. 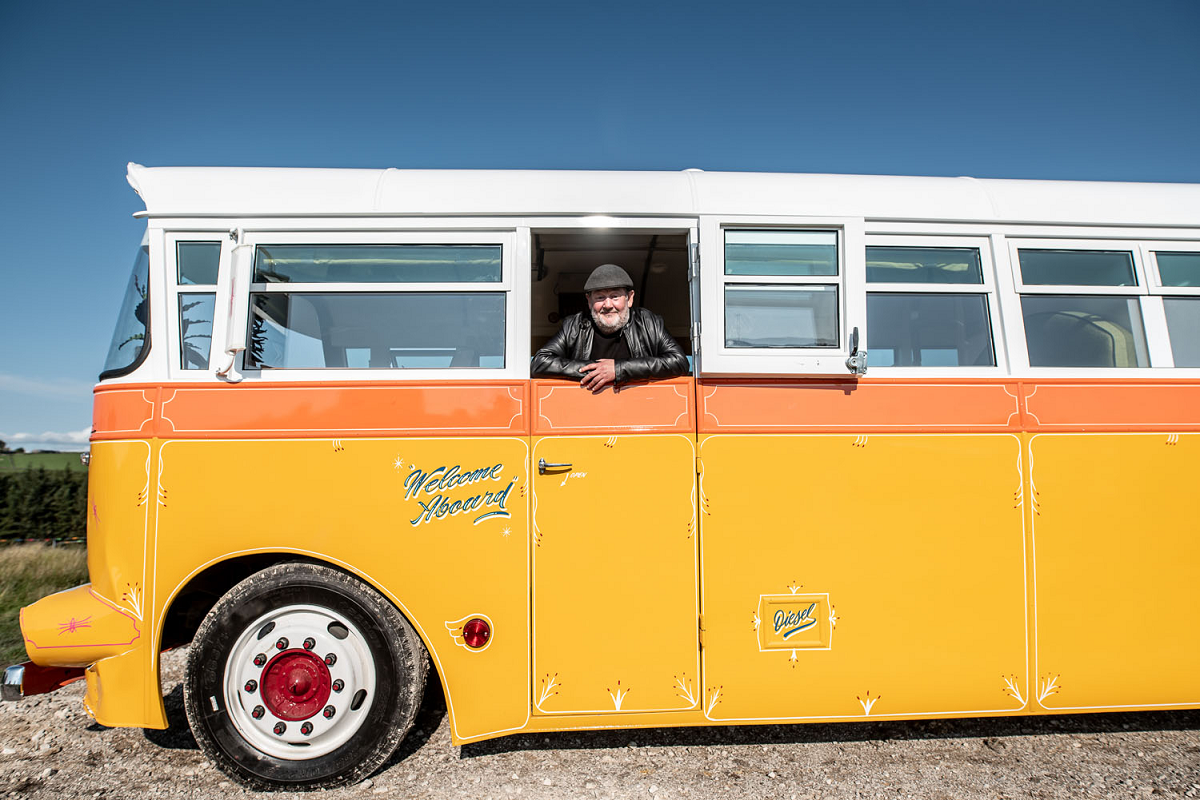 Restorations on the bus are now complete, and the bus, named ‘Patricia’ can be found on a Glampsite, ‘Field of Dreams’ in North Yorkshire.

On Twitter post, Vegas said that the bus is named after his mother, Patricia, who had passed away before seeing the finishing touches of the project.

“As a stand-up you make your own work, but I’ve been sleepwalking, waiting for it to come in. And that’s why the glampsite became so important. It was something proactive,” Vegas told Radio Times.

‘Patricia’ can sleep six people comfortably and has all the necessities needed to make their stay extra comfortable.

The ‘unique’ shower has tiles that were hand made by Vegas himself, and the original chairs of the bus have been restored to create outdoor benches, perfect to enjoy a cold drink outside in the fields.

It seems that Patricia has made a hit for those interested in ‘glamping’, as the Maltese bus is already fully booked for the rest of the year.

Correction April 28: Amended to correct date of Channel 4 show to May 5.