“Destiny always seems to carry an unknown plan that continuously eludes us.”

Those words by Damian Ebejer appear to reflect the process of his art, some of which has gone on display in his 17th solo exhibition – called When Destiny Lingers – until the end of this month. 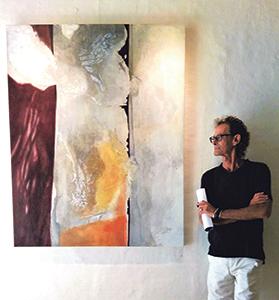 “My art is my life. It never leaves me.” Works from Damian Ebejer’s exhibition at Palazzo de Piro in Mdina.

The highly introspective artist often wonders about the true meaning behind the creation of his works but, he says, the answer normally eludes him.

“In some of the paintings the reason behind the first brush strokes is as mysterious as the universe,” he says. “I have no idea to what end result I will be working. Destiny is unknown and this pushes me to create what is equally unknown to me.”

With the latest personal exhibition he has gone into facets of his art that have no fixed theme. The paintings, chosen from works produced between 2016 and 2019, portray what he says is an approach of chance. And they explore some of the more important elements of his thoughts and emotions.

“They offer the viewer a glimpse of some of my visions that surface to the physical world through my art.”

He describes his greatest challenge as remaining faithful to his art. “If what I am working on means something to me then that is when satisfaction comes. I am not really satisfied with whatever I create. Throughout my artistic career my approach has always been changing and evolving. If I start feeling too comfortable with what I do, then I get worried.”

He describes his challenge now as being different to what it used to be a decade or two ago. “Before, my work might have been relatively more straightforward and physical or real, and portraying the essence of what captured my eye. Today, I sometimes feel I explore simpler emotions, which in turn are deeper and eventually harder to express.”

He describes this exhibition as being about finding the abstract in life, both the seen and the unseen. At a glance, each work has little to do with the next but the artist believes that, subconsciously at least, there must be some form of link.

The mediums too are a mix, including black ink, a work on gunny sack cloth and the others in oils, natural lime, pastel and acrylic.

“So basically, one of the more important aspects was preserving the honesty in my art and most importantly, retaining my individual style. The most gratifying thing I have been told on several occasions is that my work was recognised at first glance.

“I am what I create. I am not terribly interested in portraying the reality I see outside myself. I search for a collective beauty, entangled with the ugly and chaotic, in order to compose a subconscious recognition of fascinating order.”

Ebejer’s first public solo exhibition took place in 1994 when he was already 33 years old. Naturally, he was an unknown and he did not find entering the Maltese art scene easy as a late starter. But maybe, he reflects, it made him work even harder. 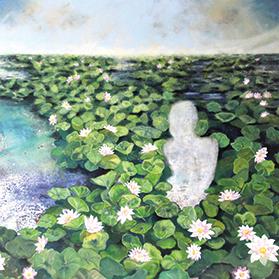 Besides his personal exhibitions he has often created murals and ceiling paintings. These normally require an approach that is different to studio work. Besides being physically taxing, especially the ceiling paintings, the actual method of concentration is totally different, he finds.

He terms these differences as the outer focus vs the inner focus. The outer focus is used on the mural works, which he sees as a form of self-discipline – it keeps him in line with the basics of painting. He also finds, however, that it can generate inspirational emotions for his more personal work.

Ebejer is also a writer. He recently started editing several of his poems with the intention of publishing another book of poetry. He has found work he started some time ago and he intends to make it his next project for this year, besides other work he is planning.

“In a nutshell, that is why my art is my life. It never leaves me. Each work or project I do serves as a springboard for the next. It’s like a continuous exploration of what I am and what I would wish to do.

“It might be considered that as time moves on working gets easier. This is not really the case. I sometimes feel that the creative process becomes harder. Maybe it’s because I became more critical of what I do. Who knows?

“One thing that is certain is the satisfaction that a finished work leaves in my heart.”

The exhibition is open at Palazzo de Piro in Mdina every day until February 28. Entrance is free and the artist will be in attendance to meet visitors every day between 10am and 2pm. He may be contacted on 9980 1721, damianart@onvol.net or damianebejer621@gmail.com.