Migrants who are unlikely to be granted asylum should have their application processed within 12 weeks, the European Union is proposing in a new policy document about migration and asylum.

The new pact, unveiled on Wednesday in Brussels, would also see member states who do not want to receive migrants themselves help other EU states to return them to their country of origin.

The plan is a cornerstone in an EU effort to rally sceptical member states around a plan to better share responsibility for settling refugees and sending rejected asylum seekers home.

And if a country is subject to migratory "pressure", and believes that it cannot take care of migrants, it can request the activation of a "compulsory solidarity mechanism" by the Commission.

All states will then be called upon to contribute, according to their economic weight and population, but they will have the choice between receiving asylum seekers, "sponsoring" the return of a migrant who does not have the right to stay or helping to build reception centres.

While this will make it easier for migrants to return voluntarily, it also sends a message that the EU is ready to welcome those who need international protection or have a legal right to stay, Johansson said.

Malta and other EU border countries have repeatedly complained about a lack of solidarity by other member states. Foreign Affairs Minister Evarist Bartolo said earlier this month that just eight per cent of asylum seekers processed by Malta in the past 15 years had been officially relocated to other member states.

@EU_Commission New #Migration Pact good basis to restart #migration discussion. #cooperation with #neighbours preventing flows, fight criminal #human smugglers is welcome. Returning those with no right to asylum is crucial. Agree that #solidarity must not be optional - RA

On Wednesday, just as the EU was unveiling its new plan, France's ambassador to Malta Brigitte Curmi announced that a group of Malta-based asylum seekers were on their way to France as part of a relocation deal.

"An important gesture by France to show its effective solidarity," the ambassador tweeted.

Member states often find it hard to return failed asylum seekers to their homelands and the von der Leyen-led EU Commission has said it wants to help member states better manage such returns.

Earlier this month, Times of Malta published footage of a group of men who have spent months at the Safi detention centre and are begging to be allowed to return home, as they remain in cramped conditions and with no update on their asylum claims.

Meanwhile, the EU commission is also proposing a five-day limit on documenting and screening irregular migrants. Currently the only requirement is to take fingerprints and register the asylum seekers, but the new procedure will see all arrivals being subjected to thorough health and security checks.

If an EU country fails to return migrants to their country of origin within eight months, it must take them in

Last year 2.4 migrants received a residence permit in the EU, whether through marriage, employment, studying or seeking asylum, but another million left the bloc.

At the same time the EU saw 140,000 irregular arrivals, a third of whom were granted protection. She compared this to the 1.8 million arrivals in 2015, almost all of whom were refugees. 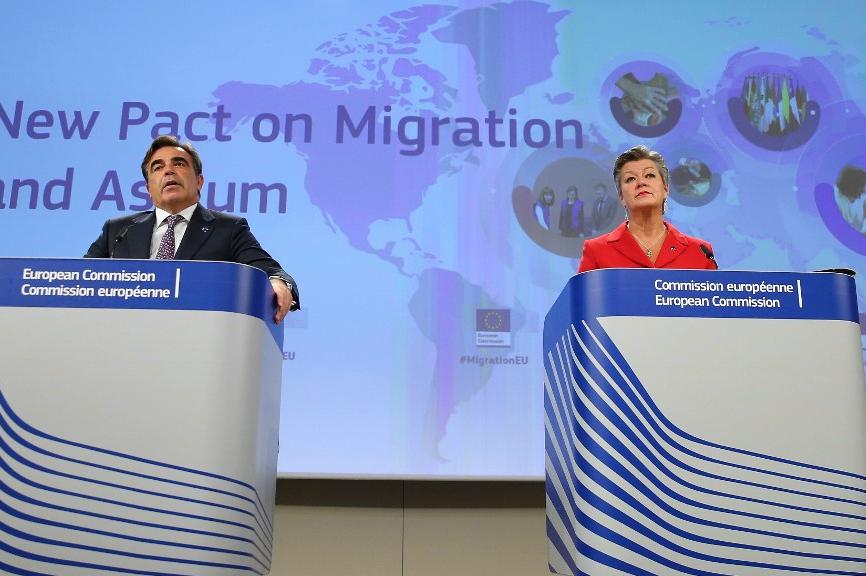 Johansson said that Europe needed fewer irregular, but more regular migrants and one way to do this was to fight well organised criminal networks smuggling people into the EU. The EU also needed to focus more on returns through readmission agreements with third countries.

An end to Dublin II?

Commission Vice-President Margaritis Schinas, who addressed the press together with Johansson explained that the country of first entry will not remain the only solution.

“The pact will ensure permanent and effective solidarity. States can ask for solidarity within three scenarios: in search-and-rescue cases, crisis situations or when they are risking pressure.

“The commission,” he said, “would then step in and organise solidarity depending on the specific situation”.

In the event of a crisis similar to that in 2015 -- when more than a million refugees arrived, compared to only 140,000 per year now -- the choice for a state is reduced to taking charge of the relocation of refugees or the return of rejected migrants.

But if an EU country fails to return migrants to their country of origin within eight months, it must take them in -- an idea that a European source admitted would be hard for smaller countries to accept. 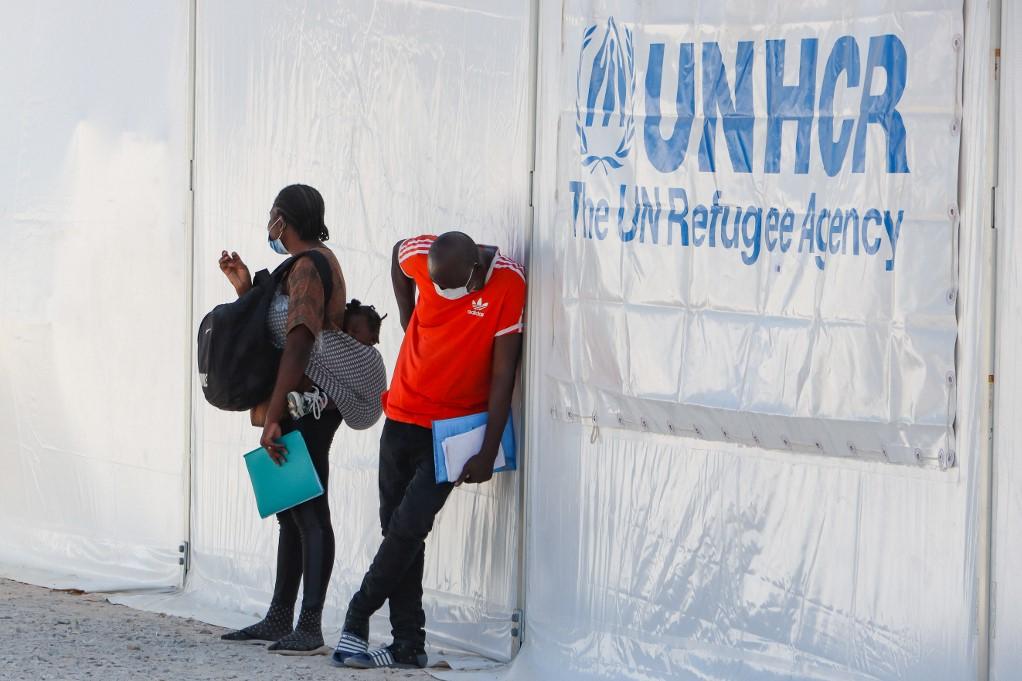 Migrants wait outside a new refugee camp in Kara Tepe - Mavrovouni on the island of Lesbos in Greece. Photo: AFP

The Dublin Regulation states that asylum claims must be processed by the migrant's country of arrival, a rule that has led to bitter squabbles between the southern coastal member states where seaborne migrants arrive, and wealthier northern countries where most prefer to head.

In the Commission's proposal, the country responsible for the application could be the nation in which a migrant has a brother or sister or in which he or she has worked or studied. Any country that issued a visa to a migrant will have to take care of any asylum application.

Otherwise, however, the country of arrival is still responsible.

Observers said the plan as unveiled maintains more or less the same principle as Dublin, with some flexibility.

PN MEP Roberta Metsola cautiously welcomed the new proposals saying that they “contain a number of important elements that we have long called for”.

“The proposals will mean that the Dublin Regulation that has caused so much disproportionate pressure on frontline Member States, like Malta, Italy or Greece will finally be withdrawn and replaced by solidarity measures," Metsola said.

The pact seeks to end periodic standoffs between member states and NGO rescue vessels at sea by pledging relocation following disembarkation. This, the EU says, should help avoid the need for ad hoc solutions.

Meanwhile, Frontex should also provide increased operational and technical support as well as deployment of maritime assets to member states.

In its document, the commission notes that cooperation and coordination among member states needs to be “significantly stepped up, particularly in view of the search-and-rescue activities” that developed over the past few years and regularly involve NGOs.

The plan however stops short of setting compulsory quotas for resettlement and disappointed migrants' rights activists and refugee agencies, who had hoped for quotas and an end to a "Fortress Europe" ringed by squalid refugee camps.

"It's a compromise between xenophobia and cowardice," tweeted professor of environmental geopolitics Francois Gemenne.

But the plan is likely, nevertheless, to face a rough reception in national capitals, many of which are keen to see the EU take ownership of the problem, without wanting to take charge of large numbers of refugees on their own soil.

"It won't work like this," Austrian Chancellor Sebastian Kurz told AFP this week, rejecting the idea of mandatory quotas for refugees for all EU countries.

Poland, Hungary, the Czech Republic and Slovakia also oppose compulsory relocation, and torpedoed such plans after the 2015 migration crisis.

It is now up to the European Parliament and Council to examine and adopt the full set of legislation necessary to make this common EU asylum and migration policy a reality.

Given the urgency of local situations in several states, the commission is urging co-legislators to reach political agreement on the core principles of the Asylum and Migration Management Regulation and to adopt the Regulation on the EU Asylum Agency as well as the Regulation on Eurodac by the end of the year.

The revised Reception Conditions Directive, Qualification Regulation and recast Return Directive should also be adopted quickly, building on the progress.

What is the pact proposing?

Return sponsorship, where a member state takes over responsibility for returning a person with no right to stay on behalf of another state.