From magnetic hammers to light sabres, children are being invited to participate in the third edition of the Superheroes in Science Project where they can win many prizes for their creative ideas and scientific research.

The Superheroes in Science Project’s aim is to promote science among students between the ages of seven and 14 through the universe of superheroes and that of Star Wars.

This year’s edition is bringing together students from different schools and NGOs to share their creative ideas and their love for science and fiction.

Applications are now open. Teachers, parents and NGO leaders are encouraged to sign up with their children or students, from year three  to year eight years old, to participate in this contest.  Their science project can take the form of an artwork to explain the science behind superheroes, Star Wars’ futuristic gadgets, vehicles and fictional planets. Projects might be in the form of an experiment, a model or a visual presentation such as a comic-book-style information chart, accompanied by an online project report.

Students have the opportunity to create a project and link their scientific knowledge of, for example, animals, insects and plants, to the world of superheroes, supervillains or Star Wars. They can create their very own science-fiction hero.

One can participate individually or in groups of two, maximum three students. Each individual or team can be from a school or an NGO such as Scouts, Girl Guides or other kinds of clubs.  Students’ or parents’ registration is free. The projects should be submitted online through photos and videos on the website superheroscience.info. Many ideas for projects are available in the FAQ section of the website.

The deadline for the submission of projects is August 30 at 11pm. More information related to the 2020 project, including guidelines for teachers and parents, is available on the aforementioned website. 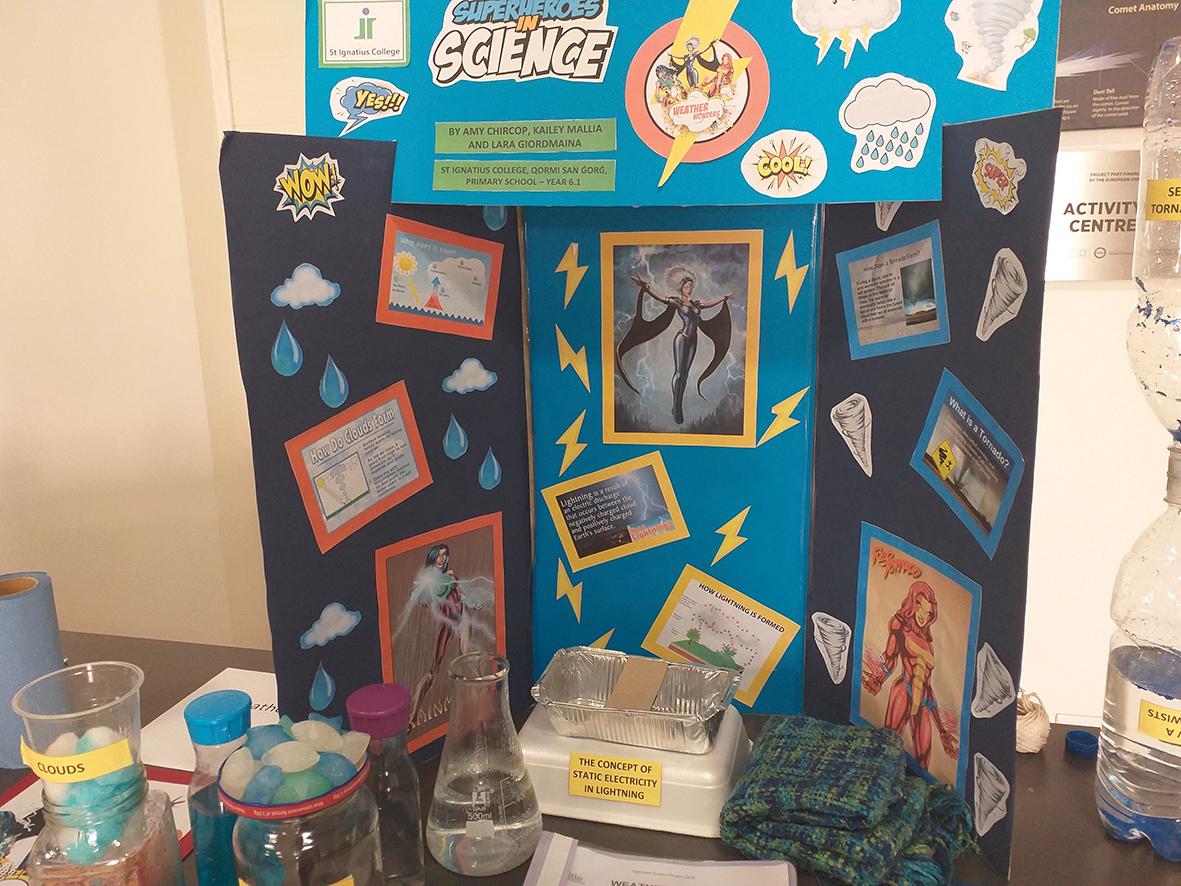 Weather Wonders was a winning project submitted by Amy Chircop, Kailey Mallia and Lara Giordmaina from St Ignatius College, Qormi San Ġorġ Primary School. These three girls impressed with their well-presented project and even turned up in customised t-shirts and cue cards.

Equipped with a glass jar, warm water, ice cubes and an aerosol spray, the students created clouds as warm water condensed on ice cubes, forming clouds and demonstrating the water cycle in a simple manner. This was compared to  X-Woman Storm’s ability to control weather.

The students also showed the effects of the precipitation of rain using coloured water and cotton balls, in contrast with Sarah Rainmaker’s powers; and finally formed the vortex that powers tornadoes using plastic bottles, water and glitter. This was a clever demonstration to emulate the powers of Red Tornado who creates vortices with her bare hands. 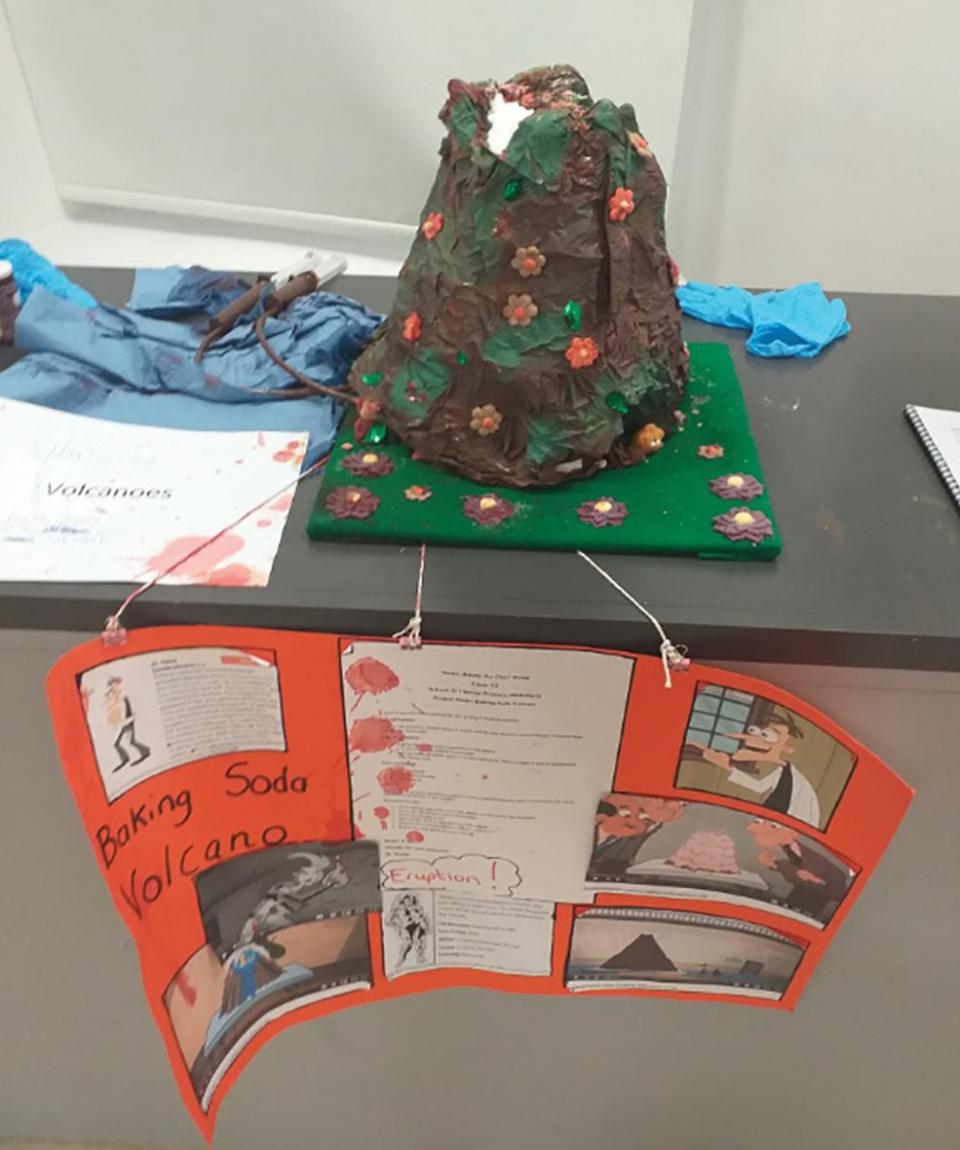 Jimmy Jay Chev Welsh was the winner from St Theresa College, Birkirkara Primary. His project, Baking Soda Volcano, simulated a volcanic lava flow and was inspired by D.C Comics’ Volcana, one of Superman’s villains. Jimmy Jay created an impressive volcano model and explained the perils and pitfalls of a volcanic eruption.

For his experiment, he utilised the chemical reaction of coloured vinegar injected into baking soda. This produced a coloured froth-like effect, emulating lava flowing out of a volcano model that would not be out of place in a Jurassic World setting.

His volcano came alive when he demonstrated it to the delight of all those present, showing how exciting superhero science experiments can be. 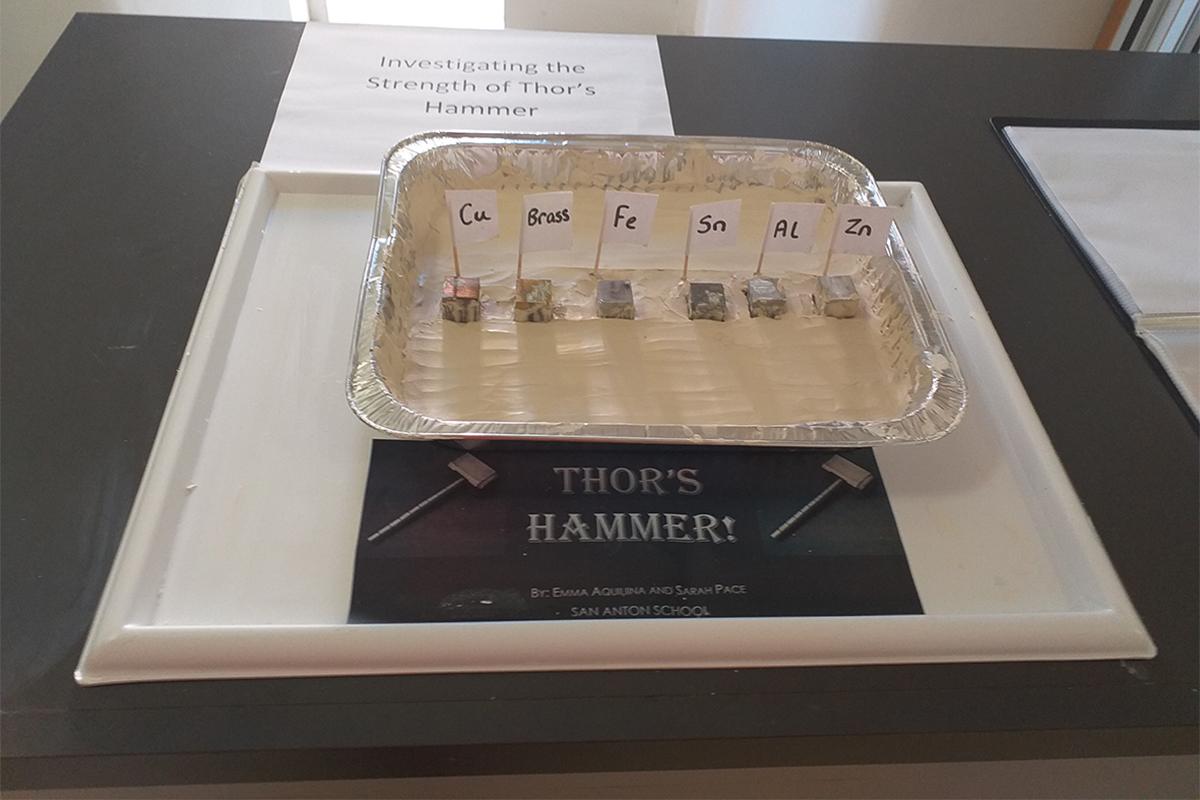 Investigating the Strength of Thor’s Hammer

Sarah Pace and Emma Aquilina from San Anton School created a science project entitled Investigating the Strength of Thor’s Hammer. The winning project was a very original idea: an experiment to find which metal would be most suitable for Thor’s famous hammer.

Using the physics formulae to find density, the students measured the impression left by different metals in a base of clay to determine the deepest imprint and, hence, the densest metal. The students also calculated the impact of velocity using the same metals as they were dropped on to a base of plaster of Paris.

This innovative approach to revealing the secrets of the power and strength of this mythical hammer proved to be very effective and fascinating.