Imagine going through an average working day only to be notified that your premises are about to be changed forever to accommodate a roundabout and a couple of by-lanes.

This is the situation Cane Vella, a 30-year-old farmer from Mellieħa, and three families who have been working in fields next to Burmarrad Road for generations are facing.

Towards the end of September, Infrastructure Malta placed notifications on the low-lying walls outside their farming territory, land that spreads over 21 tumoli.

The agency originally failed to consider a crucial detail. Right below the segment of the junction that will be restructured with by-lanes and a roundabout is a 500-year-old reservoir which these farmers depend on to survive.

Since then, the families whose livelihoods depend on their land have been nervously waiting around to see if workers are going to show up.

“I honestly don’t get how the government doesn’t understand that the destruction of basic agricultural resources such as reservoirs and boreholes is detrimental to everyone, including the people dishing out these orders,” Cane said, visibly frustrated.

Ġuzi, one of Cane’s uncles, proudly explained how the system works.

“All of the pipes you see here, in between the wall of the house and the reservoir are all hand-built and hand-dug, it’s a very old system. How in the hell are we supposed to believe this ancient system of pipes will withstand roadworks of this kind? Is this right?” he said, making an impassioned plea as he gestured and explained with his old, gnarled hands. 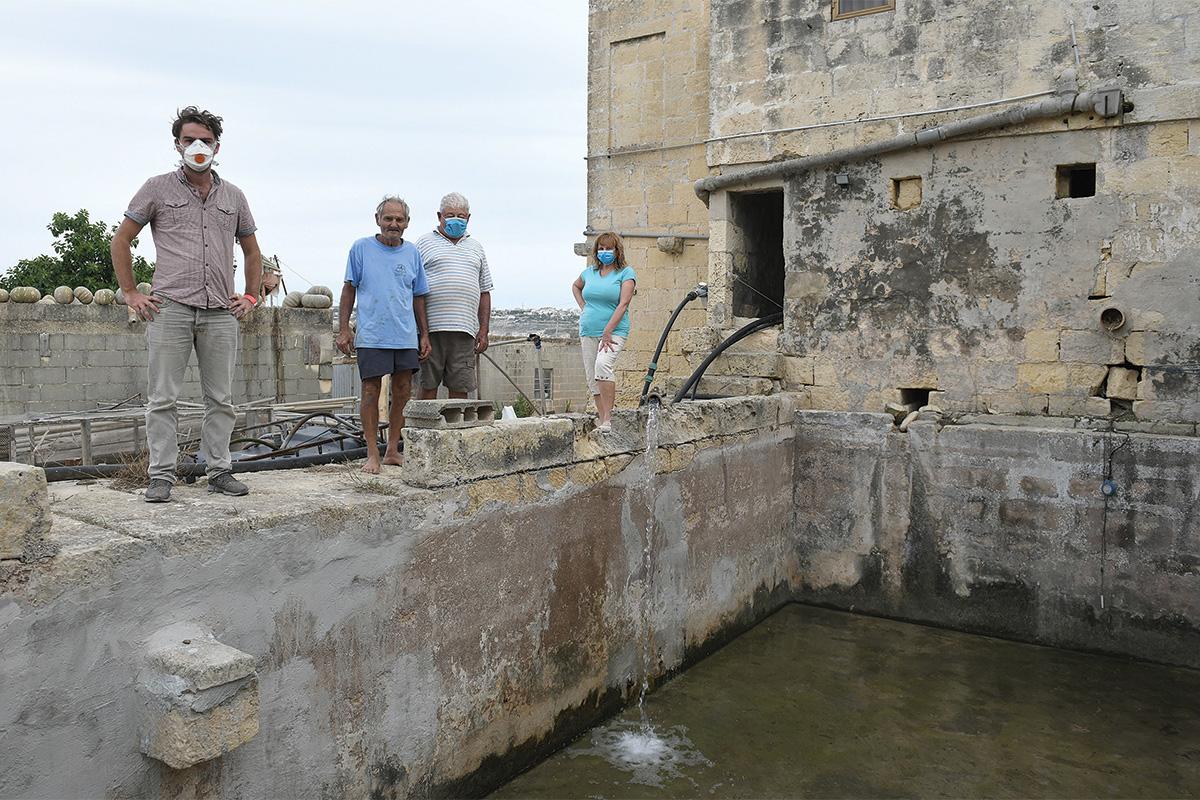 The 500-year-old reservoir which the farmers depend on to survive.

Cane explained how different farmers in the area share the reservoir by rotation, meaning that the limited supply of groundwater is meted out on a weekly basis.

Simply put, this means that farmers stand little to no chance of growing crops in summer if the reservoir’s capacity is affected by the roadworks.

Since Cane brought this fact to the authorities’ attention, Infrastructure Malta promised that the reservoir will be altered by 0.98m2, and mentioned options such as raising the footpath to avoid compromising it.

Overall, the agency defended its approach, stating that it reached out in good faith before the period of public consultation to address such issues.

However, it seems to be adopting two contradictory strategies at the same time. On the one hand, it is promising compensation if the land needs to be expropriated, while also saying that it is listening to the farmers’ demands, without acknowledging that the farmers are overwhelmingly against the project.

The farmers explained how a large body of water naturally pools just below the reservoir, one of the main reasons why the area is so fertile. Any excavation that goes wrong might make the whole area go dry.

Infrastructure Malta failed to explain why this roundabout is so necessary when other, less invasive measures such as a speed camera can serve as an effective deterrent.

The agency simply said that other relevant authorities such as Transport Malta get to decide what is an appropriate traffic-calming measure.

Cane talked about how he always wanted to live a clean life. He believes that the only way to really make an impact with personal consumption is to grow your own food.

“I want to educate young people that this is something that’s worth doing and that it’s beneficial for our environment.

“The environment relies on good practices in farming, which we are using here,” he said. Cane was especially disturbed by the fact that despite his best intentions and willingness to cooperate, he has been met with what he reported as “vague responses and arrogant behaviour.”

“I’m an active person working towards a greater social good; I do not deserve to be treated like this, nobody does.

Being told by the authorities that the project will go through anyway leaves me with no faith in these institutions,” he said, with an audible hint of anger.

He added that it was impossible for farmers such as himself to live in fear of having a field one day, and no longer having it the next day.

“A person who does not know where their livelihood is going becomes very anxious,” he said, underscoring how the older farmers would find it a lot more difficult to move on should the reservoir be no longer usable as it is right now.

Cane said:  “All youths who have landowners in their family should go out in the fields and try to grow their own food so they can understand the importance of this.”