In Egypt’s City of the Dead, centuries-old monuments are being restored and artisanal heritage revived, turning a corner of the vast historical cemetery into a vibrant neighbourhood full of life.

Wood, leather and jewellery workshops have joined those of glassblowers and others near the 15th-century mosque of Sultan Qaitbay, in the east of the capital Cairo.

From the Mamluk period, the celebrated structure – featured on Egypt’s one-pound notes – is surrounded by monumental tombs, dusty alleys and informal housing.

Since 2014, a series of projects financed by the European Union has changed the face of this small section of the sprawling necropolis – home to many people who are unable to afford Cairo’s prohibitively high rents.

Authorities began construction on a major road in July a short distance from the Qaitbay mosque, drawing strong criticism online for the resulting demolitions and evictions of residents of the City of the Dead.

A final resting place for illustrious figures, including singer Farid al-Atrash and writer Ihsan Abdel Kouddous as well as ordinary Egyptians, the Islamic necropolis founded in the seventh century stretches over 6.5 kilometres.

“Before the projects, there was rubbish all over the streets,” said 57-year-old Issem Abou Rami, who owns a small restaurant facing the mosque. “Now, a truck comes every day to collect it.”

Products made in the impoverished neighbourhood are now sold in elegant booths under restored stone arches – and even online.

The renovation efforts started six years ago with the refurbishment of a drinking trough for animals, and then, the reception area of a residential complex of the sultan.

The EU contributed nearly a million euros toward the latest project, “The Heritage for the Living, in the City of the Dead”, which launched in 2018 and focuses on social development.

The project coordinator, architect Agnieszka Dobrowolska, was a linchpin to the area’s metamorphosis.

She supervised the restorations of the monuments and the renovation of the workshop and their signage, as well as designed jewellery and leather products inspired by Mamluk motifs.

“When we first came here, our main object was to conserve the monuments,” she told AFP.

“And we quickly realised that we cannot simply conserve the monuments, in disrespect to the people who live and work in the area,” added Dobrowolska, founder of Archinos Architecture, which has worked on numerous conservation projects in Cairo.

Work in the ateliers was interrupted for several weeks due to the COVID-19 pandemic, but now the workshops are again up and running, with some 50 women making leather products and jewellery, all stamped with the local brand Mishka.

Aida Hassan, 45, has worked in the leather workshop for three years, and said she is happy to be earning “1,500 pounds (€81) per month – and sometimes more”.

“This project has helped improve my income,” she added, saying she had gone on to train other women in leatherwork.

Hundreds of women and children in the neighbourhood have benefited from courses and workshops on subjects as diverse as science and technology, English language and sports.

For the EU, the primary donor to the project – due to end in 2021 – the social elements of the programme were key, said Christian Berger, head of the EU delegation in Egypt.

“Our intention is to support this type of project that benefits immediately vulnerable groups and disadvantaged groups, projects that have a broader socio-economic impact,” Berger said. 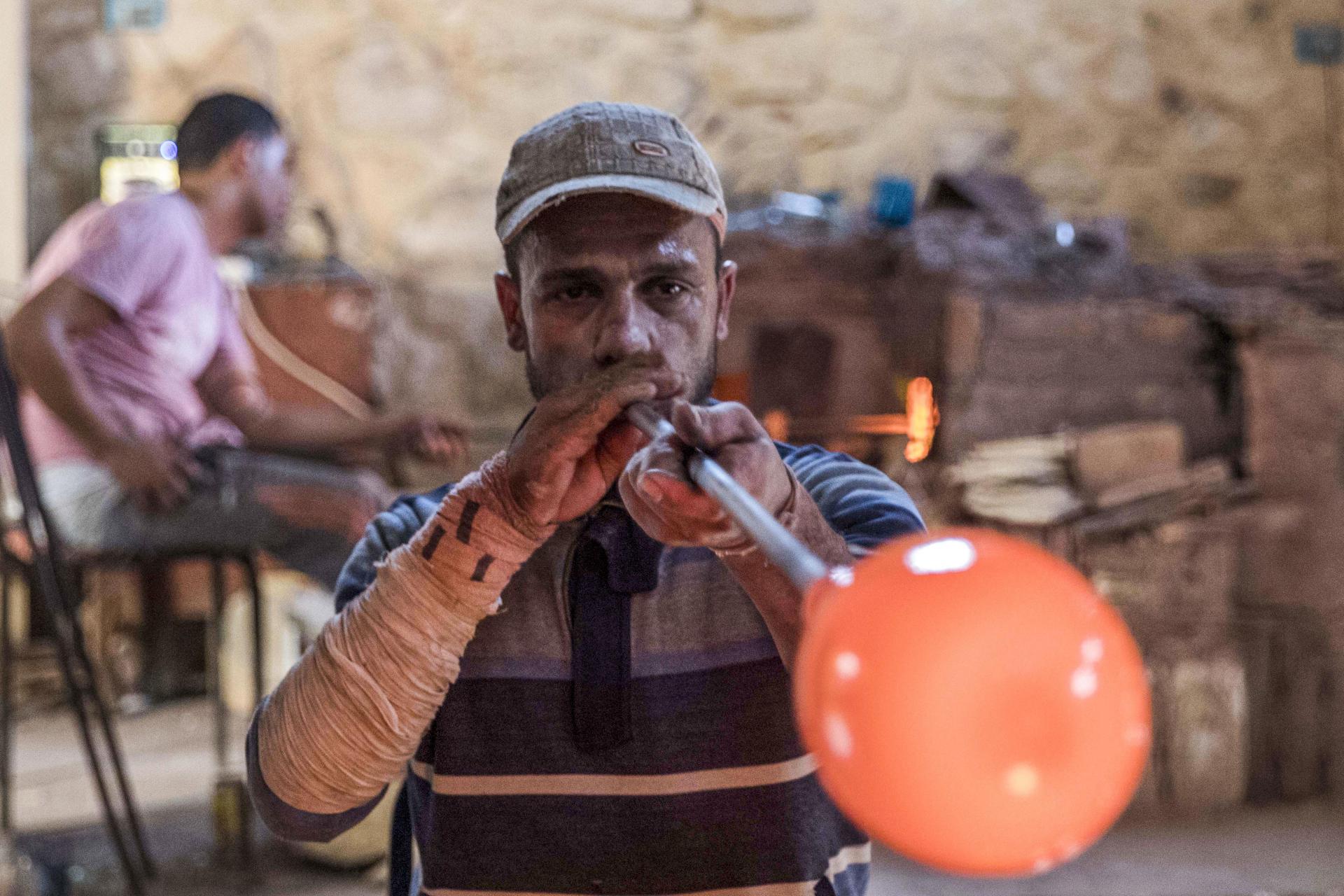 A glassblower sculpts a vessel at a workshop. Since 2014, a series of projects financed by the European Union has changed the face of this small section of the sprawling necropolis – home to many people who are unable to afford Cairo’s prohibitively high rents.

The neighbourhood has hosted concerts, from jazz to folk and traditional Egyptian music, and visual artists from Egypt and abroad have come to show their work.

The aim is to bring “contemporary art and culture here to enhance diversity of cultural expression (and) artistic expression, to build bridges between east and west,” said Dobrowolska.

Another hope of the project in transforming the neighbourhood is to draw in tourists.

The City of the Dead is sometimes an object of superstition due to its status as a necropolis, and is not a usual stop on mainstream Cairo tours.

But it is the tourists who are looking for something out of the ordinary that Dobrowolska said the project is counting on.

“We seek to attract tourists who are off-track from the mass tourism destinations – people who might appreciate and enjoy the unique urban character of the necropolis,” she said.