Activists also called upon the government to build a horse sanctuary for karozzini horses during a protest in Valletta on Saturday.

No ban should happen overnight, but should be phased in, Animal Liberation Malta member Robert Xuereb said, adding that the government should set up sanctuaries for the horses to be taken care of.

Horses have to carry a tough weight in stifling heat and trotting on boiling asphalt. 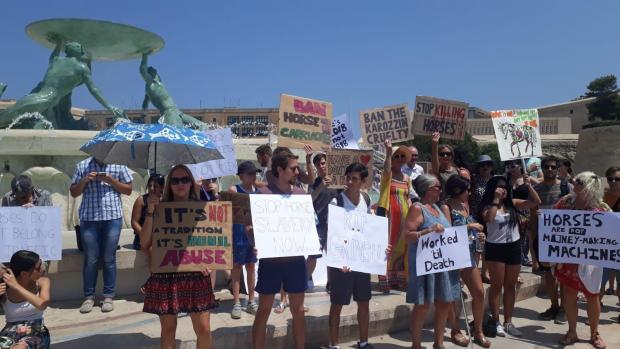 Dozens of people attended the protest following the incidents which caused outrage on social media and led parliamentary secretary for animal rights Clint Camilleri to call for laws to be revised.

Karozzini owners had warned that outlawing the practice would lead to the death of working horses, since they simply did not have enough resources to take care of the animals.

But activists insisted drivers had “other options” and insisted that horse-drawn carriages should be banned gradually.

"Look at us sitting down, we are not doing anything but we are sweating,” one activist said. “Now imagine how the poor horses must feel walking in the heat,” she added.

Mr Xuereb said other measures should be taken in the meantime, pointing to stronger enforcement laws.