Monuments and memorials exist as a means of fixing history, providing stability and permanence through the collective remembering of a person or an event, around which public rites can be organised. 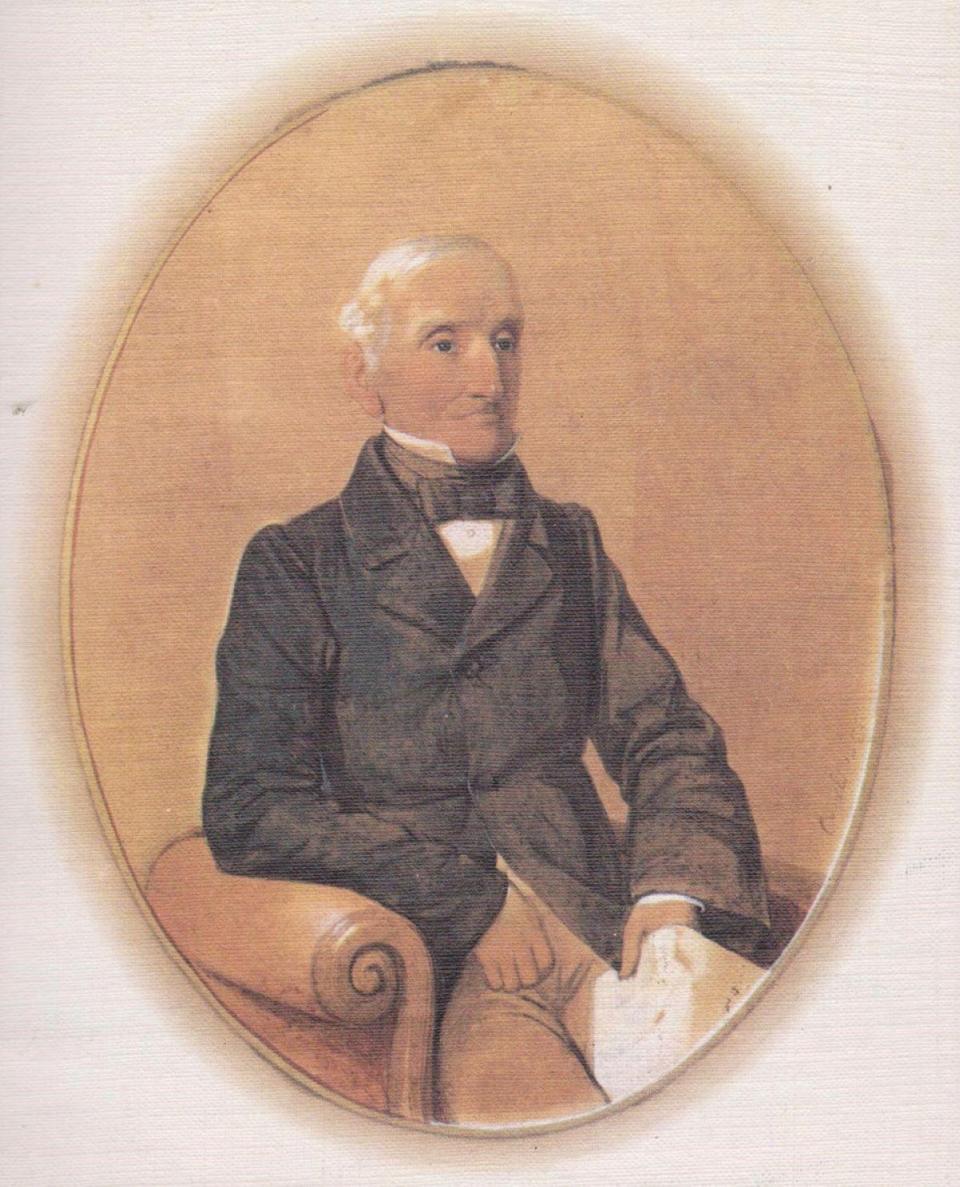 In Malta, it is most heartening to see monuments erected for deserving former public personas, including politicians. A welcome local custom, mostly since Independence, has been to put on a pedestal all departed presidents and prime ministers, in the understanding that their public contribution credited such memorialisation. With the recent addition of Malta’s first prime minister, Joseph Howard, this practice has been wisely stretched back to the first self-rule parliament of 1921.

However, this nation has forgotten those pioneer political patriots whose personal sacrifices, determination and community leadership served to lay the fundamentals of a future Maltese representative polity in the face of unsurmountable British colonial adversity. 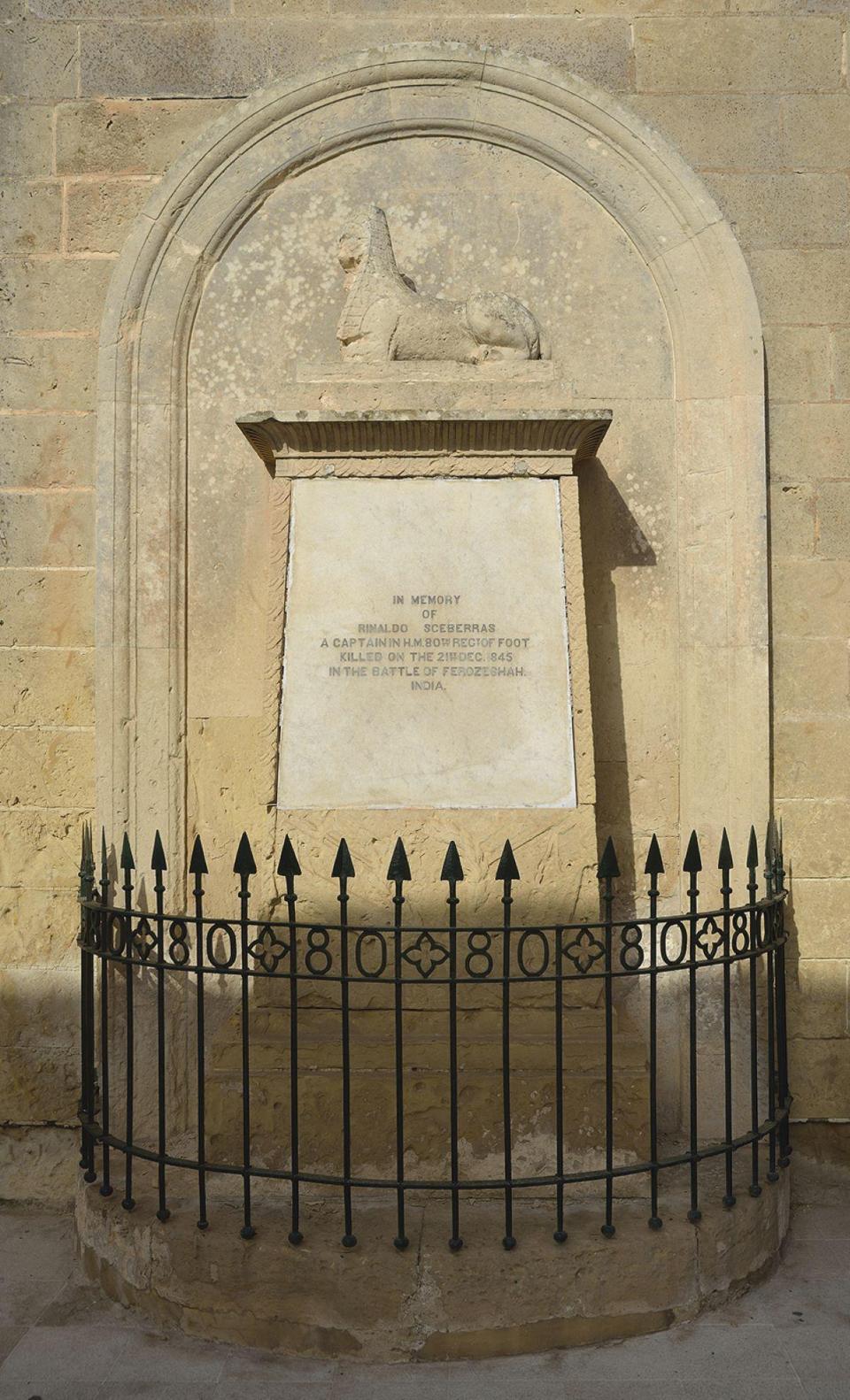 The memorial at the Barrakka Gardens to Camillo’s eldest son, Captain Rinaldo Sceberras, who was killed in 1845 in India, aged 37.

Camillo Sceberras, who together with Giorgio Mitrovich are considered to be the doyens of liberal patriotic politics in the 19th century, has been totally forgotten. Today, 250 years since his birth on August 4, 1772, we cannot commemorate him properly, not even with a modest wreath-laying ceremony at his grave because this was destroyed in the World War II bombing of the Dominican church of the Annunciation in Vittoriosa. Worse still, Sceberras, co-founder of the Comitato Generale Maltese (11,712 registered members), the first organised entity to militate for an elective political representation during the 1830s-40s, has no memorial to his commendable work.

Sceberras was highly regarded in his time even by his antagonists, including the British authorities. He was often described as a man of principles, a disciplinarian, prime mover of most petitions to the British authorities in Malta and in London, head of an old and opulent Maltese family. Endorsing strong secular opinions in politics, he was imbued by his long years of service in the French army under Emperor Napoleon. Hard-headed and determined in his fight for the rights of his fellow Maltese, he managed to bring together the aristocracy and the bourgeoisie. He struggled and spent his personal fortune, including his inheritance, to push for more civil liberties, often joining others in financing initiatives such as those of his close collaborator Giorgio Mitrovich’s political missions in London.

Sceberras’ contested strain, nurtured in revolutionary France, contrasted with the local conventional political milieu. Because of his background and frequent petitions, the colonial authorities suspected him of anti-Britishness. This perception, fed through long years of British loyalty propaganda on the minds of Maltese society, led to patriots like Mikiel Anton Vassalli, Camillo Sceberras and Giorgio Mitrovich to be obliterated from the collective memory of the nation not only after their deaths in 1829, 1855 and 1885 respectively, but also till the present time.

Born in Valletta on the feast of St Dominic, Camillo Sceberras was the ninth child of Baron Pasquale Sceberras Testaferrata. He was instructed at home and at the seminary. In 1775, under Grand Master Emanuel de Rohan-Polduc, his father was elected Capitano della Verga.

In 1786, as a teenager, Camillo accompanied his elder cleric brother (later cardinal) Fabrizio to the papal state of Narni, where he was governor. When the 1789 French Revolution broke out, Sceberras was excited by the prospects of the new ‘democratic’ ideals of liberty and equality. However, he remained with his brother, moving to Città di Castello and to Fano, as the prelate followed his career.

While his other elder brother Michele joined the Bavarian army and fought against the French, Camillo remained loyal to his Francophile ideals. Young General Napoleon Bonaparte crossed the Alps into Italy in 1796, defeated the Austrians and entered Milan. A year later, he took Fano. At first, Governor Fabrizio was house-arrested but Camillo intervened. Shortly afterwards, Bonaparte invited them both to a banquet.

Camillo was back in Malta in 1797 and welcomed Bonaparte in June, 1798. He was appointed member of the Municipality of Valletta but when the peasants’ revolt broke out in September, Camillo left Malta with former commissioner Michel Louis Regnaud to report to Paris about the situation.

Once in France, Sceberras started his military career in the French Army as a sub-lieutenant and commander of the Maltese Legion. During the peace period of the Treaty of Amiens in 1802, Camillo joined the 25th Light Regiment. While serving in Italy, on June 3, 1807, Sceberras married Maddalena Ravanelli in Milan. In 1810, now a captain, he passed on to the Fourth Light Regiment. In 1812, with a brilliant military career behind him, Sceberras was appointed official of the city court of Mantua. After Napoleon’s fall in 1815, he returned with his family to Malta, where he took possession of his inheritance. In all, Maddalena gave birth to 12 children. 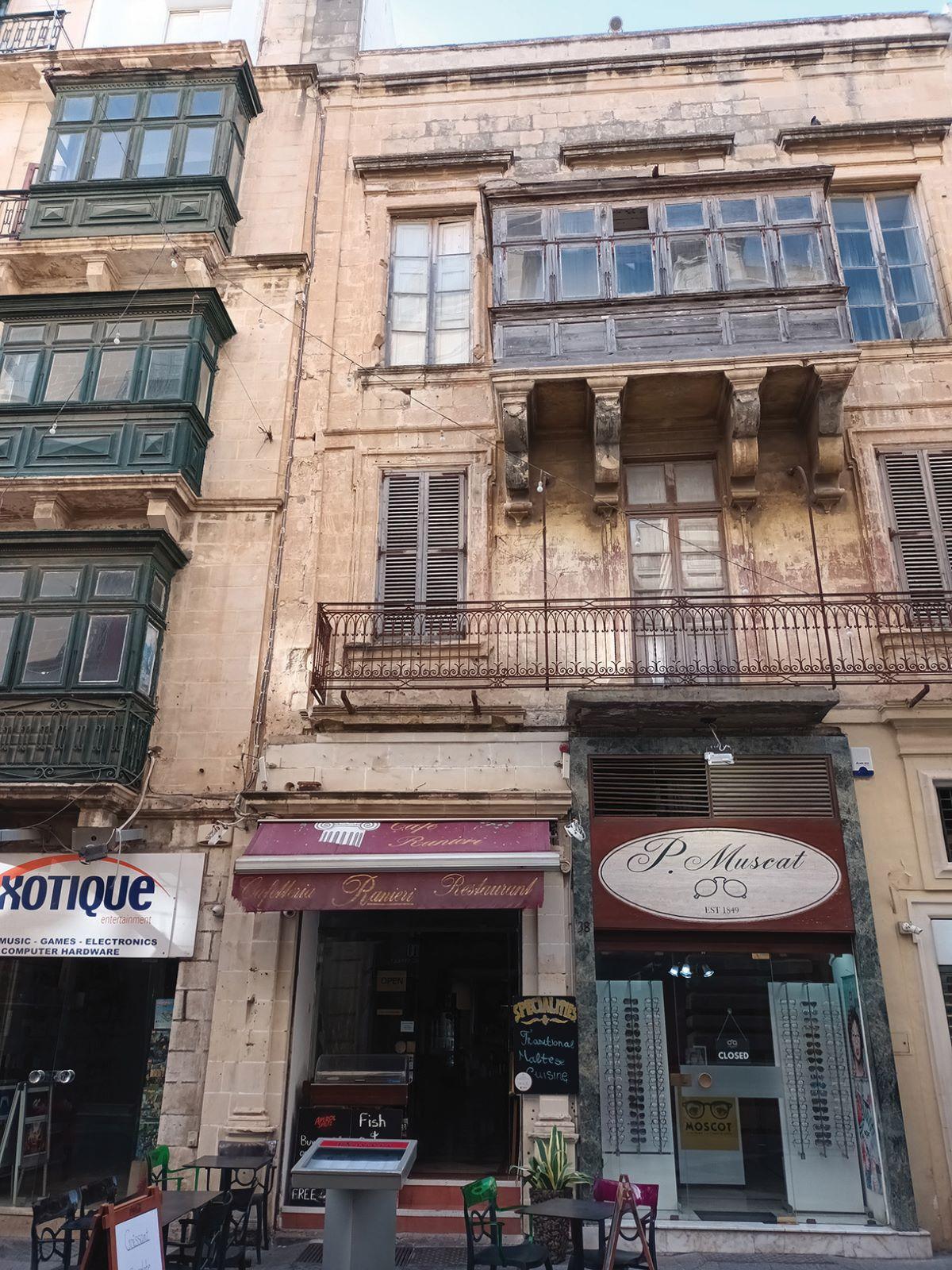 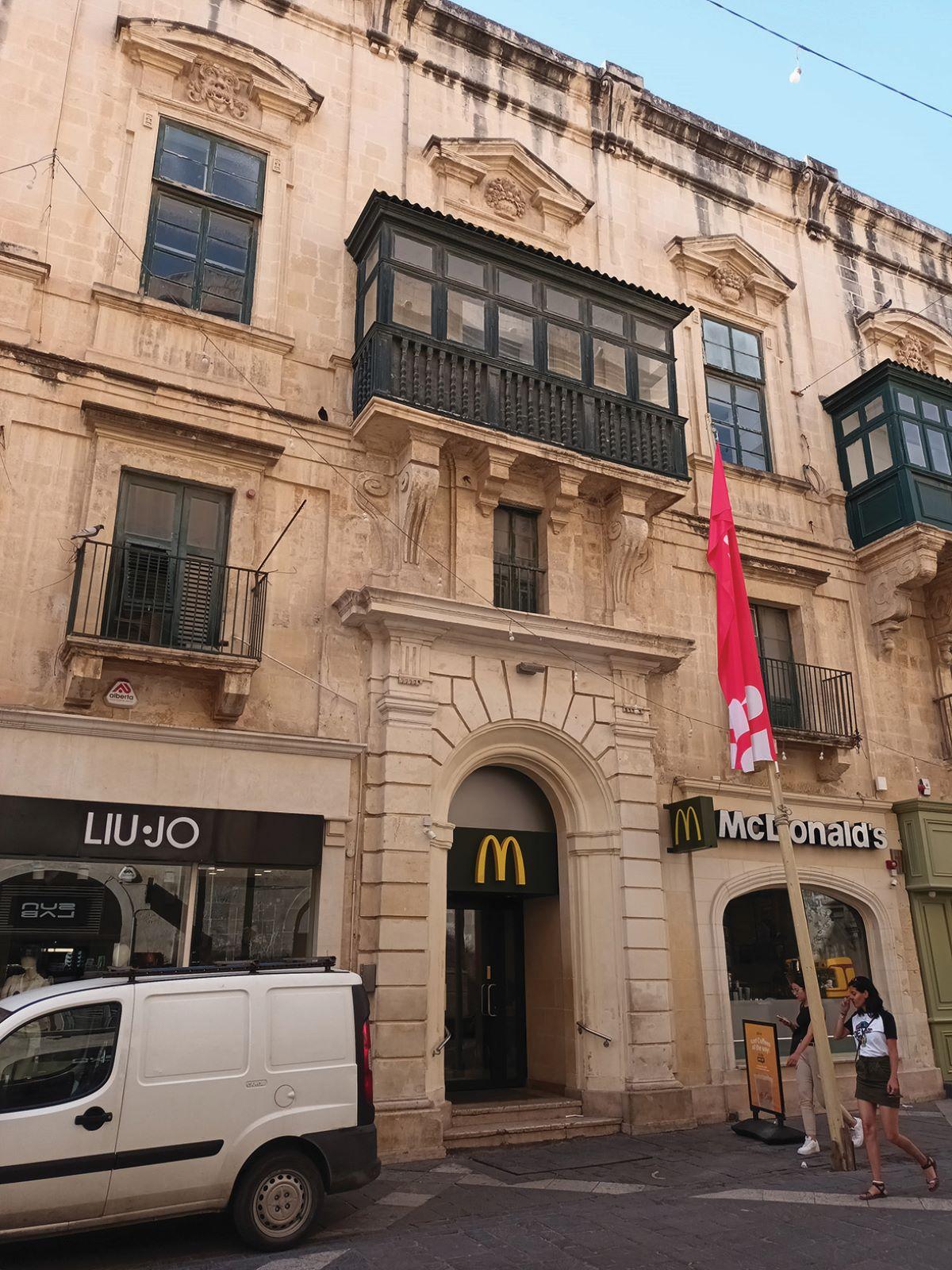 A few doors away at number 24, the Comitato Generale Maltese used to meet twice a week in the 1930s.

Settled in Malta, local socio-political problems alerted Sceberras’s egalitarian mind, enticing him to embark on the promotion of his ideas among friends, in coffee shops and in gabinetti di lettura.

During the first half of the 19th century, the only means to air grievances was through a petition to the British authorities. While retaining Britain’s protection, most Maltese leaders attempted to have a decisive say in the administration of their country. They clamoured for freedom of the press to boost support but since the British governor had total monopoly, most of their petitions were ignored. British Governor Frederick Ponsomby defended his position by stating that real colonial power rested with England.

In 1830, Camillo Sceberras and his collaborators submitted a series of petitions requesting freedom of the press, reforms in the judicial system, betterment of public instruction, the quarantine system and the need for political representation. In 1832, hundreds, including Giorgio Mitrovich and Georges Grognet (later known for his Mosta Rotunda) signed the petition.

The petitioners mainly objected to the fact that all legislative power was in the hands of one man, the British governor. They also insisted to have a clear code of laws and efficient administration, complaining about the low salaries of Maltese public officials compared to hefty ones for the British. They protested against high duty rates, lack of initiatives in agriculture, mercantile shipping and employment opportunities. Hundreds were forced to live in destitution or face emigration.

They also insisted on reinstalling the Consiglio Nazionale, which Commissioner Alexander Ball had disbanded when the French left in 1800. The governor explained that since Malta was a colony, such a council would create problems when the wishes of the mother country and the interest of the colony were at odds. Mitrovich remarked that the situation was much better under the French. 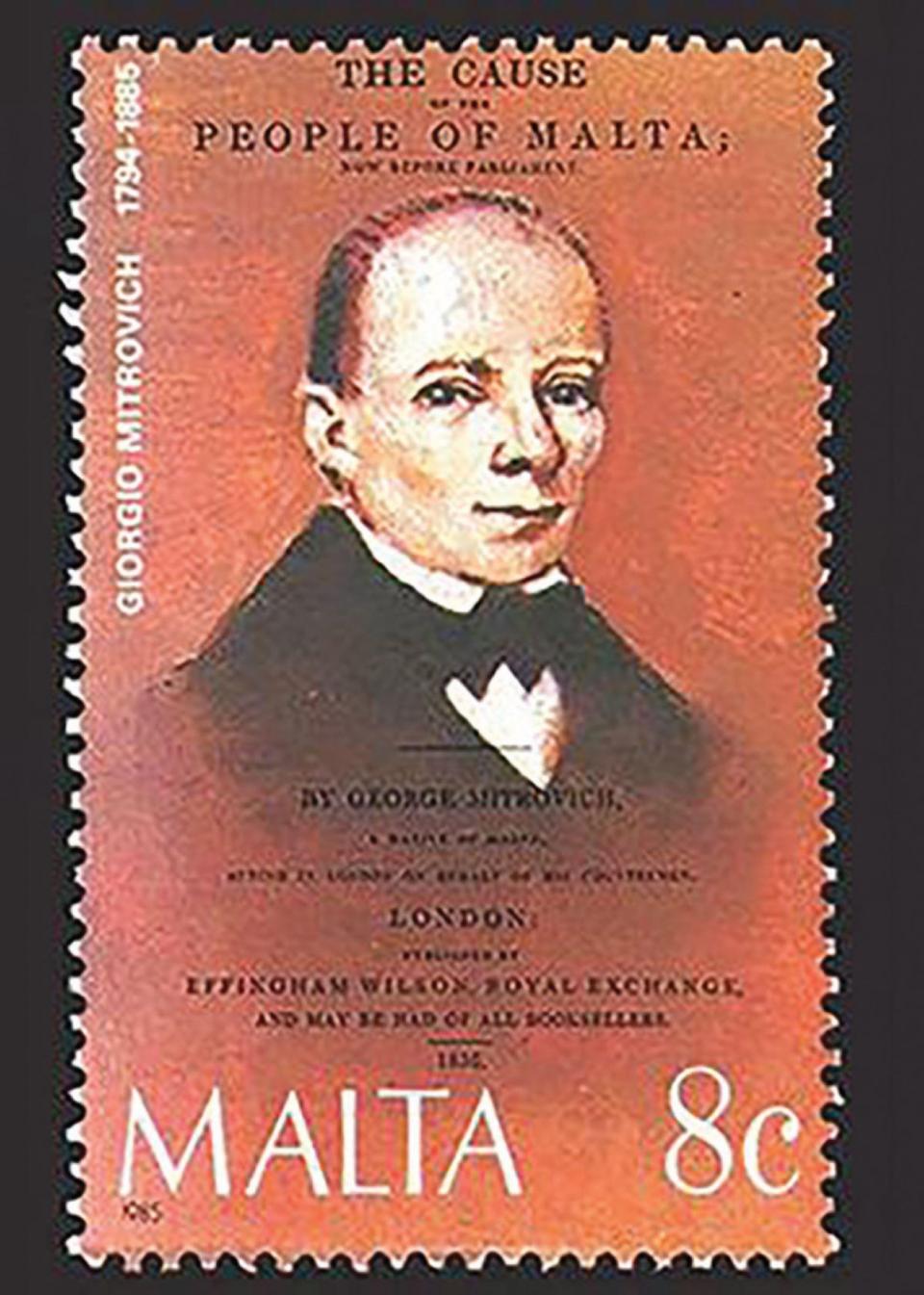 A stamp issued in 1985 to commemorate 100 years since the passing away of Giorgio Mitrovich, collaborator of Camillo Sceberras.

In 1835, with the full support of Camillo Sceberras and a number of British MPs, foremost among them William Ewart, Mitrovich in London published a set of Claims and an Address to the Maltese Nation, something that was not allowed in Malta. The Claims echoed the petitions that had been sent to the governor, including excessive duty; high pensions paid to non-Maltese; trade restrictions; excessive expenses in tribunals; a non-free port; confusion in laws; a taxed mercenary university; omnipotence of the governor; and a censored press. Mitrovich distributed 1,600 copies of his Claims among British parliamentarians and sent Sceberras 400 copies to sell in Malta.

To calm the commotion, the governor set up a new council in 1836, consisting of the bishop (described by the governor as “a decrepit old man”) and members mostly representing British interests.

On June 7, 1836, four more petitions were tabled in the House of Commons, leading to the appointment of a Royal Commission to visit Malta. Sceberras formed a 20-member Comitato di Petizione to prepare a new petition to the king, which took time to submit as many hesitated to sign because of feared victimisation by the government. 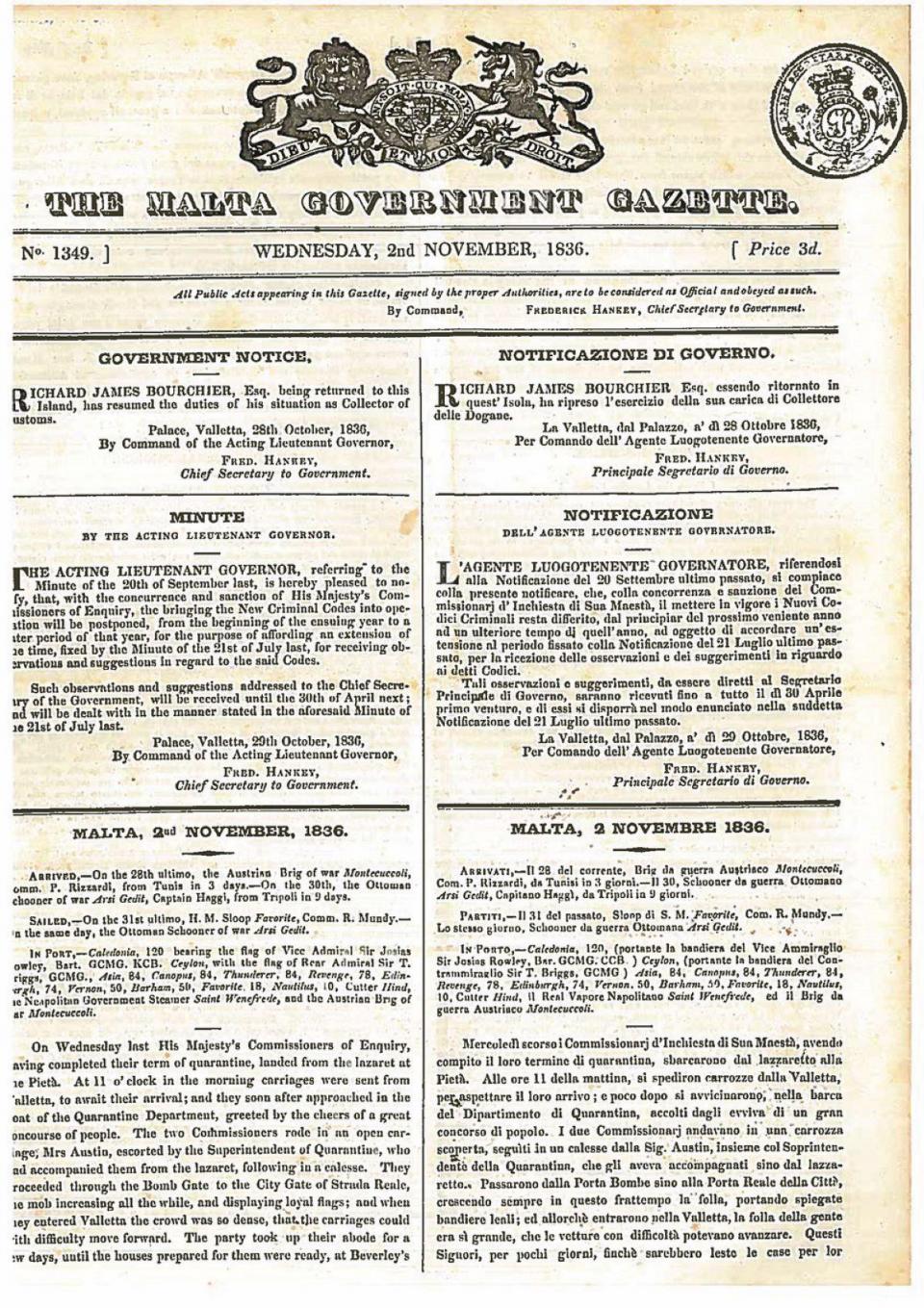 The Malta Government Gazette of November 2, 1836, reporting the arrival of the British Royal Commission. Photo: Courtesy of the Bibliotheca, Valletta

The Royal Commission arrived to a big welcome in Valletta. After meeting with the main protagonists of the Comitato Generale, freedom of the press was introduced in 1839, followed by a series of frequent changes of the guard at the governor’s palace in Valletta.

In 1846, a petition was sent to London regarding Governor Stuart’s order to the army to attack members of the public with bayonets in Valletta in order to stop revellers wearing Carnival masks. Sceberras turned down a ball invitation, as he did not want to meet British governors whose policies went against the island’s needs.

Governor Richard More O’Farrell, an Irish Catholic civilian, arrived in 1847. Though clashing with Sceberras’s family because of their nearness to the Italian exiles, who supported most of the Maltese petitions, O’Ferrell finally introduced a partly elective assembly in 1849.

The first election under the British was held in August 1849 with 3,486 electors; each voter had four votes. Sceberras received only 34 votes and Mitrovich 26, although the latter was then elected in 1855. The meagre result the doyens received was due to their friendship with the liberal Italian refugees, and the anticlerical attitudes of Sceberras’s clan, which must have irked the Maltese religious society. Three priests out of eight members were elected, with two from the Comitato Generale.

The first election under the British was held in August 1849 with 3,486 electors; each voter had four votes. Sceberras received only 34 votes

Sceberras had the interests of farmers at heart. He was a member of the Società Agraria, founded in 1844. The philanthropic organisation held its first exhibition at Buskett on June 29, 1854. He died on July 1, 1855.

This brief feature does not do justice to patriot Camillo Sceberras, whose deserved recognition has been ashamedly overlooked. The then French consul Dominique Miège, a contemporary of Sceberras and Mitrovich, chronicled the couple’s liberal public efforts to improve democracy in Malta in his 1840 Histoire de Malte. Later, in 1991, Robert Farrugia Randon, one of Sceberras’s descendants, published expanded research.