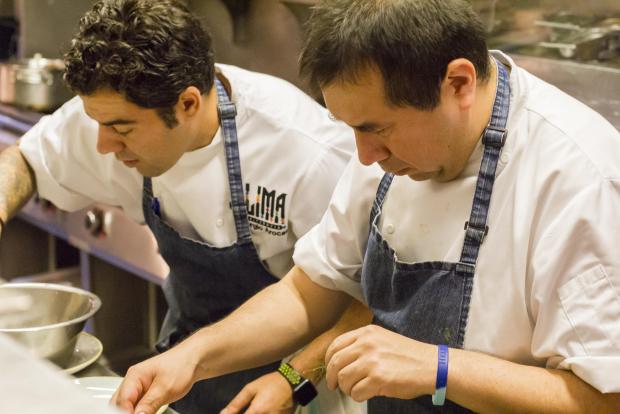 At work at Lima Fitzrovia.

There was a far-off time when I firmly believed that London nosh equalled fish and chips, takeout Chinese from Camden and waffles from the stands in Oxford Street. Which was pretty much all I could afford.

This was a point of view shared by many Maltese – cheap carb-loading on a straight-on shopping trip was the order of the day. Fast forward a decade or so and, thank the gods of taste, this is no longer so. London has become a lot more than a trip to the dreaded Primark, a quick stop at Madame Tusseaud’s and Buckingham Palace, and fast food for empty pockets.

Today, the city is a regular stop for serious foodies. From Michelin restaurants, to ethnic cuisine, hipster joints and quirky DIY eateries, it’s all happening in the capital of kul. Should non-Maltese speakers be reading this, kul is our word for ‘eat’ and this trip was going to be all about that.

The research started early on. The truth is that the city is home to some of the most ‘in’ restaurants that come with month-long waiting lists, and we didn’t want to be left out in the cold. The mission was simple: a traditional British restaurant (if such a thing existed), a high-tea place (you don’t get much more traditional than that, do you?); an exotic restaurant, just to see how London deals with the idea of ‘weird’ food; and a ‘Continental’ one. 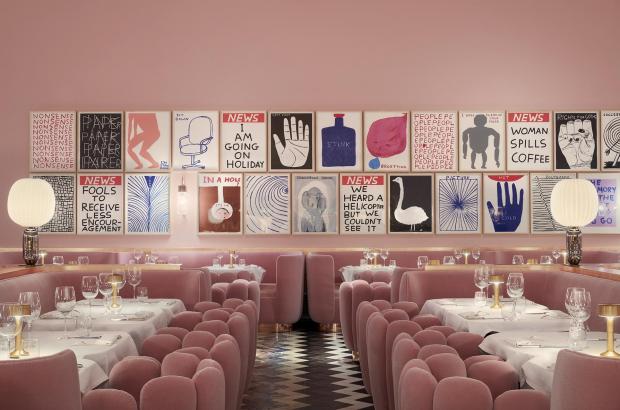 The Gallery, at Sketch.

We touched down at Gatwick and, some hours later were happily seated at Sketch, housed in an exquisite palazzo in Mayfair. Sketch (https://sketch.london/), for those not in the know, is popularly touted as ‘the most Instagrammed location’ in the UK. I walk in, not sure what to expect. I mean, a high tea is a high tea, right?

Well – not quite. Put it this way, as soon as I stepped into the palazzo I felt exactly as Alice must have felt when she took a tumble down the rabbit hole. Forget the idea of a cosy tea.

Sketch is all about the decadence, starting with the decor by celebrity architectural designer India Mahdavi, which wouldn’t look out of place on a Wes Anderson set. You go through two checks before you’re allowed into the inner sanctum of The Gallery at the back and, when you do, you will be completely blown away.

There’s pink, a lot of it, but somehow it’s not annoying. A massive rose bar dominates the backdrop. An exhibition by David Shrigley; tables with cute, velvet stool and quirky crockery, and the tableau is complete. Just being there is an experience.

The ‘tea’ that follows is pure pleasure, four courses of mouthgasms, washed down by our choice of tea and Pommery champagne. The finger sandwiches are a delightful twist on the tried-and-tested formula. The warm scones crumble most delightfully in my mouth.

A Victoria Sponge follows by a most-needed lull and more champagne. It all comes to an end with a selection of petits gateaux, each morsel delicate and bursting with sumptuousness. By the end of it, my palate is more than sated, but just being at Sketch is such fun that I spend another half-an-hour listening to the live string quartet and finishing off my pot of Sichuan tea. As foodie experiences go, this one ticks all the boxes. Quite the welcome to our foodie tour, London. 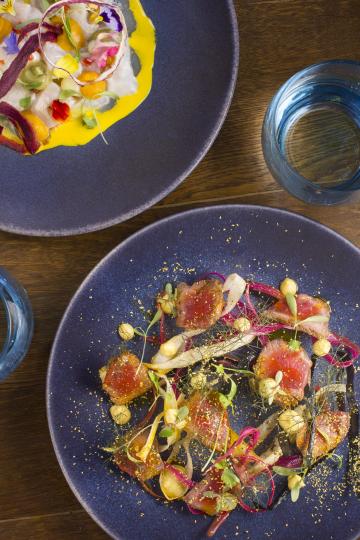 The colourful dishes at Lima Fitzrovia.

Next stop, quite a few hours later, was as different from Sketch as chalk is to cheese – Lima in Fitzrovia (www.limalondongroup.com/fitzrovia), recipient of a Michelin star in 2013 and offering contemporary Peruvian cuisine. I, of course, had no idea what this meant, but knowing that Robert Ortiz and Virgilio Martinez (the latter ranked number 4 in the World 50 Best List) are the culinary brains behind this offering, I needed no more convincing.

Given our group’s rather embarrassing ignorance of what constitutes Peruvian cuisine, our waiter gave us a charming run-through of what to expect – a melting pot of flavours and techniques from various cultures, fused into one gloriously eclectic cuisine.

With some help, we made our choice of dishes, opting for a sharing approach, and kicked off proceedings with, as is only right, a traditional Peruvian cocktail, the notorious Pisco Sour.

Why notorious, you will ask. This cocktail tastes divine, the ingredients – egg white, brandy, lime juice, Angustura bitters and syrup – seamlessly fusing into each other when it’s as expertly mixed as it is at the Lima. The Pisco Sour was to set the tone for the rest of the dinner. It looked vibrant, tasted amazing and left us with a smile on our faces – the same can be said of every dish that made it to our table that evening. 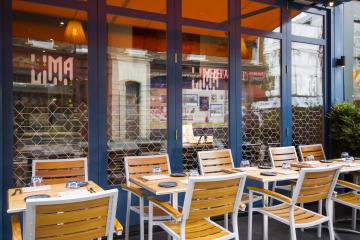 The beauty of Oritz’s and Martinez’s genius is that they take traditional ingredients, add a bit of a twist with seasoning and presentation, and before you know it you’re looking at a Prawn and Avocado ceviche, but not as you know it. A dash of ginger here, some tamarind there and Plantain chips to finish it off, and the end result is an explosion of colour and flavour.

These Peruvians clearly know how to do their thing well. Everything I tasted at Lima brought with it a pleasant frisson of surprise, no matter how mundane the dish may have sounded at first. Pakchoi, duck, octopus, potato stew.

Everything was a burst of joy, brought to a masterful end with the traditional Alfajores (a concoction of almond, honey, hazelnut and Dulce di Leche) icecream, served with honeycombe. And, of course, Peruvian coffee with Pisco. Lima, I’m a true believer – exotic foodie stop on the London circuit, check.

The following day we made our way to the third experiment on our foodie list, a chef whose creations I had been wanting to experience for quite a while. I mean, a British celebrity chef specialising in Italian food? What could be more unlikely? Theo Randall at The InterContinental (http://www.theorandall.com/) is quite the sought-after name, so I had full faith that this unlikelihood would lead to something exquisite. 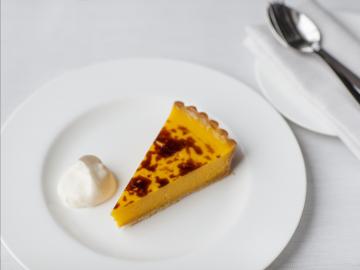 Lemon Tart, by Theo Randall at the InterContinental

Although I’m usually wary of restaurants within hotels, The InterContinental is beautiful, situated on the prettier end of Park Lane, its sheer heritage (the building stands on the site of the Queen’s childhood residence) willing you to walk inside and explore.

I happily explored as far as the restaurant. Situated discreetly towards the back of the ground floor, it is spacious, its minimalist and earthy tones contributing to the wonder feel of infinite space. We were greeted by an Italian waiter, who packed all the charm traditionally associated with his fellow countrymen.

The cuisine at Theo Randall’s is described as “simple, rustic, Italian”. The menu reflects this. Burrata, Taglierini con Gamberetti, Ravioli di Zucca, Costata d’Agnello,... they’re all there. Simple, traditional dishes that in reality are anything but simple and require a degree of perfection and creativity in order to impress. Our waiter – who hailed from the Tuscany region, I couldn’t help but enquire – helped us settle on the afore-mentioned dishes, as well as the Costata d’Agnello (rack of lamb) and the Fegato di Vitello (veal liver).

All this, accompanied by a bottle of Campania’s finest, the Greco di Tufo. Albeit British-born, Theo Randall’s really turns out to be quintessentially Italian, in that the food turned up tasting like a work of art that was effortlessly put together.

Each ingredient in every dish stands out, the flavours flirting with each other coyly. Using fresh, seasonal produce does indeed make a discernable difference between your basic Costata d’Agnello and the one you get to enjoy here.

The experience lived up to the its promise all the way up to the ultimate test, dessert, which was a plateful of everything so we could share. Everything was top notch, but a special shout-out goes to the Amalfi Lemon Tart and the Raspberry Pannacotta. An espresso later, we were purring in satisfaction. It’s not everyday that a chef can do Italian better than the Italians, but Theo Randall pulls it off. 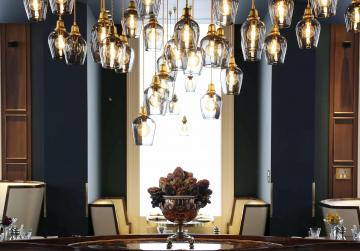 London was definitely still winning. But it was time to check out some traditional British food, whatever that may mean (snigger). Our final foodie destination was also part of a hotel: Plum + Spilt Milk (www.plumandspiltmilk.com) is located on the first floor of the Great Northern Hotel.

It turned out to be the perfect restaurant for a leisurely lunch as it overlooks bustling King’s Cross St Pancras and provides some beautiful people-watching opportunities, especially when seated at one of the window tables.

The decor at both the Great Northern and Plum + Spilt Milk is what I would describe as ‘modern chic’. But, despite the distinct whiff of sophistication, there is nothing stuffy about it.

We had the good fortune to be greeted by Daniel, one of the best waiters ever – friendly without being intrusive, efficient to the right degree. Bubbly in hand, we went over the menu to pick our ‘modern British’ dishes with Daniel’s suggestions.

All the popular, hearty ‘Sunday’ offerings are all present, but they are served with a twist, as I was soon to find out. Starting out with a Crispy Duck Leg and seared breast, served in plum sauce, and Seared Loch Fyne scallops, with roasted cauliflower and a delightful sherry vinegar caramel, we immediately decided that Plum + Spilt Milk could single-handedly reverse the decidedly iffy reputation that British cooking has suffered from through the years. 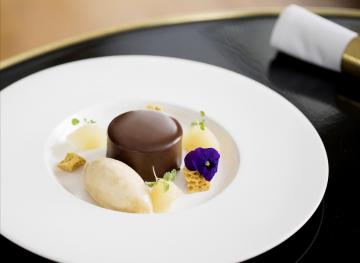 Clearly, everyone else had gotten it wrong: this was what British cuisine was supposed to taste like. Hearty, yet with flavours that don’t overwhelm. We balanced the heartiness of the starters by following up with a Brixham Turbot, in a Manzanilla sherry and clam broth; and Guinea Fowl with smoked bacon and little peas. Plum + Spilt Milk do comfort food like no other place, with all the flavour and none of the guilt.

To finish off with, we had a Steamed Lemon Sponge Pudding and a Dark Chocolate Mousse with honeycomb ice-cream. Both were to kill for. And I don’t mean that metaphorically; I would have loved to see anyone attempt to steal a forkful.

But it wasn’t enough – coffee was accompanied by Salted Caramel Truffles, signed off with a chocolatey ‘have a good flight’. This was Daniel’s extra touch, after he found out that we’d be flying back to Malta the following day. Just like the fabled English dowager, Plum+Spilt Milk is gentile and feisty at the same time, cloaking its undeniable sophistication underneath a veneer of fun and flavour.

The verdict’s out on London. Fancy restaurants that aren’t just fancy but are actually pretty stunning on all fronts. That you can enjoy without taking out a second mortgage. London, you surprising minx, I’ll be back.