In his seafaring experience spanning a quarter of a century, Joynal Abedin admits he never experienced the sort of weather conditions that drove his bunkering vessel aground at Qawra Point on Saturday. 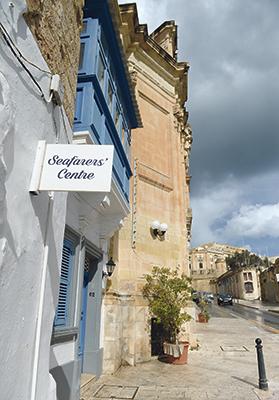 Any help – including clothing, shoes, toiletries and food – would be greatly appreciated by the seven seamen stranded at the Seafarers’ Centre in Valletta.

“As we realised that the wind was picking up, I asked the Maltese authorities for permission to seek shelter closer to shore,” the captain of the 885-tonne Hephaestus told the Times of Malta on Sunday.

“I started the engine and began preparing to navigate the vessel inland, but all of a sudden – within minutes – we hit the rocks,” Capt. Abedin said.

At the time, Malta was engulfed by a thunderstorm and northerly Force 6 to 7 winds.

As fate would have it, the ship ran aground not far from the site where St Paul and St Luke are believed to have been shipwrecked about 2,000 years ago. It also happened to be the day that Malta celebrates the Feast of St Paul Shipwrecked.

“Nobody can fight Mother Nature, and we thank God we are safe. I have never experienced anything similar, not even when navigating much rougher seas,” he said.

The five Bangladeshi and two Russian crew members, who had been out at sea for some four months, had spent the last month or so waiting authorisation to ‘sign off’, get their salary and head back home. 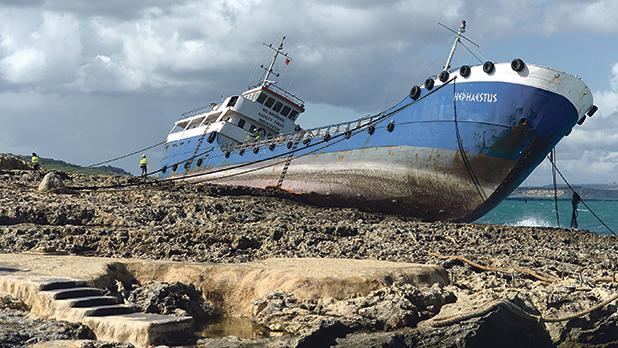 The Hephaestus ran aground not far from where St Paul is believed to have been shipwrecked. Photos: Matthew Mirabelli

Port and Freeport Chaplain Fr Joe Borg was asked to house the crewmen at the Seafarers’ Centre, which sits alongside the Ta’ Liesse church in Valletta.

The centre opened its doors in 2016 following collaboration between the Apostleship of the Sea Malta, the Grand Harbour Regeneration Corporation and the Transport Ministry.

It was furnished with the help of the International Transport Workers’ Federation.

The Seafarers’ Centre is called Dar MV Moor, in memory of the 29 Maltese seaman who perished in April 1941 when that vessel hit a mine and sunk.

The main aim was to host seafarers who find themselves in some difficulty, something the centre definitely lived up to over the weekend, Fr Borg said.

When seafarers are taken ill, they are hosted at the centre after they are discharged from hospital because their vessels will have continued on their routes.

Fr Borg noted that the seven seamen turned up with nothing but the clothes they were wearing. On hearing of the unfortunate incident, some Maltese benefactors turned up with blankets, food and clothing, similar to what happened in the account of St Paul’s shipwreck.

Fr Borg said that the sailors would appreciate any help from the community – including clothing, shoes, toiletries and food.