The police are investigating a suspicious car that may have been tailing Msida car bomb victim Romeo Bone, The Sunday Times of Malta has learnt.

Police sources confirmed investigators were looking into CCTV footage of a “blue saloon car” which was spotted several metres behind Mr Bone’s burning Renault Mégane on Marina Street, Msida, moments after the bomb went off.

“People inside the car may have been observing Mr Bone,” the sources said, declining to elaborate for fear of jeopardising police investigations.

Mr Bone, 40, of Floriana, lost both his legs and is still being treated at Mater Dei Hospital after the explosive device, constructed to inflict maximum damage, detonated in his car when he stopped at the traffic lights near the General Workers’ Union Monument last Monday.

The police sources’ information tallies with what an eyewitness told this newspaper: that the first police officers on the scene were “very interested” in a car other than that being driven by Mr Bone. 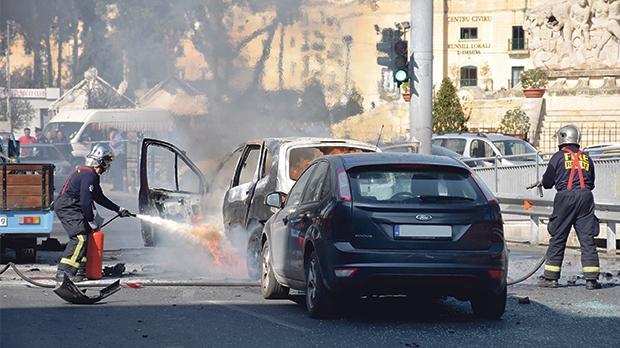 Firemen put out the flames from Mr Bone's car.

He recounted how he saw police responders scrambling to assist Mr Bone to get him away from his burning car. Moments later, other officers were interested in a blue car further down the main road.

Witnesses told this newspaper that officers said they may have found something of interest inside the car but would not elaborate. Mr Bone, who has connections to the criminal underworld and a long history of court dealings, was the second car bomb victim this year.

On January 29, a 65-year-old man from Ħamrun was killed by an explosion that went off as he was driving past Maltapost headquarters in Marsa. There were another three car bombs last year.