The car bomb that killed a businessman in St Paul’s Bay last Monday was made differently and was of a different composition to an earlier one, in September, that severed the legs of a van driver, police sources have told The Sunday Times of Malta.

This has led investigators to conclude that the two bomb incidents were not linked, although they are not ruling out a “foreign element” in both explosions.

The blast on Monday morning claimed the life of John Camilleri, known as Giovann tas-Sapun. It was one of the most powerful car bombs seen in recent years and clearly intended to kill, investigators have said. The car’s top was blown off and ended up on the terrace of a penthouse.

The sources said investigators had collected CCTV footage from shops in St Paul’s Bay to try and track the vehicle’s movements.

This was the third car bomb this year. The first, in January, killed Martin Cachia as he was driving along the Marsascala bypass.

And last month, both of Josef Cassar’s legs were amputated after a bomb shattered his van on Aldo Moro Road in Marsa. 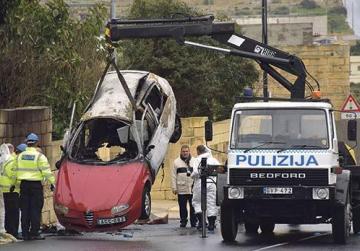 Martin Cachia, 56, was killed in January when a bomb went off inside the Alfa Romeo he was driving along the Marsascala bypass. Police have ruled out that he was in fact the target. Photo: Mark Zammit Cordina

Investigators in the first case believe Mr Cachia, 56, was not actually the target of the bomb, as the force of the explosion indicated it was he who was transporting the device inside his red Alfa. He was killed instantly.

He had been involved in a number of court cases, including on drugs, contraband cigarettes and human smuggling. He was out on bail, and the police said he had not reported receiving any threats except for an apparent arson attack on his son’s residence in 2015.

September’s car bomb was laden with screws and ball bearings. It later emerged that the device had been planted underneath the van and was detonated by mobile phone. 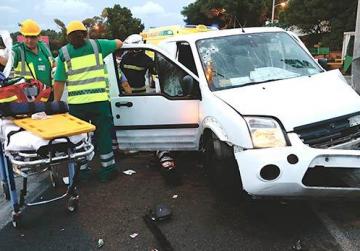 Josef Cassar, a 35-year-old businessman, lost both legs when a bomb planted underneath his van was detonated by a mobile phone. Photo: Darrin Zammit Lupi

Mr Cassar, 35, who is the sole director of a haulage company based in Marsa, has since been released from hospital.

But the police see little that could link this bomb to the one last Monday that targeted Mr Camilleri – who was involved in a number of companies that dealt in property.

The police are investigating his business dealings, and investigators are looking into telephone calls that he received over the past couple of months in the hope of shedding some light on who could have been behind the attack.

Research by this newspaper showed that one of the companies, Dove Trading Ltd, had €800,000 worth of property up for resale and cash reserves of €2.3 million.

The company made a profit of €2.4 million last year, according to the accounts it filed with the Malta Financial Services Authority.

Dove Trading is, in turn, the sole shareholder of Kings Properties and owns a 55 per cent stake in Laguna Cruises.

Mr Camilleri had a legal dispute with the heirs of his brother, Edgar, over the dissolution of the shareholding in Soap & Sponge Ltd – the source of the name tas-Sapun – a bathroom supplier.

The brothers had been the sole shareholders of the company before they split. Edgar died in February 2005, but in a judicial protest filed two years later, Soap & Sponge called on his heirs to liquidate their shareholding.

The company also accused Edgar Camilleri of failing to pay bills while he was responsible for its administration.

The protest also claimed that Edgar’s wife, Maria, had hidden a number of documents that belonged to the company.

Soap & Sponge has not yet been struck off the MFSA’s registry of companies, despite failing to submit any returns since 2001, when the brothers split.

Mr Camilleri’s other interest is in Solair Developments, which runs the Solair Holiday Complex in St Paul’s Bay, not far from where the car bomb was detonated.