The National Audit Office could not establish the nature of a number of expenses claimed by Economy Minister Chris Cardona on his return from trips abroad, as according to his officials, receipts and other important documents had gone missing. 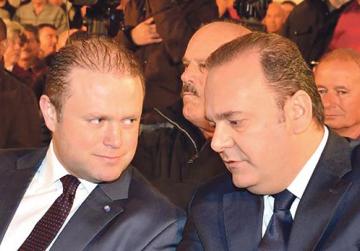 Chris Cardona (right, with the Prime Minister) claimed €2,003 in extra charges on his €8,000 hotel invoice after his visit to Monaco.

This emerged from an audit exercise by the NAO on a sample of government missions abroad done by Mr Cardona in 2015.

Last week The Sunday Times of Malta revealed that on many occasions, Mr Cardona travelled to conduct ‘business meetings’ alone, which is against protocol. It has now discovered that not all the expenses he claimed – and got paid for from taxpayer money – could be verified.

The NAO focused particularly on two missions, during which Mr Cardona was not accompanied by any official from the government or his private secretariat.

Since he only presented the last page of the invoice, the NAO asked him to forward the whole document as it wanted to determine the extras he had been charged – his accommodation for the three-night stay, at €2,666 a night, breakfast included, had already been paid for prior to his arrival.

However, despite its efforts, the NAO could not identify these claimed expenses.

“Since the accommodation charge was paid by Telegrafioc Transfer on May 14, the complete invoice was requested by the NAO in order to verify the nature of these additional charges,” the report states.

“However, the Economy Ministry stated that the full documentation was not available and was ‘probably misplaced’”.

The NAO also found that the form on the return of expenses – a government procedure to be followed after every ministerial delegation visit – “also failed to include the accommodation expenses of €8,000” for the Monaco trip. “The post-travel submission form for the Monaco trip was not traced to file. When queried on the matter, the Economy Ministry stated the form had been compiled but was only filed at the time of audit. The Ministry failed to produce a copy of the form when requested by the NAO.”

Auditing another solo mission abroad by Mr Cardona, this time to the Ukraine between Friday, June 19, to Wednesday, June 24, 2015, weekend included, the NAO also discovered irregularities. “The accommodation expenses equivalent to €1,190 were included under both ‘Hotel Bill’ and ‘Other receipts’. As a result of this error, the travelling officer (Minster Cardona) was refunded €327, when he should have reimbursed the Ministry €863,” the NAO said.

The NAO also highlighted the fact that “the air tickets for this trip had already been purchased three days before the Permanent Secretary’s approval”. The auditors also discovered that some “personal purchases” made by the minister were paid out of the money given for official use.

“Included with supporting documentation for expenditure claimed as ‘Other receipts’, in the Statement of Expenses for the Ukraine trip, was a receipt for the purchase of personal items. It follows that these items, worth the equivalent of €296, were paid out of the contingency money granted to the travelling officer,” the NAO reports.

It also commented on its discovery that unlike normal practice, Mr Cardona was not being given his travel advances through credit transfers but directly in cash. According to the NAO’s audit, the ministry confirmed that advances in cash were only made to the minister, while other travelling officers, when there were any, received theirs by means of a credit transfer.

Mr Cardona has so far declined to give details of his many ‘solo’ travels abroad, which saw him conduct ‘business meetings’ during numerous short visits to Russia, the Ukraine, Monaco, Warsaw, Budapest and Dubai among others. Asked by The Sunday Times of Malta to list the meetings held, with whom and why he had travelled alone, he failed to reply.

Prime Minster Joseph Muscat has not yet commented on his deputy leader’s numerous solo travels on government business.

According to Cabinet rules, ministers have to be given the Prime Minister’s green light prior to every visit abroad.

• Paid €2,666 a night for a three-night stay in Monaco but a further claim of €2,003 on the hotel invoice could not be identified.

• Refunded €327 when he should have reimbursed the ministry €863 on a Ukraine trip.

• Personal items worth €296 were paid out of ‘contingency money’ for the Ukraine trip.

Questions to the Prime Minster

• Did the Prime Minister give his permission to each and every one of these missions abroad according to clause 5.8 of the Cabinet’s manual of procedure?

• Does he confirm that procedures according to clause 5.8 were always followed by Minister Cardona?

• Was a report for each and every one of these missions submitted by the minister according to the same clause? Can we have a copy of these reports?

• Is it fine for the Prime Minister that his ministers travel to conduct business meetings abroad alone and with no other official accompanying them?