Flash floods carried away cars, collapsed walls and trapped motorists in their submerged vehicles after a month’s worth of rain fell in a matter of hours on Thursday.

Police and army units were deployed as roads turned into rivers, leading to multiple water rescues and road closures throughout the day.

An overwhelmed Civil Protection Department appealed for people to avoid valleys and areas close to the sea. There were no reports of fatalities.

But two of their own officers had to be rescued by an Armed Forces of Malta helicopter as they got into difficulty rescuing an elderly man trapped in his car in Burmarrad. All three were airlifted to safety.

In another dramatic scene, a family of four was stranded on the roof of their taxi in Salina as the water rose around them. Eventually they had to use a rope to wade across to safety. 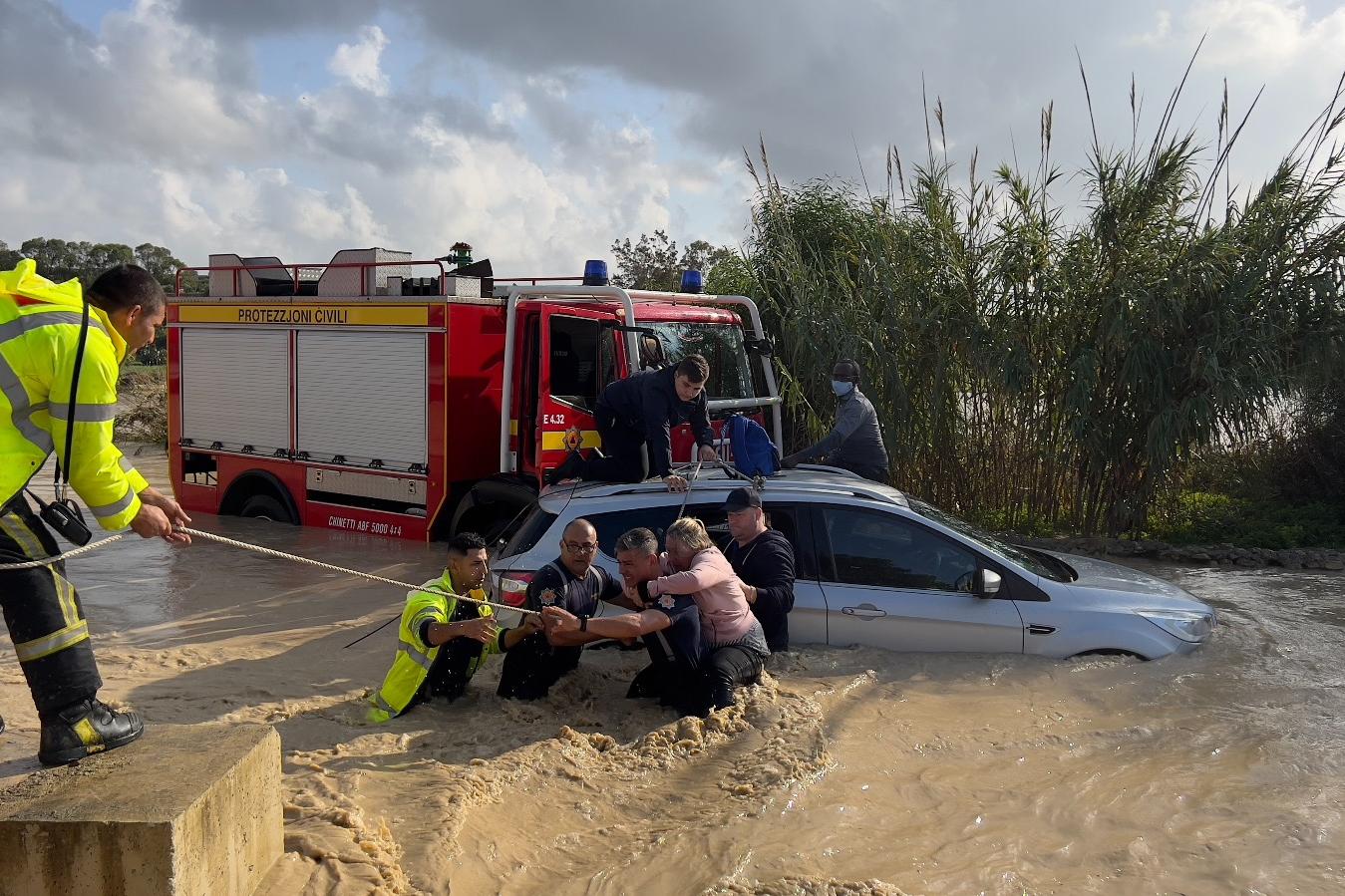 A woman is carried on the back of a Civil Protection Department officer in a rescue in Salina. Photo: Jonathan Borg

“Reports indicate that this is one of the worst storms we have had in a long time,” said the CPD, who doubled its officers on duty to cope with “the influx of calls for assistance”.

Initially the CPD focussed its entire operation on rescue work, but by Thursday evening, a clean-up operation began and it started responding to non-urgent calls. 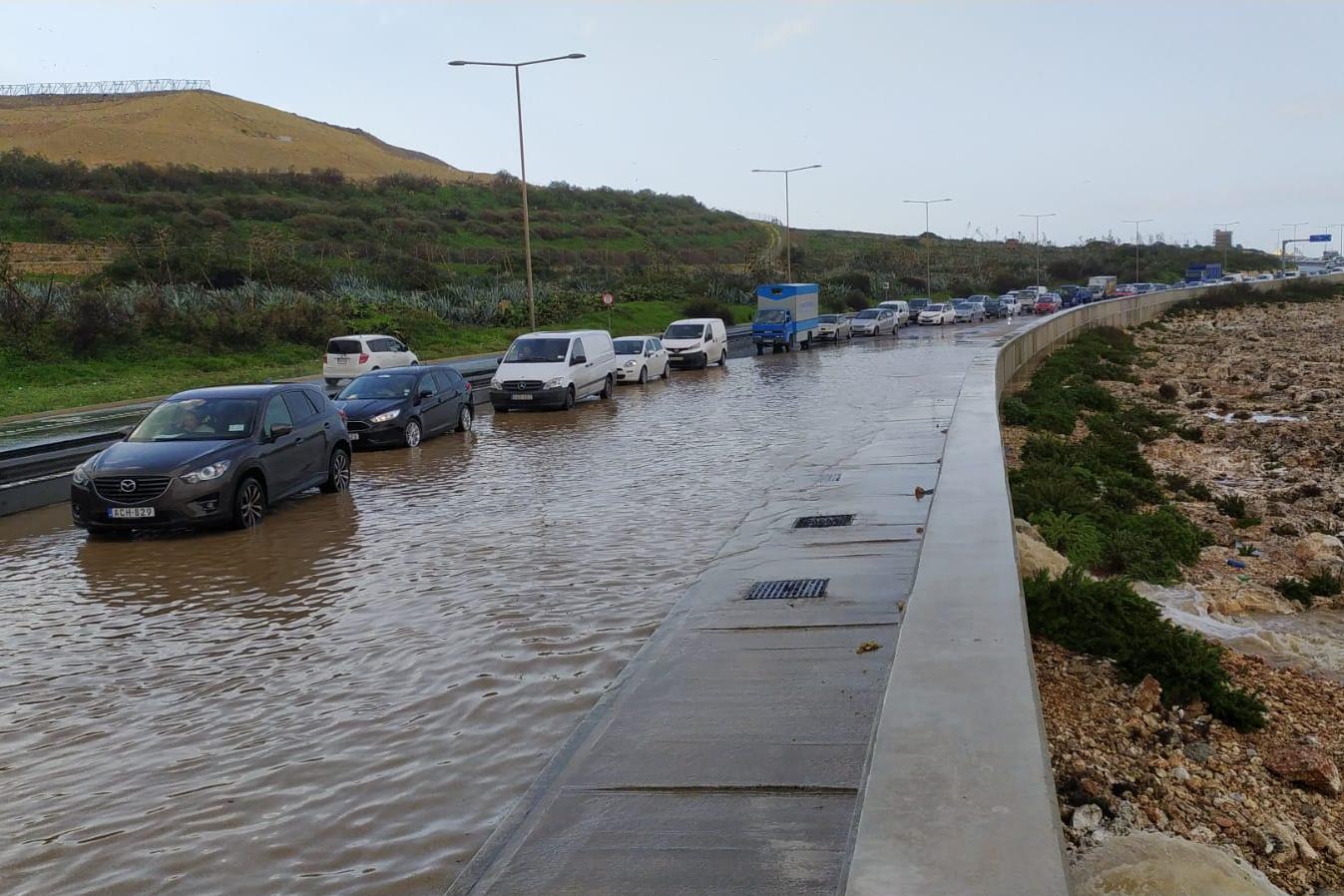 The Met Office issued an amber weather warning in the morning and revealed that an average of 74.6mm of rain fell, with one weather station in Selmun measuring 107.6mm in 24 hours.

That's above the norm for the entire month of November, when an average rainfall of 90mm is recorded.

Videos and pictures from across the island showed dozens of partially submerged cars while bollards, scooters and other debris were washed away in the floods.

Police said they received a report of people in a car carried away by floodwaters in Żebbiegh, two reports were received form Burmarrad of a motorcycle and a car swept away with their drivers.

Animal Welfare Commissioner Alison Bezzina was among those trapped in their vehicles by the rainfall and described how she spent two and a half hours in Birkirkara waiting for a tow truck.

Despite the chaos, she said it had “also served to restore my faith in humanity” as delivery drivers and nearby residents offered her help and cups of tea before police arrived.

The water also inundated homes with people reporting leaks seeping through walls and under doors.

Several roads were closed including part of the Coast Road, after a wall collapsed and witnesses described seeing cars floating in the area.

The roads between St Microelectronics and the airport tunnels in Kirkop, and near Casa Arkati in Mosta were closed as cars stalled because of the floodwaters.

Part of the Coast Road was shut because of flooding and the collapse of a wall. Witnesses said they saw cars "floating" on the Coast Road around 11.30am.

A traffic lane was also closed on the Żebbuġ to Attard road because a rubble wall collapsed. Buqana Road between Rabat and Mosta turned into a river and was closed.

Heavy flooding was also reported in Msida, The Strand in Gżira and the bottom of T'Alla w'Ommu Hill in Naxxar.

In Gozo, parts of the Nadur football pitch collapsed during the heavy rainfall.

The chaos subsided late in the morning when the rain stopped. 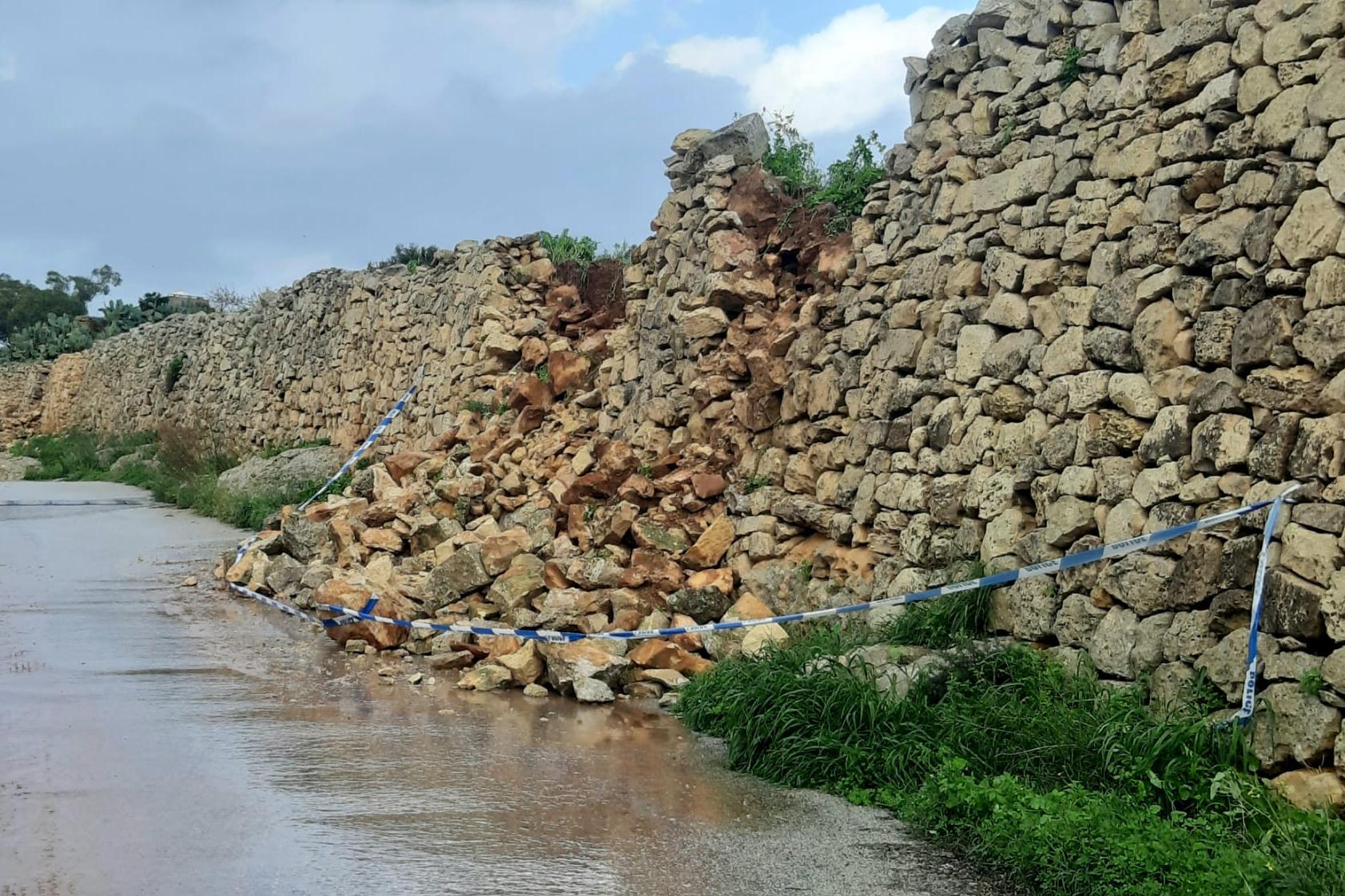 It is the latest period of unusual weather to hit the country. October was the wettest in 64 years and the third wettest on record while June saw the longest heatwave in living memory.

The Met Office said Friday’s bad weather was caused by a trough of low pressure extending from Algeria towards the Central Mediterranean.

The scene in St Paul's Bay. Note the manhole lifted off its place.

It led to instability in the south that formed a thundery area moving northwards.

While the wet weather is not expected to persist, wind is forecast to pick up on Friday, reaching gale force by Monday. 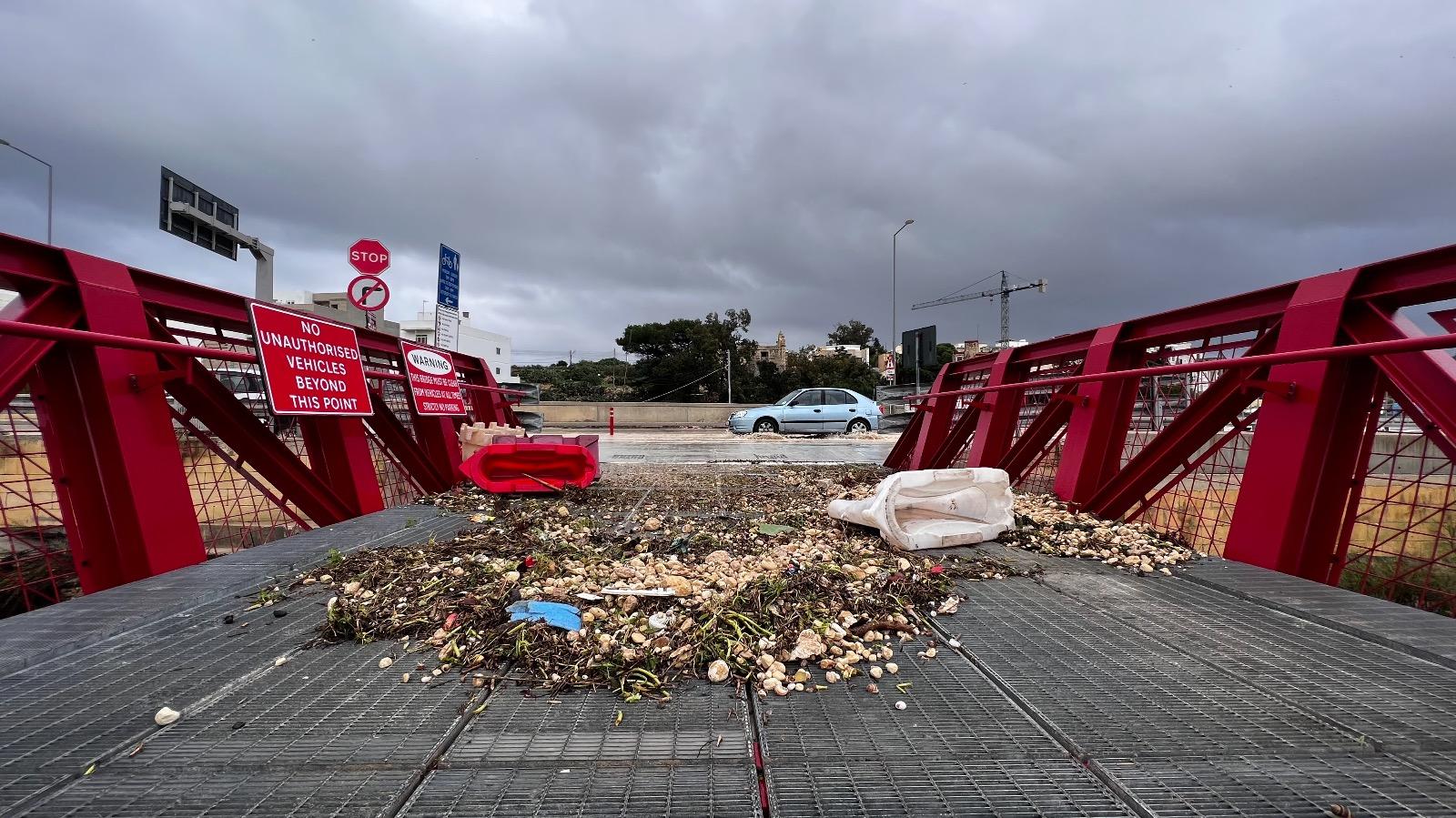 Plastic traffic barriers floating with the stormwater on the Mrieħel bypass. 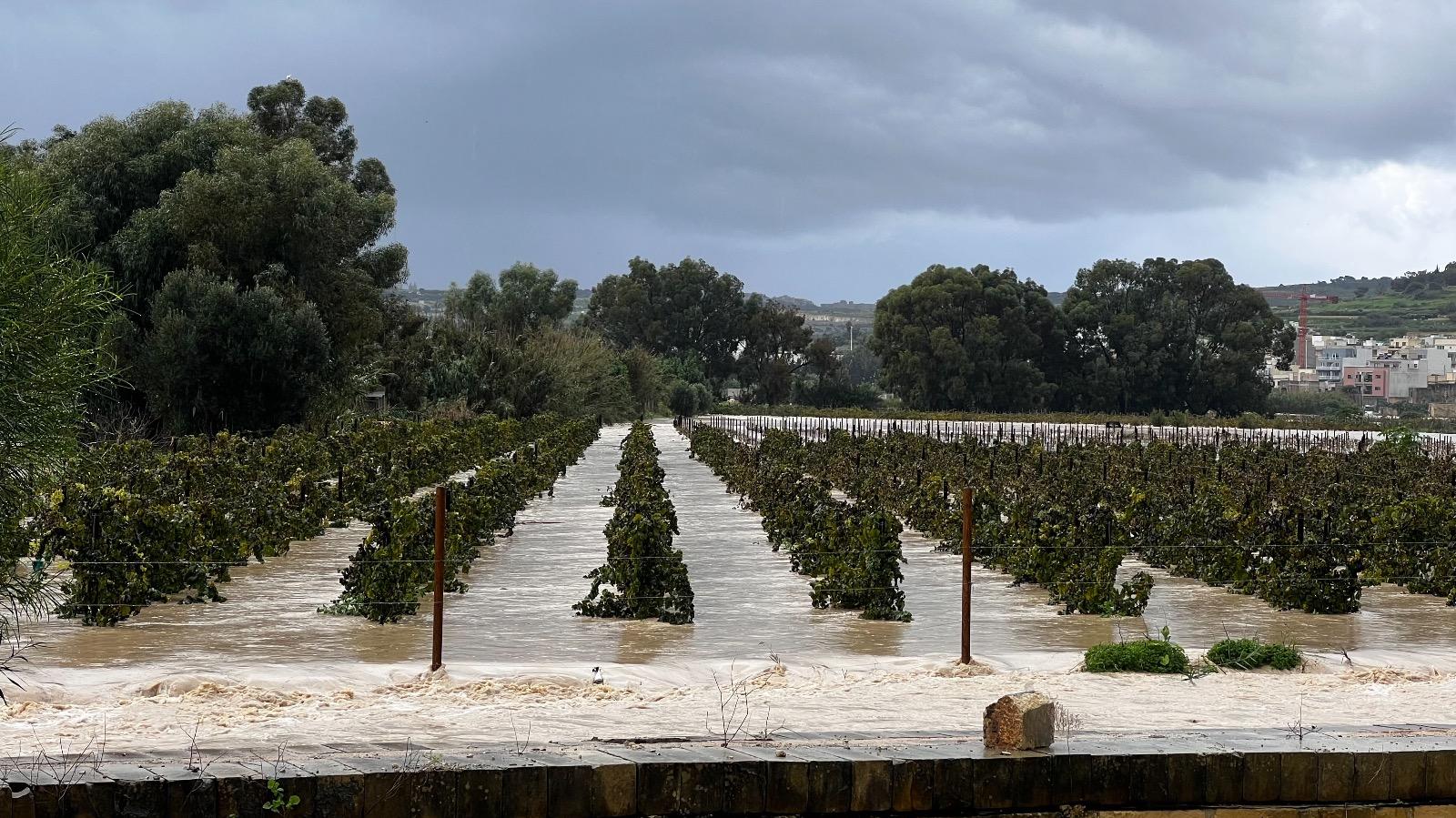