Can people laugh during the depressing, fear-filled times brought about by a health crisis? Ġorġ Mallia meets up with fellow cartoonists Steve Bonello, Mikiel Galea, Seb Tanti Burlò and Pepito to discuss the role played by satirical cartoonists in a pandemic-depressed society.

When society faces a crisis brought about by something as unprecedented as a global pandemic, survival becomes the most essential aim of life. Humour is probably low on the list of priorities in people’s minds at this time... but humour can act as a defuser of stress. Satirical humour can also highlight society’s response to the situation, and that is where cartoonists come in.

A single panel, satirical cartoon encapsulates a moment in time that has both an accepted lead-up to it and an inferred continuation. That is, the cartoonist presumes that people know what is being talked about, and the point made is usually an instigator: of laughter, of ridicule, of thought and sometimes a lot more.

The question posed in ‘The power of newspaper cartoons during a public health crisis’, published in The Economist, is “in depicting disease, cartoonists face a particular challenge: how do you render something as imperceptible as a virus in a single frame, where there is little room for nuance or context?”

Malta has a thriving cartoonist community. Most newspapers now have a resident cartoonist, though cartoons also thrive on social media. The reach that social media has is enormous, and cartoons there also instigate discussion.

I have sought out four of my fellow cartoonists and asked them how humour can come out of a situation that is so depressing.

Mikiel Galea, cartoonist for Malta Today, for example, finds lots of humour in it, because the situation has engulfed everyone’s conversation and thoughts, as it would in the midst of election fever, and this allows for plenty of ideas for comical material. Although he questions whether readers would actually take a joke about something they would deem grievous and life-threatening. 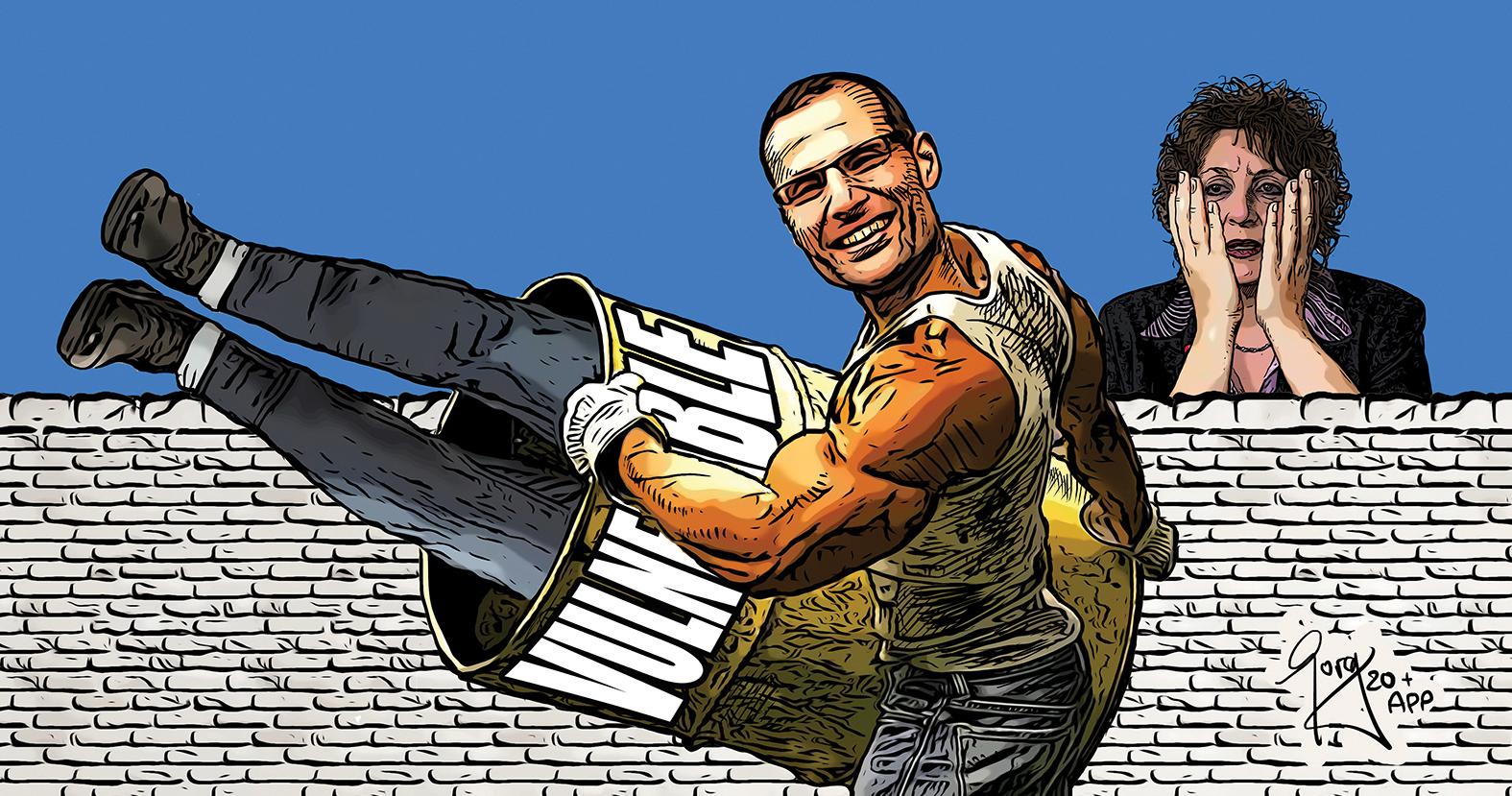 ‘Bob the trashman’ by Ġorġ Mallia. Published on Facebook.

The Sunday Times of Malta’s own Steve Bonello, however, is more direct: “I always think that when and if we stop laughing, we die.” He believes that every situation, no matter how tragic or morbid, has its funny side, and that’s what he tries to explore.

The Times of Malta’s cartoonist Seb Tanti Burlò does not think the situation is more depressing than it already was before, with all the negatives in Maltese politics and society, not least the prevailing inequality, corruption, and what he describes as “a revelry in ignorance”.

“Humour, in my case, comes out in fits and spurts, more like my splatters of ink on paper. It’s a form of catharsis.”

He says that we all like to laugh. “Humour,” he says, “is hard-wired into the human condition.”

Pepito, The Malta Independent’s cartoonist, thinks that “humour is the key to getting through any situation,” adding that “it is a classic partner in crime with satire, which often underscores the lighter side of things and exaggerates it for effect.” Art, he says, provides solace, and satire uses humour to make us look at ourselves and laugh.

In fact, Bonello thinks that the press cartoonist “should be more of an opinion maker than simply the one who is there to provide a laugh”, with Pepito adding that cartoonists use satire to make readers reflect and think about current affairs, saying that he pushes the envelope whenever possible to see how far he can go. “Sometimes it works, others it doesn’t, and lessons are learnt.”

Galea is a bit more pragmatic about cartoonists’ work. 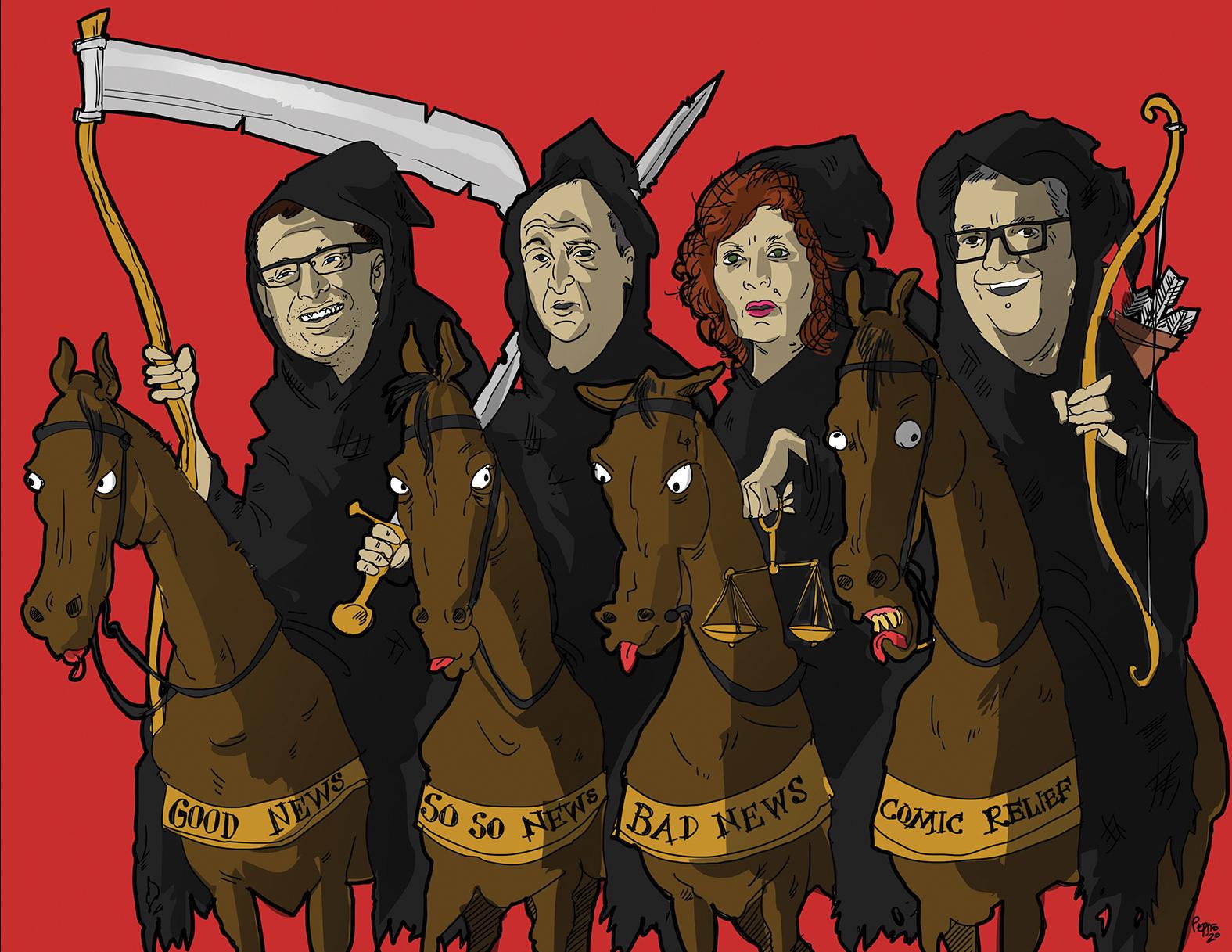 ‘The Four Horses of the Covid Apocalypse’ by Pepito. Published in The Malta Independent and published here with permission.

“It depends on the cartoonist’s view and the editorial policy of the newspaper,” conveying these views and comments “through producing an image which is absorbed quickly, at a glance, and hopefully imprinted in the memory of the reader for a longer period” than an article would.

The cartoon needs to have the force of a blunt instrument

“The cartoonist’s skill and wit are paramount in this. And what works against cartoonists are political correctness and the fear of being libelled, which at times result in ‘wishy-washy’ humour. “You need humour that punches below the belt.” But Galea thinks we are too sensitive a nation for that to be the norm.

Tanti Burlò is very unequivocal about this. The role of the cartoonist in society, he thinks, is “to lampoon bullies and to speak truth to people”.

And to this I would add that the cartoonist also often puts into direct, brutal visuals what a lot of people are thinking, but either do not have the skills to visualise... or are afraid to. The cartoon needs to have the force of a blunt instrument. 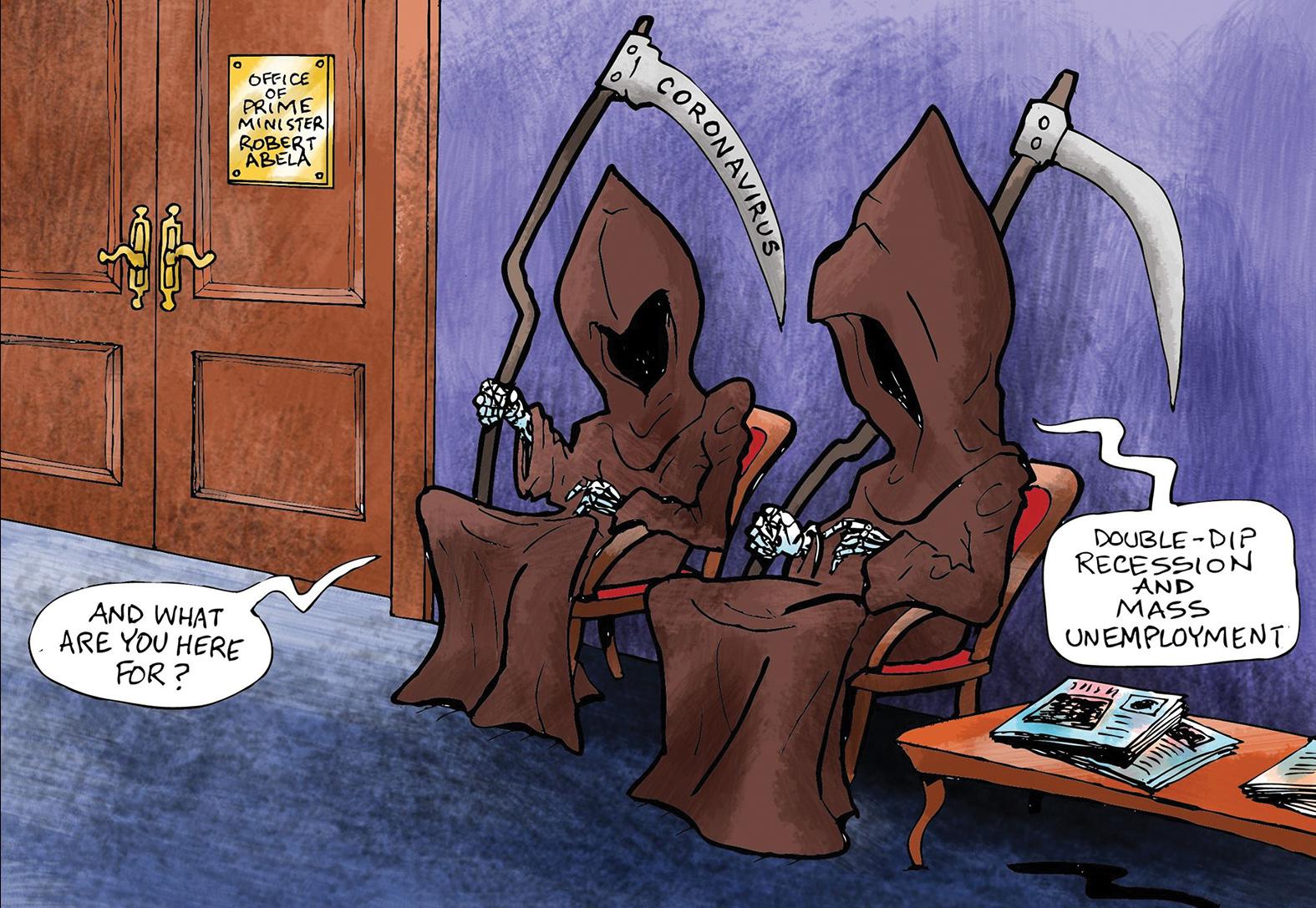 ‘And what are you here for?’ by Mikiel Galea. Published in Malta Today and published here with permission.

Bonello uses various techni­ques. He had become used to producing his cartoons digitally, but (and he could not help but put a dig in) “way back in November when Konrad Mizzi resigned and we were regaled with hours-long power cuts that resulted in damage to my PC – it forced me to work in pen and ink on a newspaper cartoon for the first time in ages. I loved the hands-on experience so much that I am now doing most Islanders cartoons like that.”

Galea thinks his style looks somewhat like kids’ cartoons, adding the snide remark that “that’s what seems to work best over here”. Ouch!

Pepito describes his style as moderately descriptive, yet (ironi­cally, for a cartoonist) “kind to my subjects”. He steers away from exaggerating physiological shortcomings that are often the meat to caricaturists. “The joke is always about the argument and rarely on anything else.”

Tanti Burlò describes his style as “hungover. It lets me get away with a lot of shoddy line work.” 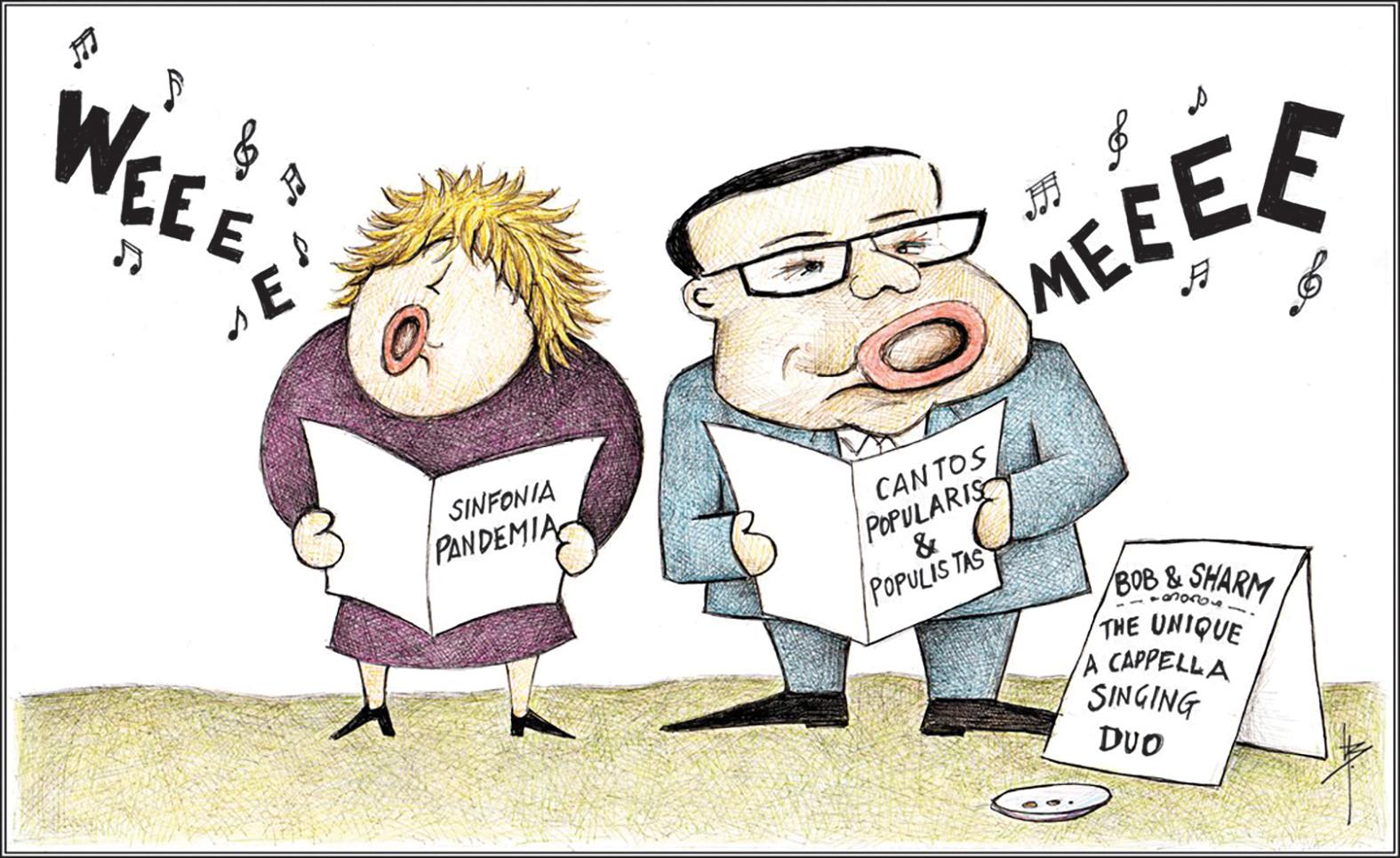 ‘We/Me’ by Steve Bonello. Published in The Sunday Times of Malta.

Styles vary significantly of course, and even within the same cartoonist’s output. Bonello’s digi­tal and hand-drawn cartoons are very different, with cross-hatching used in the latter and filled in flat colours in the first.

My own cartooning style depends heavily on the subject matter. I hand draw, I draw digi­tally using a variety of tablets, and I even use a cartooning app at times that creates the base over which I then draw and colour.

An example of this last technique is in my cartoon appearing with this article about the Prime Minister’s decision to ease lockdown. The visual references are all there. The implication that he thinks with his bulging muscles. The trash can. And the superintendent of public health behind a wall.

Pepito’s cartoon comments on how the government is delivering news throughout the pandemic: “This shows,” says Pepito, “that even in the middle of the country’s most serious crisis since the Second World War, politics and public relations still play a prominent role.” The role given to the leader of the opposition relegates him to insignificance.

Tanti Burlò is uncertain as to whether the cartoon reproduced here is actually funny: “Is it considered humorous, to depict a fat, sun-burnt couple taking a selfie in a sea full of the skulls of asylum seekers who drowned trying to get to safety? I couldn’t say.”

Humour can be very, very dark in cartoons, and in fact often is.

We see this quite clearly in Galea’s cartoon, in which not just the pandemic, but also its serious repercussions are personified as deadly; a brilliant example of how a cartoon can visually encapsulate and concretise abstract concepts.

Though there is nothing abstract about the clear-cut distinction between the care for the collective and the egotistical in Bonello’s cartoon.

And there you have it: Blunt, direct and going for the jugular.

Through savage humour, satire draws very clear and outright attention to faults being depicted, and if many of us laugh out loud in the process, then the effort is worth it, even when all around us there is very very little to laugh about.