Claire Caruana spoke to the La Repubblica journalist behind a new movie about Daphne Caruana Galizia, which is going to be screened in Malta later this month after its premiere at a journalism festival in Italy on Friday. 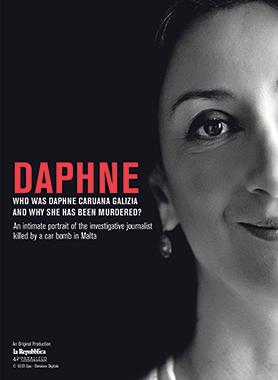 The poster of the movie: A look at the life, work and murder of the journalist.

A documentary about the life and work of Daphne Caruana Galizia by La Repubblica journalist Carlo Bonini is the first in a series of works on the slain journalist.

Speaking to The Sunday Times of Malta ahead of Friday’s premiere of Daphne at the International Journalism Festival in Perugia, the Italian newspaper journalist said Ms Caruana Galizia’s murder and the reasons behind it went “far beyond the small island of Malta”.

“Daphne’s story, the way she was killed and the reason why she was killed are things that have a meaning for all of us, as journalists and as European citizens. It’s something that goes far beyond the small island of Malta. Daphne is a European issue,” Mr Bonini said.

The documentary, in English, will be screened in Malta on April 21. It examines various aspects of Ms Caruana Galizia’s life, starting off by offering audiences a glimpse into her private life.

“The film, in 52 minutes, tries to shed light on three main things. We thought that Daphne deserved to be humanised once again. One of the things that struck us the most was that she was basically dehumanised, especially in the last few months of her life.

“We wanted to also have a look at her life as a woman and as a mother,” Mr Bonini explained.

This, he went on, would be useful for audiences abroad and those who might not know as much about Ms Caruana Galizia as the people of Malta.

The filmmakers also attempt to put forward possible motives behind the murder by taking an in-depth look into some of the major issues that Ms Caruana Galizia had been investigating before she was killed.

“If you want to search for the instigators you have to talk and think about reasonable motives for which she had to be silenced,” Mr Bonini said, noting that the team behind the film also spoke to different people in Malta to better understand these issues.

If somebody thought that killing her was a way to shut down the light, it’s the biggest mistake they made

A request for an interview with Prime Minister Joseph Muscat was made but was turned down. According to the Italian journalist, the Prime Minister’s office informed the team that there was nothing to add to what had already been publicly stated about the matter.

Dr Muscat last gave an in-depth interview to international media in January, appearing in a feature about Ms Caruana Galizia’s murder on the BBC’s Newsnight. He has failed to respond to several requests for an interview by this newspaper and others.

The documentary also examines the execution of the bombing itself, with the filmmakers sifting through information that has emerged from the testimonies of those taking the witness stand during the compilation of evidence against the three men facing charges of murdering Ms Caruana Galizia.

While the film is aimed at offering a “sharp overview” of what has happened, Mr Bonini insisted that investigations by journalists from all over Europe, including himself, would carry on.

“Besides the movie, we will keep writing and working on that. We decided that the movie had to be a sort of closed piece of work that can be watched over and over and would still be relevant,” he said. 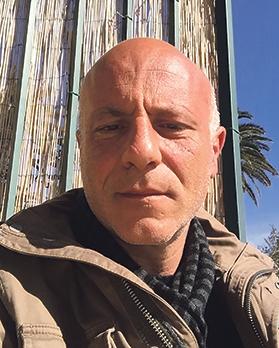 Journalist Carlo Bonini: He will be in Malta for a movie screening and discussion on April 21.

Asked what had made the deepest impression on him, Mr Bonini said he realised from interviews conducted for the documentary that Ms Caruana Galizia’s work had an impact even when she asked “simple questions”.

The documentary, he repeated, was “just the beginning”: he would continue digging into the issues that were exposed by the murdered journalist.

“What makes me comfortable and convinced of the work we decided to do with Daphne’s story is that if somebody thought that killing her was a way to shut down the light, it’s the biggest mistake they made. Killing her was just a way to make the light shine brighter.”

Mr Bonini will be part of a panel discussion, organised by blogger Manuel Delia, to be held after the first screening of Daphne taking place on April 21 at the Sir Temi Zammit Hall at the University of Malta.

US award for Daphne Caruana Galizia

The American Society of Journalists and Authors (ASJA) has announced that it is awarding its Conscience in Media Award to Daphne Caruana Galizia, the latest in a series of posthumous awards to the journalist assassinated last year.

The award has been presented only 12 times since 1975.

The award will be presented on May 18 at the Sheraton Times Square in New York during the ASJA’s annual conference.

The award calls attention to the increasingly dangerous profession of investigative journalism. More than 700 journalists have been killed over the past decade, according to Reporters without Borders (RSF).

Founded in 1948, ASJA is the US’s professional organisation of independent non-fiction writers.