Lawyers for Fenech, who stands accused of conspiracy in the assassination of the journalist, filed an application in the criminal courts over Azzopardi’s behaviour.

The application requests that the criminal court addresses a number of social media posts by Azzopardi which Fenech feels are prejudicing his right to the presumption of innocence.

In one instance, Azzopardi shared a post by the late journalist’s son Matthew Caruana Galizia, which Fenech claims makes it appear as though he has already been found guilty of his mother’s assassination.

The post shared earlier this week reads: “Would Yorgen Fenech have been able to push the government into giving Electrogas €40 million for free, in November 2017, if my mother had exposed him as the owner of 17 Black? No. So he murdered my mother in October 2017. And there are those who want to give the animal an amnesty.” 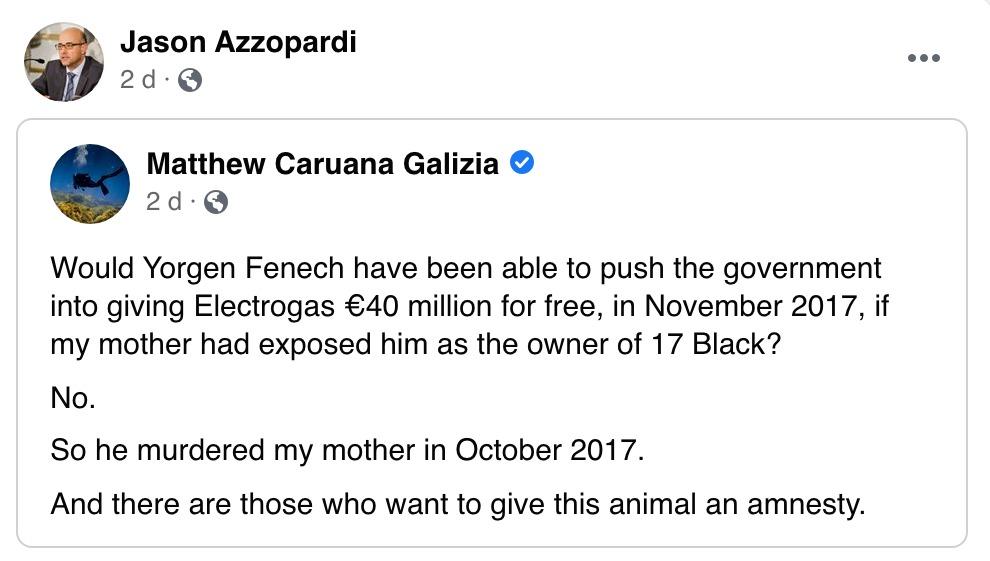 Fenech says this post is among a number that have been written or shared by Azzopardi and are influencing the thoughts of the public, including those that are yet to judge him.

Azzopardi is the opposition shadow minister for justice and is also representing the Caruana Galizia family as parte civile lawyer in the case against the late journalist’s alleged assassins.

Fenech’s application accuses Azzopardi of a conflict of interest because he is both a politician and a lawyer involved in the high-profile case.

Fenech also argues that Azzopardi’s role in the case is in line with the prosecution, and that he appears to be privy to evidence yet to be presented in court.

Azzopardi told Times of Malta that he stood by all his comments but added that he had not yet been served with any notice by the courts.