In a newly released mission report based on a September visit to Malta by MEPs, Mr Cutajar said the police were working closely with Europol, in particular for technical expertise.

Ms Caruana Galizia was assassinated by a car bomb in October 2017.

The Commissioner expressed his confidence that the murder investigation would lead to results.

He said every step taken by the police had been done under the supervision of the magistrate leading the inquiry.

The police had an entire section working on the case, and Europol had access to all the findings, he continued.

Being mentioned in slain journalist Daphne Caruana Galizia’s blog was not enough to haul people in for a police interview, the Commissioner said.

MEPs concluded in the mission report that insufficient information was provided by the authorities to verify the progress of the ongoing murder investigation.

The mission report sheds new light on passport sale concessionaires Henley & Partners relationship with the Prime Minister’s chief of staff, who is being investigated for taking an alleged €100,000 kickback on passport sales.

Representatives from Henley & Partners told MEPs that Mr Schembri was their “main contact” within the Prime Minister’s office.

The passport sale concessionaires said they had no contractual agreement with Mr Schembri personally.

Henley & Partners told MEPs that they had not noticed anything in their dealings with the government that was not in respect of the rule of law.

A Henley & Partners representative acknowledged that the company had written to the Prime Minister about potential libel action against Ms Caruana Galizia.

Henley & Partners said the familiar tone of the e-mail communication between company chairman Chris Kalin and the Prime Minister was nothing unusual, as the use of first names was “very common”. 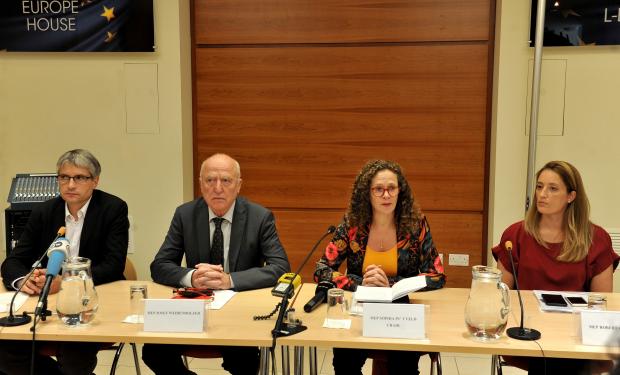 MEPs discuss their visit to Malta back in September. Photo: Chris Sant Fournier

The MEPs also interviewed Chief Justice Joseph Azzopardi, who told the delegation that the Attorney General had “too many powers”, which created a difficult situation for any person holding that office.

Dr Azzopardi said that the Attorney General and the Police Commissioner had the power to initiate an investigation into corruption cases raised in the press.

In his interview with MEPs, the Attorney General said his powers to launch magisterial inquiries had to be based on solid proof and investigative powers were in the hands of the police.

The normal flow therefore was that facts were first gathered by FIAU, then investigated by the police, then transmitted to the Attorney General if reasonable suspicion was established, Dr Grech said.

Dr Grech defended his decision to hand a copy of the Egrant report to the Prime Minister.

According to the report, he justified his decision by saying the case involved the person occupying the highest political post in the country.

The Attorney General said the public interest had been satisfied by the publication of the main Egrant findings.

Dr Muscat had promised in July to publish the entire inquiry, but has yet to deliver on his promise.

MEPs concluded in their report that the immediate publication of the Egrant report was crucial. Only allowing government members to have a copy and publish selected parts continued to undermine confidence in the process, they said.

She called on Malta's institutions to do their duty, and warned that Tourism Minister Konrad Mizzi could not hide forever.