Tributes to Daphne Caruana Galizia laid at the Great Siege Monument by international press freedom NGOs on Sunday were cleared away during the night, a day before the anniversary of the journalist’s murder.

Flowers, candles and messages had been placed at the hoarding surrounding the monument on Sunday by representatives of Reporters without Borders, PEN international, the Committee to Protect Journalists and the European Centre for Press and Media Freedom, who are in Malta to participate in events commemorating the anniversary of the murder.

The site has served as a makeshift memorial to Ms Caruana Galizia since her death on October 16 last year. It was repeatedly cleared away,  and reinstated by activists before the government sealed off the site in September.

Culture minister Owen Bonnici said this was to allow the monument to be restored, and told Times Talk last week: “In this country, everyone must obey the rule of law. The rule of law is not a one-way street. You have every right to express yourself, according to the law. Once an activity ends, everything must be cleared.” 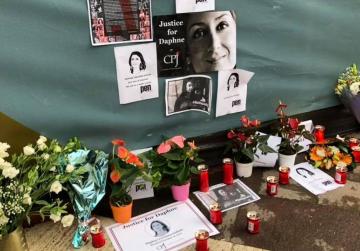 The tributes on Sunday

Activists have pointed out that no work appears to have been carried out on the monument.

On Tuesday, activists will commemorate the anniversary with a silent gathering at the site of the murder in Bidnija, before mass at St Francis Church in Valletta and a protest at 7pm.

Vigils will also be held in other European cities, including London, Brussels and Berlin.

Several international organisations - including those who laid tributes on Sunday and 60 Italian journalists who signed a declaration demanding to know “who killed Daphne” - will also be participating.