Daphne Caruana Galizia was investigating Maltese links to a Libya-Italy diesel smuggling racket in the weeks leading to her death, the Times of Malta has been told.

Sources close to the investigation into last week’s fatal car bombing said yesterday the journalist/blogger had been looking into the involvement of Maltese parties in a fuel-smuggling operation that included Libyan traffickers and Sicilian organised crime.

Her probe, they said, had been going on for some weeks prior to her death and was now being treated as one of the main avenues of investigation, along with other leads.

The Times of Malta reported last week that two men – Darren Debono and Gordon Debono – were wanted in Italy in connection with an investigation into the transportation of fuel exported illegally from the Zawia Libyan refinery and shipped to Europe via ships bunkered off Malta.

Darren Debono was arrested by the Italian authorities in Lampedusa a few days ago. Approximately 80 million kilograms of fuel oil worth in excess of €30 million is believed to have been sold on the black market in 2015 alone. 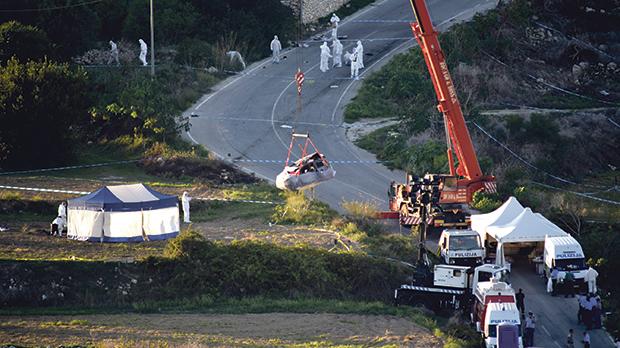 Daphne Caruana Galizia may have been in the process of a fuel smuggling investigation when she was murdered in a car bombing. Photo: Matthew Mirabelli

According to the United Nations, the lucrative racket sees smugglers sell Libya’s domestically subsidised fuel to resellers in Europe at much higher prices.

Carmelo Zuccaro, a Sicilian chief prosecutor investigating the fuel-smuggling leads, said he “could not exclude” the possibility that some of the men targeted in his investigation could be behind Ms Caruana Galizia’s murder.

This is not the first car bombing in Malta that investigators believe could be linked to the smuggling of fuel.

Investigations into a deadly explosion in Marsaxlokk three years ago also led to suspected ties with the smuggling of fuel from Libya to Italy, the sources said.

Investigators working on the 2014 murder of fuel company owner Darren Deg-abriele drafted a shortlist of possible suspects, however the sources pointed out that even if the smuggling theory turned out to be a solid lead, it would still be very difficult to unearth enough information to possibly lead to an arrest.

The sources remarked that the investigations into Ms Caruana Galizia’s murder were not limited to fuel smuggling. “Investigators are following other leads, too, and are casting a wider net than just one avenue,” they said.

The Sunday Times of Malta reported that one such avenue involved an ambiguous blog post on Ms Caruana Galizia’s Running Commentary website in March.

The slain journalist wrote she was working on developing a story about “one shady cigarette man in Cyprus, a few containers of cigarettes that were not where they were supposed to be and cash and bank drafts that moved between Malta and Cyprus around 2008/2009”.

The sources added that organised crime links between Malta and other countries were also being looked into.