The Pauline cult has deep roots in Birkirkara, as evidenced by the presence of a late medieval church dedicated to the Apostle of the Gentiles, situated on the valley floor that connects one side of the village to the area known as l-Imrieħel.

Built at the heart of what must have been a flourishing medieval hamlet, tied to the fertile agricultural land in the area, the medieval church and the cross on the column in front of it survived until the mid-19th century. But the widening of Valley Road, which was to become one of the island’s busiest thoroughfares, made it necessary to dismantle the church.

Artefacts considered of artistic value were preserved and incorporated in the new church, built in 1852 on a neoclassical idiom, on a design by Giuseppe Bonavia. Architectural designs of the façade replicate Giorgio Grognet’s designs for the Rotunda in Mosta. 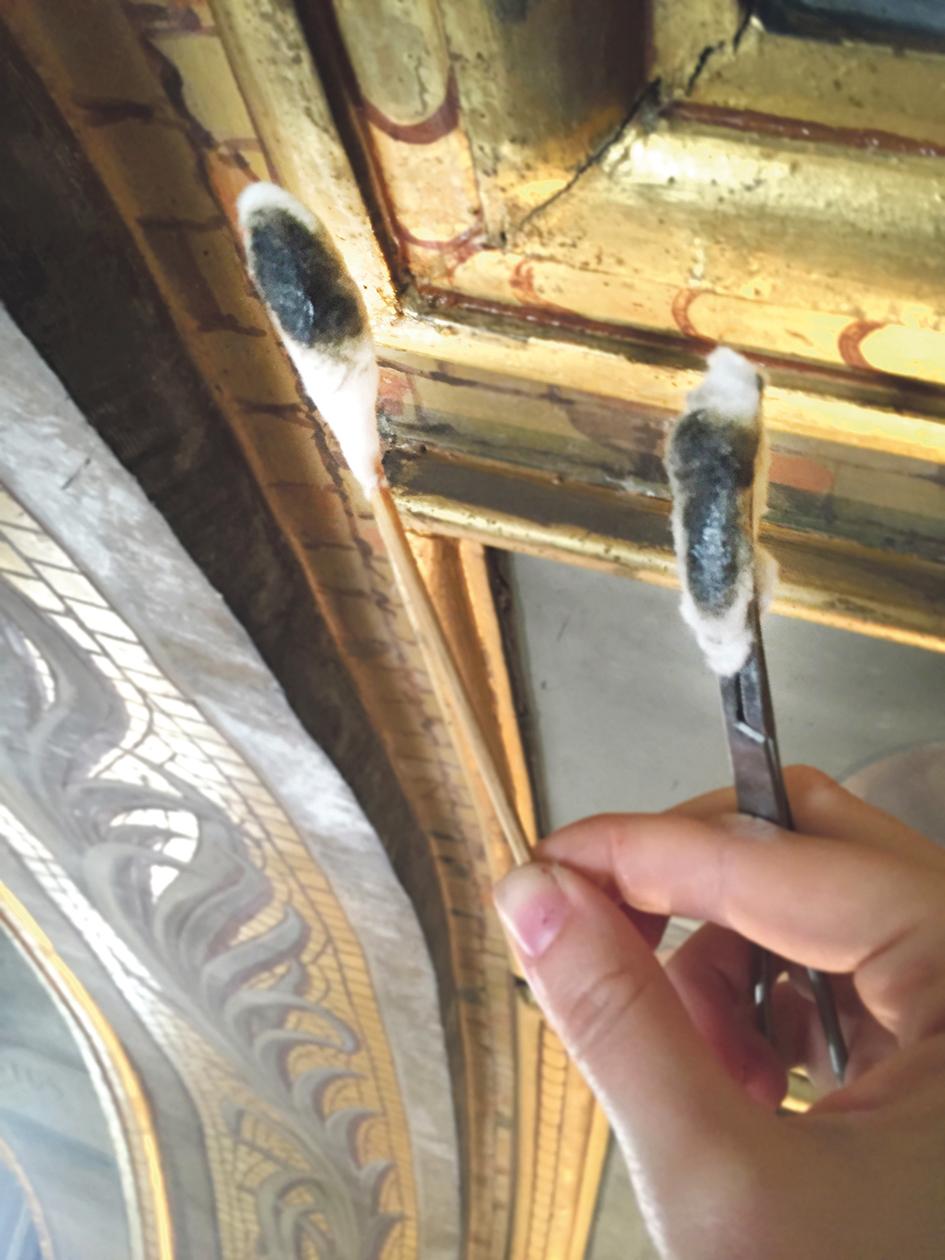 Cotton swabs showing the amount of dirt particles removed after cleaning of a surface.

Considered to be of too simple a form for the baroque tastes of the community, certain architectural elements, including the 18th century columns of the altar of the crucifix, were retrieved from the old parish church of Santa Maria, and installed in the newly-built church of St Paul.

A clock with two faces, one on the façade, and the other on the belfry, is the work of Michelangelo Sapiano, and was installed in 1891. The titular painting, in a Nazarene style, is the work of Giuseppe Calleja, and copies the Conversion of Saint Paul found in the Basilica of St Paul Outside the Walls in Rome.

The community experienced a flourishing period during World War II. This was due to a great influx of refugees from the Grand Harbour area. Valley Road was transformed into an entertainment and commercial hub, and many sought to fulfil their religious duties at this church, which lies right next to  one of Malta’s busiest roads – Valley Road, Birkirkara.

The popularity of the church and its growing community must have encouraged its caretakers to have it fully decorated, a task they naturally entrusted to one of their own. Artist Prof. Giuseppe Briffa, in fact, lived just a few doors up, on the other side of the same street. The iconographic cycle chosen takes its cue from the Acts of the Apostles, and depicts scenes the life of St Paul, specifically during his stay on the island.

Although work started as soon as the war was over, a petition to have it sanctioned by the Giunta Diocesana per la tutela delle Antichita Ecclesiastiche was only presented by Canon Vincenzo Ciappara, rector of the church, on April 14, 1948. The project had already gained the approval of the Provost, Can. Emmanuelle Vella, and the petition was presented to the Curia by Can. Emmanuele Micallef. In the petition, Ciappara states that since a benefector had been found, he was presenting the bozze for the decoration of the rest of the vault. Therefore, it is clear that by then, work on the apse had been completed, for which however, no ‘supplica’ can as yet be traced.

Briffa lived just a few doors up, on the other side of the same street

The committee discussed the request in a meeting held on April 14, during which it was decided to hold an inspection on site. Once this was carried out, and the ‘giunta’ was satisfied with the work as proposed, final permission for the rest of the decoration was granted on April 23.

The decoration work continued with the painting of the bay above the apse, depicting the Martyrdom of St Paul, the glory of St Paul and his Preaching (1948). The central bay depicts St Luke and St Titus, St Aristarchus and St Timothy. In the centre, St Paul is depicted distributing Holy Communion in Malta (1949).

The bay above the main entrance depicts the episcopal ordination of St Publius on the left, St Paul preaching in the centre and the healing of St Publius’s father on the right. Moreover, each of the outer two bays include two pairs of angels on each side; the four individually hold an inscription vividly describing its content. While the central bay consists of on angel on each side of each spandrel also holding an inscription.

Eleven paintings depicting the apostles are present on the façade of the organ balcony; these were the last to be painted, concluding the cycle in 1968. 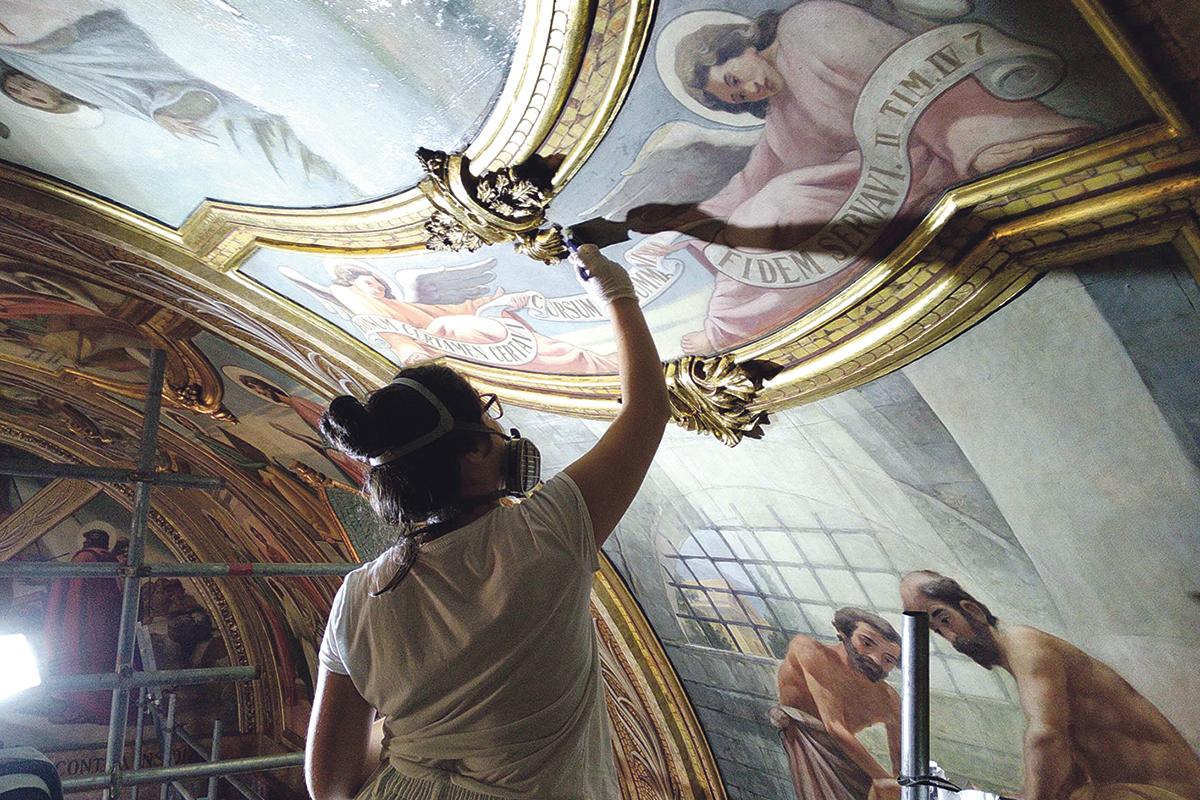 A protective coating was applied on the marouflage painted surface. 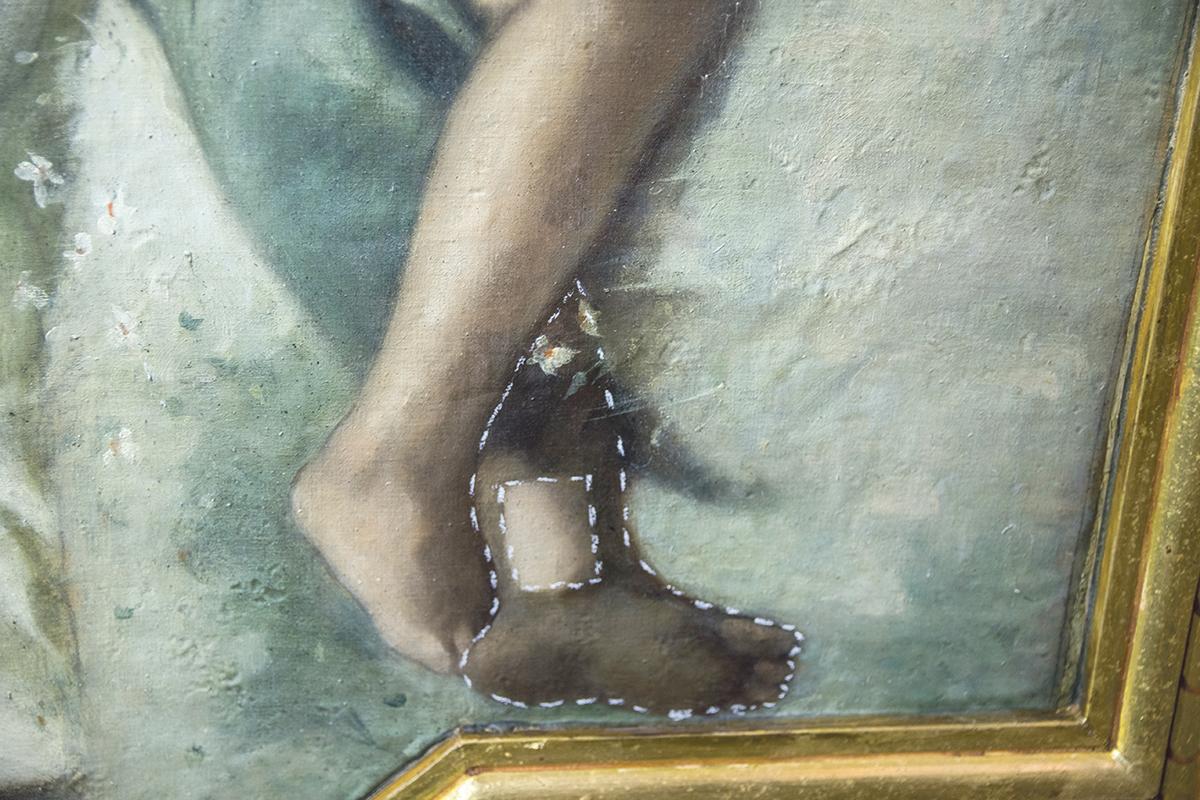 The original skin tone was revealed on removal of the dark deposits of dirt. 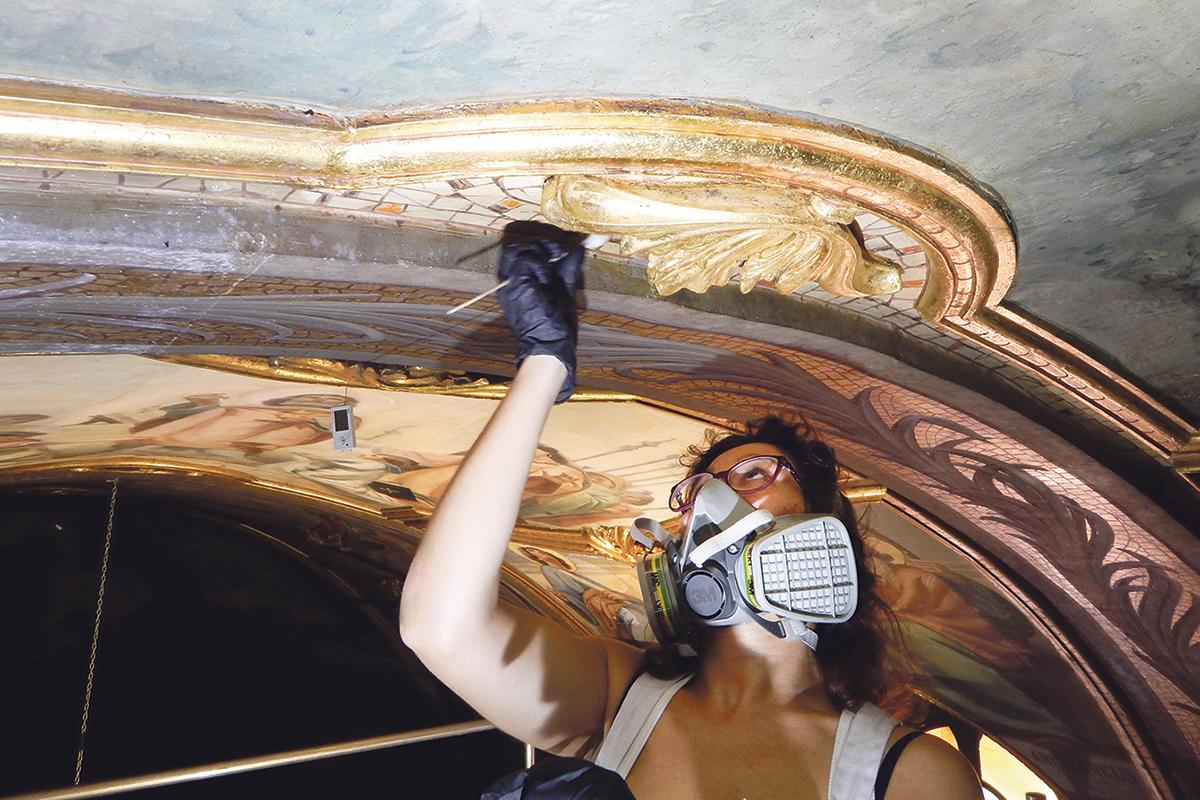 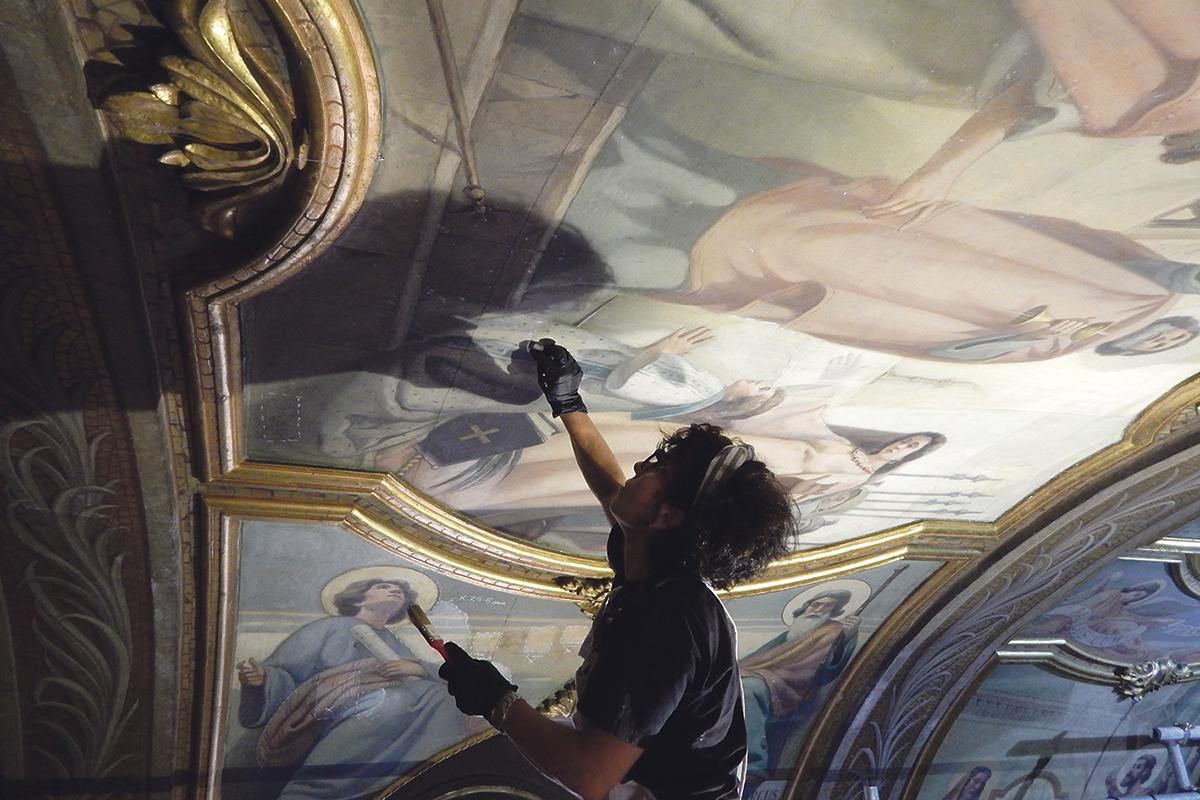 Cleaning of the marouflage paintings. 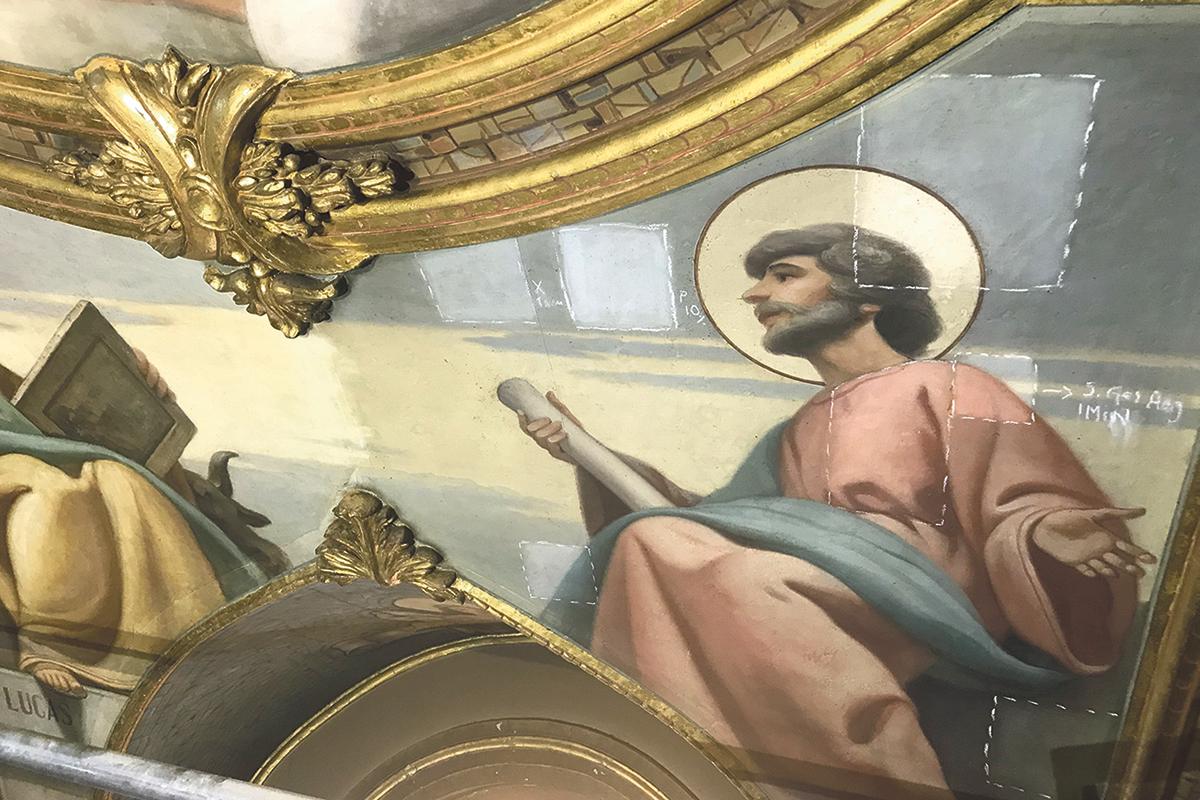 The finding on the ground of pieces of the paint layer and evidence of water infiltration prompted the church’s rector, Rev. Can Nicholas Doublet, to commission Atelier del Restauro to carry out a professional investigation on the state of conservation of the church’s ceiling. The resulting reports highlighted a widespread phenomenon of deterioration of the marouflage paintings due to the infiltration of moisture from the ceiling and the widespread accumulation of acidic pollutants on the painted surface.

During the condition survey it was decided to undertake an emergency treatment on the most detached areas of the wall paintings in order to prevent the loss of original material.

In 2016 a detailed mapping survey of the ceiling, the restoration of the roof and an emergency intervention was carried out by securing detachments. Nevertheless, the overall result of the survey indicated a necessary and urgent action for the conservation and restoration of the entire vault of the church.

Thanks to the financial support of Bank of Valletta it was possible to start the conservation works of the painted ceiling and decoration in 2018.

The paintings of the three bays and the main apse where carried out using the marouflage technique. Meanwhile, the foliage decorations dividing the three bays were painted directly on the stone support using the ‘oil on stone’ technique. The golden cornices adorning the marouflage paintings were carved in wood and were gilded using real gold leaf.

The marouflage method consisted in the artist painting the scene on a canvas support which was then attached to a wall/ceiling through adhesion by coating the surface of the wall with a glue. In the case of Briffa for this ceiling a lead-based glue known as bjankett was used. The technique was widely used in Malta and Gozo from the beginning of the 20th century and Briffa was one of the artists who extensively exploited the technique.

The use of a canvas support so as to avoid the painted surface being in direct contact to the stone support safeguarded better the painted layer and prevented the detachment of the painting due to deterioration mechanisms caused by the Globigerina limestone.

All the paintings and decorations were originally coated with a protective coating or varnish which itself become physically degraded, darkened and yellowed by time, masking the original intended tonalities of the painting, thus causing aesthetic damage.

The main conservation problem of the paintings was that the surfaces were extremely obscured by an oxidised varnish layer which was impregnated with a consistent dark grey layer of particulate matter composed of dust, dirt and sooth. Therefore, the ceiling’s original colours and gilded surfaces suffered dangers occurring from air pollution, arising from the church being situated in one of the island’s busiest roads.

One of the first measures taken was the installation of a glass antiporta to act as means of preventive conservation against pollutants from the outdoor environment.

The cleaning intervention of the ceiling was a complicated task because the particulate matter proved to be tenacious, and several tests had to be carried out.

The cleaning revealed a brilliant palette, with an array of colourful details and well-expressed figures for which Briffa was remarked as an artist. The cleaning indeed revived the three-dimensional expression of the paintings and the brilliance of the gilded surfaces and decorations which serve to delineate the scenes represented.

The preparatory drawing in some passages of the scenes was left showing on purpose by the artist especially in the earlier panels (1948-49) of the ceiling, a detail elusive to the viewer from below, which the conservators were privileged to view close-up and were gratified to uncover from under layers of dirt. Thanks to the current conservation methodologies, the rigorous application of certain criteria and the careful work of the conservation team, it has been possible to obtain the result one can see today; and those who remember the previous state of conservation will appreciate even more what has been done.

The satisfaction is great when, as is the case here, the work carried out led not only to the conservation and restoration of the structure and contents, but also to improve the fruition of these paintings that adorn the church, a source of true and sincere joy and breath of beauty. 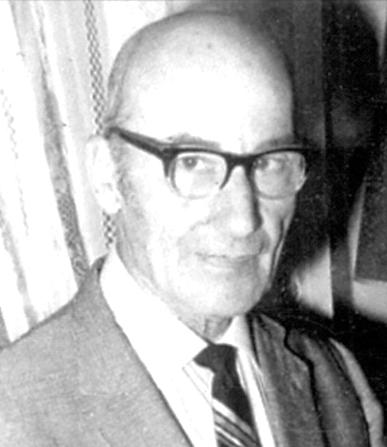 Giuseppe Briffa (1901-1987) painted the ceilings of several churches in the Maltese islands and was one of the pioneers who shaped Malta’s 20th century artistic movement. His earliest commissions were at St Helen’s Basilica and the Sanctuary of Madonna tal-Ħerba, both in Birkirkara.

He was one of the leading church artists of the time; his art had characteristics that reflected the tastes and influences of the period. He worked extensively as a church artist particularly in Gozo, painting churches in Victoria, Ta’ Kerċem, Santa Luċija, Ta’ Pinu, Mġarr and Nadur.