Every year, on January 1, copyright protection expires for millions of creative works, allowing those works to be used by anyone without restrictions.

Why New Year’s Day? Copyrighted works such as books, artworks or music are usually protected for up to 70 years after the death of their author – as stated by Cap.415 of the Laws of Malta, the 2000 Copyright Act – and this protection ends on 1 January. On this Public Domain Day, we celebrate the rich creative works that have entered into the public domain.

In 2022 the works of writer André Gide and historian Robert Seton-Watson, but also a character like Winnie the Pooh, will enter the public domain, where they will remain forever free to access. They will thus join the likes of Shakespeare and Beethoven, but also other artists whose works only entered public domain in 2021: novelists Franz Kafka and Virginia Woolf, actor Buster Keaton, composer Irving Berlin and mystery master Agatha Christie. 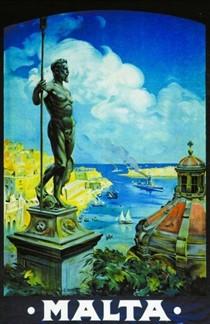 Poster by Edward Caruana Dingli, 1924. This and other works by Caruana Dingli are in public domain since January 2021 and are free to use by everyone.

Why is this important? Once copyright expires, books, paintings or music can be reproduced freely and new works can be derived from them, with no fees due or permission required. This is a boon for creative industries and the economy in general, and often what’s behind the revival and return to fashion of certain styles and topics.

For example, as of last year (2021) the works of Edward Caruana Dingli (1876-1950) entered public domain. While his originals paintings are displayed at MUŻA, everyone can now make use of his iconic representations of Malta – like this touristic poster for the 1924 British Empire exhibition at Wembley.

While works in the public domain can be freely used, also for commercial purposes, no additional rights can be claimed upon them – even by new digitisation, as copyright only applies when there is artistic added value, which a scan does not provide.

Unfortunately, since public domain is little known, some are tempted to extend ungrounded and illegal copyright claims on works that are already in public domain, often for private gain in the form of undue concessions or royalties – a practice with chilling effects on creative use and innovation.

This is why we celebrate Public Domain Day, when new works enter the public domain. It is a day to celebrate the lives of authors who died 70 years ago and whose works have finally become available to the world to access and use freely. Join us by browsing on Wikicommons through the creative work of Maltese authors, painters, photographers and musicians whose genius today belongs to all humanity.

Davide Denti is a member of Wikimedia Community Malta and Wikimedia Italia.

Neville Borg is a founding member and secretary of Wikimedia Community Malta.