In a loud and angry world, where in one way or another we are constantly and instantly connected to various forms of violence and war, it has perhaps never been so important to remain connected with the everyday. 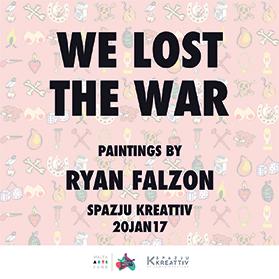 And although it may initially sound shallow, we must keep making a conscious effort to carefully contemplate the more personal, internal wars which we face on a daily basis, particularly those that we feel we’ve lost, for it is in clarify-ing the sum of parts that we can understand the whole.

In his latest exhibition set to open this month, Ryan Falzon explores this idea of war and loss on various levels, particularly within the everyday where we often stumble and are unable to find our ways and whereabouts. Through a series of 23 paintings that characteristically hold a variety of signs and symbols weaving in and out of the political and personal, Falzon has presented the public with yet another challenge. Here’s my conversation with him which is intended to serve as a springboard for those who are up to this challenge.

In anticipation to your upcoming exhibition We Lost The War, could I start off by asking you how this project was conceived? What were your starting points and what sort of process did you use to approach your initial thoughts and ideas?

My starting point, as usual, was researching a variety of sources, this time focusing on the history of organized crime and its absorption of stereotypical characters into mainstream culture through the media, particularly through cinema.

The projection of the image of godfathers and hoodlums on the public was one of the more important inspirations of the project, studied mostly through social media. An example which comes to mind is that of teens posting photos online of their Sunday cocktail binge with a subtitle going ‘Pablo Escobar is Me’. I have a sneaking feeling that before they downloaded ‘Narcos’ (possibly illegally), they had no clue who Escobar was.

Those familiar with my works are aware that the inclusion of violent manifestations and pop culture are two main themes that keep resurfacing in my works. This collection makes the most of these themes. We Lost The War is an exhibition of 23 paintings. 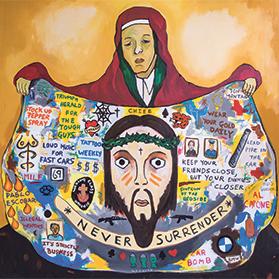 This time round I worked on large scale paintings, with some going up to 190 by 190cms. Although the works feel like they were executed spontaneously, these works involve research and planning which may not be immediately evident.  I would like the viewer to reflect and take in the eclectic mix of references and the constructed relationships that are presented in my work.

I know your work to be richly layered in social, political and personal connotations which comment, criticise and/or reflect in some way your context and experiences. Although still quite subtle, there’s a stronger sense of the personal this time, in the titles you’ve given your paintings and the title of the exhibition itself which refers to the ‘We’ who’s lost the war. Could you talk a bit more about this personal aspect to this body of work? What war/s are you referring to and how do you feel this sense of loss?

We Lost The War should not be read as a commentary on current wars and conflicts going on in countries not far from us. Consciously, I stirred away from such themes and a photojournalistic approach.  I have opted instead for an investigation focusing on little personal wars and inner conflicts that are ‘lost’ on a daily basis. I was looking at instances of corporate bullying, where one cannot resist authoritarianism, and an individual ends up acting according to the rules of the establishment.

One needs to be comfortable with discomfort

Some works portray anonymous individuals falling in and out of relationships. Maybe they are ‘losing’ a personal struggle. This is what this show highlights. This choice was not done for morbid self-attention, a presentation of the artist as a tortured soul, thus the ‘We’ in the title. In such context, characters like Travis Bickle, the anti-hero from Taxi Driver (1976), reign.

I feel that one of the problems with our society, perhaps today more than ever, is that we tend to carry out loud and aggressive actions in order to not feel alone or lonely, without realising the importance of solitude, of being alone and not getting bored with oneself. Is this something you reflected upon in your paintings too?

In my interpretation, the loud and aggressive actions were not the violence acts themselves, but rather accessories that comes with images of violence – the flashy cars, the heavy gold chains, the typical 1920’s Prohibition era gangster with a fedora and sharp suit. In paintings such as Sokkors, Unknown Saint and Back in Business, an individual with an ambiguous, confused look on the face is surrounding himself with icons of violence and cheap boosts to cover insecurity.

Solitary figures are presented, yes, but always in a context. We see a Scarface wannabe sitting at a table by himself; we see various saints, but it does not necessarily try to moralise the importance of solitude. A considerable amount of works depict saints as lone rangers, where their story and brutal, coarse martyrdom was given a contemporary, narrative treatment hopefully challenging the conservative take on the subject. 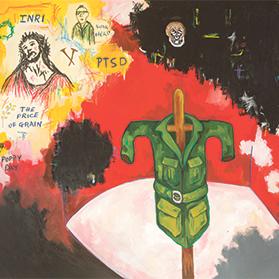 These ‘accessories of violence’ which you mention are expressed with a very individual style, a style which has been described as mixing Pop Art and Neo-Expressionism and which you then filter through a personal and original expression. What do you find in Pop Art and Neo-Expressionistic idioms that lend to your own artistic expression of such concerns?

I am intrigued by the use of colour in Pop Art, and the Neo Expressionism style championed by the likes of Basquiat. I want narration and the sense that these works are to be fuelled from life, not from some cold intellectual concept or style. There is also the influence of Art Brut especially for the finish and appearance, while some compositions are heavily influenced by Medieval Art.  I try to use styles that work well with what I am trying to communicate.

Transgression is definitely not related to one genre. Take for example Serrano’s Piss Christ to La Nona Ora, the installation by Maurizio Cattelan. My work speaks for itself. My intention is to develop a painterly language that viewers find challenging but meaningful. Shock for shock’s shake is out - you can see it all on the internet, why go to a gallery to look for a scandal? On the other hand, the juxtaposing of objects which when read together will create an innovative, somewhat dark discourse which is maybe unsettling... yes that is my work. In A, transgression works hand in hand with deception. Anyone failing to see through the bright colours and intricate compositions will not get the underlying themes which are recurrent in all the works presented.

I do not present myself as a moralist. Clearly I have no intention of passing on any moralistic message.  I comment as a young native male living in Malta, taking in influences and working them out through my art.

On a final note. I personally think that getting lost is sometimes a very good way of finding yourself and perhaps this is something one should bear in mind when experiencing this exhibition which invites much reflection but offers no easy answers. Any final comments?

We Lost The War opens on January 20 at Spazju Kreattiv and will run until February 26. The project is supported by the Malta Arts Fund and Spazju Kreattiv.