Bars, theatres and cinemas will reopen in June while further restrictions on restaurants and gyms will be eased from late May, as rules around mask wearing have been relaxed.

Health Minister Chris Fearne and public health chief Charmaine Gauci announced the easing of measures in a timeline detailed during a news conference on Thursday morning.

More details were added later on Thursday. The target dates for lifting further restrictions are:

The announcement comes just days ahead of the reopening of restaurants and snack bars on Monday, which had been previously announced.  On the same day, travel to Gozo will also resume and non-contact sport will continue and arts schools reopen.

Fearne said that health authorities had discussed the use of masks and decided that there will no longer be any fines for people not wearing masks on beaches or pools from June 1.

"We recommend you do, as we do with sunblock for instance, but it will not be mandatory," he said.

Mass events will not happen in early summer, he said, also suggesting traditional feasts will not be held.

"We will be discussing with the Curia so that feasts do not take place. We cannot have large groups as these are mass events and so cannot be held. We will meet the different stakeholders on this."

Watch the news conference live below

The number of people allowed to gather in private households will remain the same, currently restricted to four households.

There were no dates given for restrictions around mass events such as festivals.

"What we didn't mention will remain the same," Fearne said.

He warned that the timeline for reopening "hinges on the numbers staying low" and that the dates were being announced to allow people to plan their lives.

"I repeat and emphasise, the measures will only be relaxed if the numbers remain low," he said. 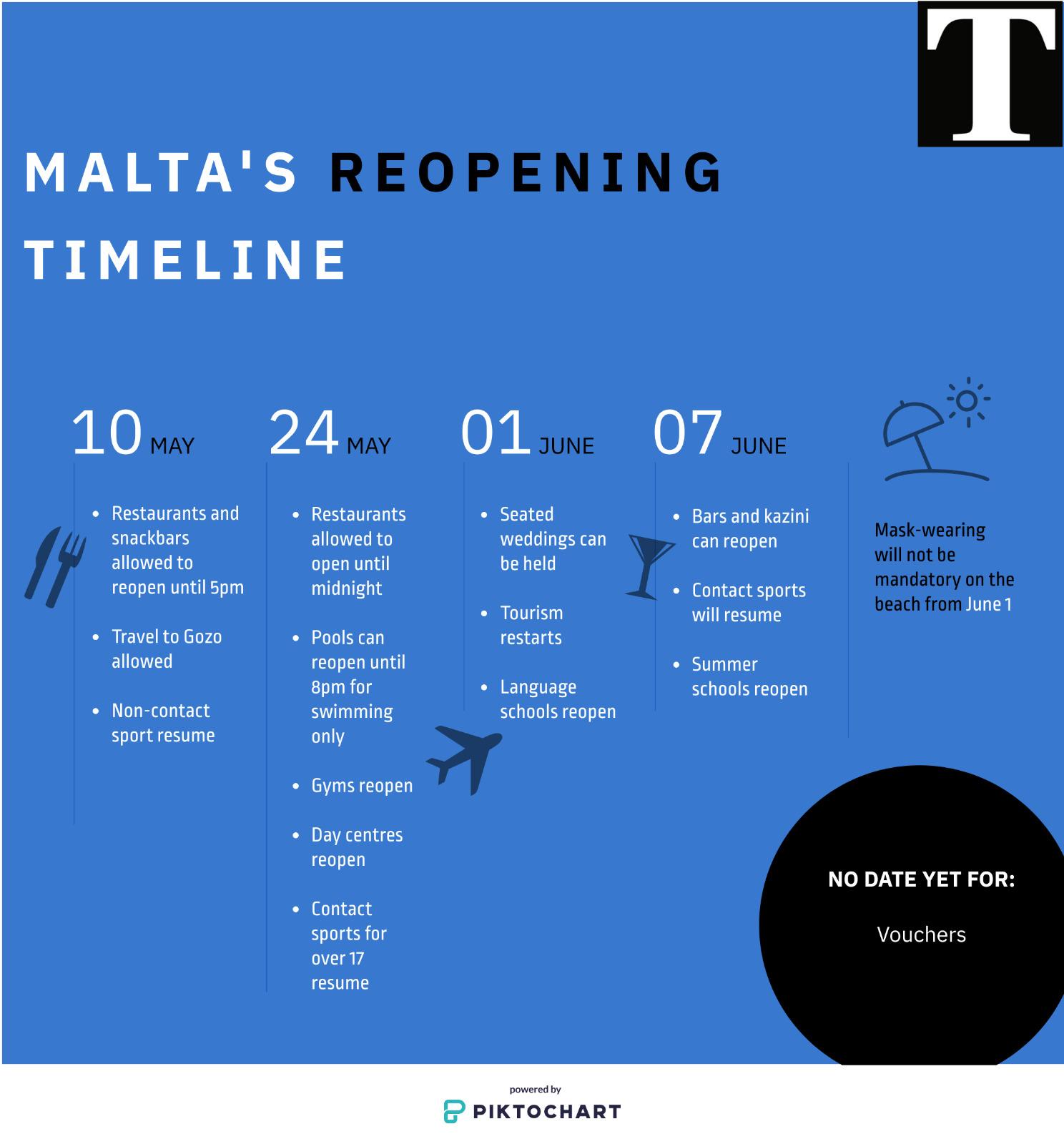 Fearne revealed there are nine new cases of COVID-19 in Malta - the lowest daily total in nine months, bringing the number of active cases to 260.

There are just 23 people being treated in Mater Dei Hospital, including five in intensive care, two of whom have not tested positive for COVID-19. There are no new cases in Gozo.

The positivity rate stands at a low 1.2 per cent.

Of the active cases, 67 per cent are of the UK variant of concern. There are five cases of the South Africa variant while the number of people being treated with the Brazil variant has jumped to 20.

There are no cases in Malta of the India variant.

Fearne said that in a single day, authorities give the vaccine to 1.3 per cent of the population, saying it was "as though we gave a dose every 12 seconds."

He said 51 per cent of the 30-39 year age group had registered for an appointment to get one of the four vaccines being administered in Malta.

"We started using Johnson and Johnson today," Fearne said. "The first consignments were very small. We waited for the third consignment and so we have 10,000 doses in hand."

He said that if the European Medicines Authority approves the use of vaccine for those aged 12-15, there are enough doses to vaccinate that age group.

"We are also looking at possibility of boosters after some months and we are preparing for this," he said.

Prime Minister Robert Abela did not attend the news conference, as he is currently in quarantine after his wife Lydia tested positive for the virus on Wednesday evening.