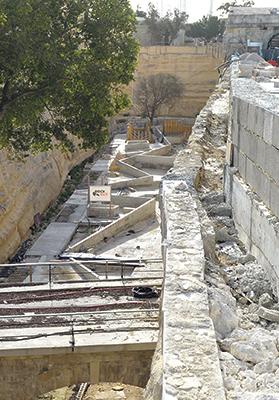 Work on the City Gate ditch garden will resume tomorrow, following the construction of a new retaining wall on the right-hand side. Photo: Matthew Mirabelli

The City Gate Ditch embellishment project, which was planned to be completed for the start of the Valletta 2018 events, has been delayed by six months and will only be inaugurated in the summer.

The chairman of the Grand Harbour Regeneration Corporation, Gino Cauchi, provided the new deadline when The Sunday Times of Malta inquired about the slow pace of work. In recent weeks, work had ground to a complete halt.

The State entity is responsible for the revamp of the entire area known as Il-Biskuttin, comprising the Triton Fountain Square, the area around the iconic Christ The King monument as well as the City Gate Ditch.

Unveiled in July 2016, the project, which was planned to be completed by the end of 2017, is fast taking shape with the exception of the area formerly known as the Yellow Garage, just below the capital’s entrance.

Asked for an explanation, the GHRC chairman pointed out that some weeks ago works had to be halted on the instruction of health and safety officers.

It transpired that the parapet wall behind the defunct bus terminus kiosks leading to the Central Bank Annexe had become unstable and needed reconstruction to eliminate the danger, he said.

“On a positive note this operation is now complete and work in the ditch will be resuming as from tomorrow, with the intention of inaugurating the project in July,” Mr Cauchi said.

Apart from the restoration of the main City Gate bridge and the old railway bridge next to it, the area is set to be converted to a public garden in line with the original Renzo Piano plans which had been shelved soon after Labour was elected to government in 2013.

Work in the ditch will be resuming as from tomorrow

At the time the move had been justified on the basis that the new Parliament building and entrance had gone over budget.

Under the revised plans, vehicular access through the ditch will be retained through a narrow lane on the side.  As for the garden, this will take a thematic approach, with various zones each focusing on different aspects of Valletta’s history.

The former Yellow Garage will be converted to a fully-fledged parliamentary library and archives.  Public access to the ditch garden will be by means of a staircase and lift.

Meanwhile, the Triton Fountain is set to be inaugurated next Friday following a €4 million restoration project.

This event will finally do historical justice with this artistic masterpiece as no proper inauguration ceremony has ever been organised despite its importance.

Designed by renowned sculptor Vincent Apap, the fountain delighted the crowds for the very first time on Saturday May 16, 1959, at a cost of €175,000. Victor Anastasi was responsible for the technical layout and engineering work.

Two decades later, in March 1978, the top basin collapsed due to the extensive damage sustained a few months before when a talent show was staged on top of it.

Since then, there have been a number of interventions, none of which were up to scratch, including the installation of an obstructive central bronze pillar which has now been removed in order for the fountain to be restored to its original splendour.