In a statement on Sunday afternoon, the department said it was dissociating itself from the story on Bis-Serjeta/Serjeta Biss and comments attributed to its director. It is also referring the issue to the police.

The story said that the Civil Protection Department had issued an amber Franco Debono warning, 'the second-highest threat level possible'.

The amber alert, it explained, meant that a Xarabank appearance was now imminent.

The story appeared after Dr Debono returned to the headlines with claims that the prime minister was corrupt.

It said authorities 'seem to have been caught unaware by the torrent of blog posts in recent days, which culminated in Debono calling Joseph Muscat a corrupt idiot and claiming “My moment has arrived” like the hero of a third-rate musical.'

“We should have paid more attention to the signs from the past few months. You should never take your eye off an ego that huge,” CPD director Emanuel Psaila 'was quoted' as saying.

The Civil Protection Department was in no mood for a joke, however.

"The case has been passed on the Cyber Crime Unit of the Police," it said on Sunday.

The website reacted in predictable fashion - it said it had reported the CPD post to the police Silly Crimes Unit (see below): 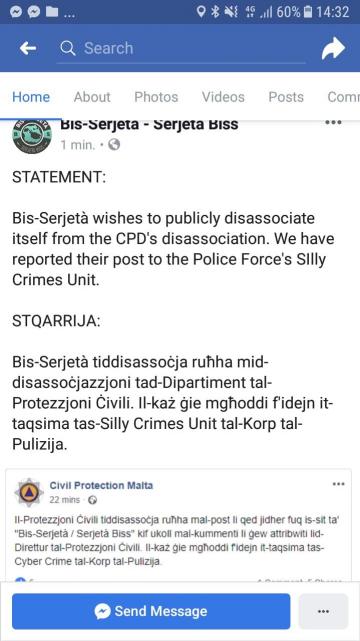