The government said on Wednesday that Melvin Theuma, the middleman in the Daphne Caruana Galizia murder plot, was not among those persons employed in the public service.

It was reacting to a letter allegedly written by Mr Theuma where he said he was given a job.

On Wednesday Mr Theuma also testified in court that he said he was given a job by then Chief of Staff Keith Schembri and Sandro Craus, the OPM's head of customer care, "at the ministry opposite the old theatre".

Mr Theuma said he used to receive a cheque every month but never actually reported for work. The payments stopped after the 2017 election.

Sat in court one metre away from middleman Melvin Theuma as he testified that @JosephMuscat_JM’s personal secretary, @CrausSandro, gave Theuma a monthly government salary with the agreement that he’d never turn up for work, while Theuma was managing the work of the hitmen.

In the statement, Principal Permanent Secretary Mario Cutajar said that on Tuesday [when the letter was published by Times of Malta] he instructed the verification of all government employment records.

It resulted that Melvin Theuma’s name was not among those of persons who had been employed in the Public Service.

"All employment data is being verified afresh and all employment records have also been requested from all government entities," Mr Cutajar said.

"The verification results will be preserved so as to be available for ongoing or future investigations."

Mr Cutajar said the police have been informed about these developments.

Mr Theuma gave evidence on Wednesday after having been granted a pardon on condition that he reveals everything he knows, and his evidence can be corroborated. 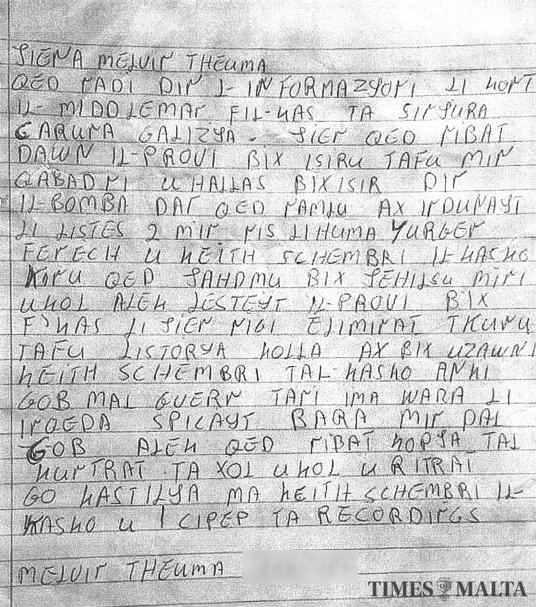