In a recent index formulated by the Swiss Re Institute, Malta ranked highest in the world for the fragility of its biodiversity and ecosystems. According to University of Malta experts, overpopulation and its demands are mostly to blame for this dire situation. 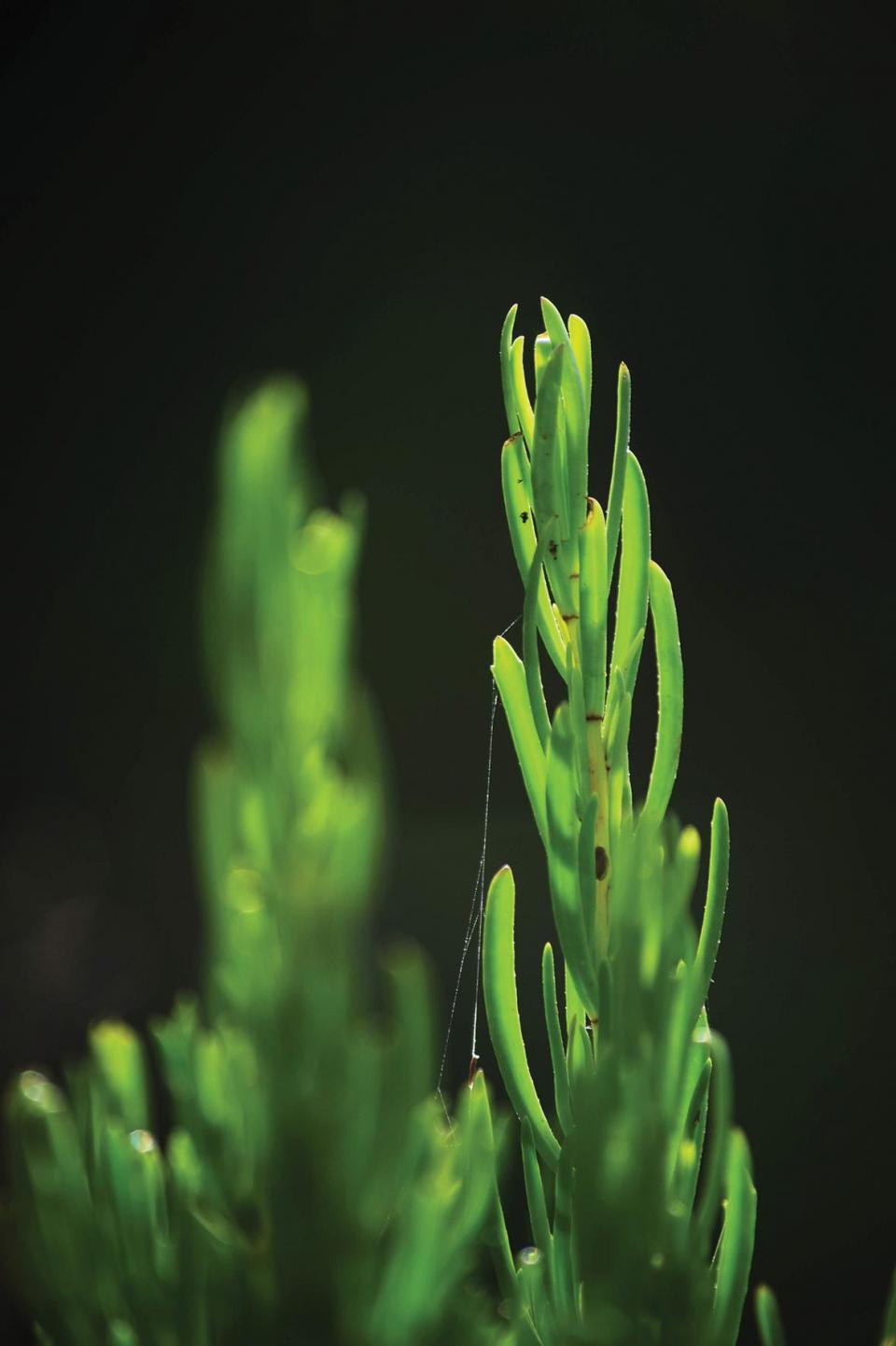 “We market ourselves as ‘a jewel in the Mediterranean’, renowned for our picturesque, crystal-clear waters. While visually appealing, such clarity is actually an indication that our waters are as devoid of nutrients (Powley et al., 2017) as our land is of natural, rural areas. We are a concrete jungle, plagued by urbanisation – rich in tourism and poor in biodiversity,” Sandro Lanfranco, senior lecturer and head of the Department of Biology at the University of Malta, says.

“Though it may be easy to blame the loss of biodiversity on road and construction works, with an ever-growing population of almost half a million, on a small rock, it is our overpopulation and its demands that plays the largest part in our biodiversity loss,” she points out.

“In fact, the Eurostat regional yearbook (2020) indicates that, due to our high population density, while Malta has a high proportion of ‘artificial land cover, [consisting of] urban settlements, industry and commercial units, or infrastructure’, most of the island is, in fact, dominated (though to a lesser extent than decades past – as a result of the increase in urbanisation) by agriculture. Therefore, while it may be tempting to blame high-rise buildings and roadworks, these actually contribute little to the loss of natural communities, especially since such areas are already considered to be disturbed.”

Not all plant species, however, have to literally cling on for dear life in order to survive. 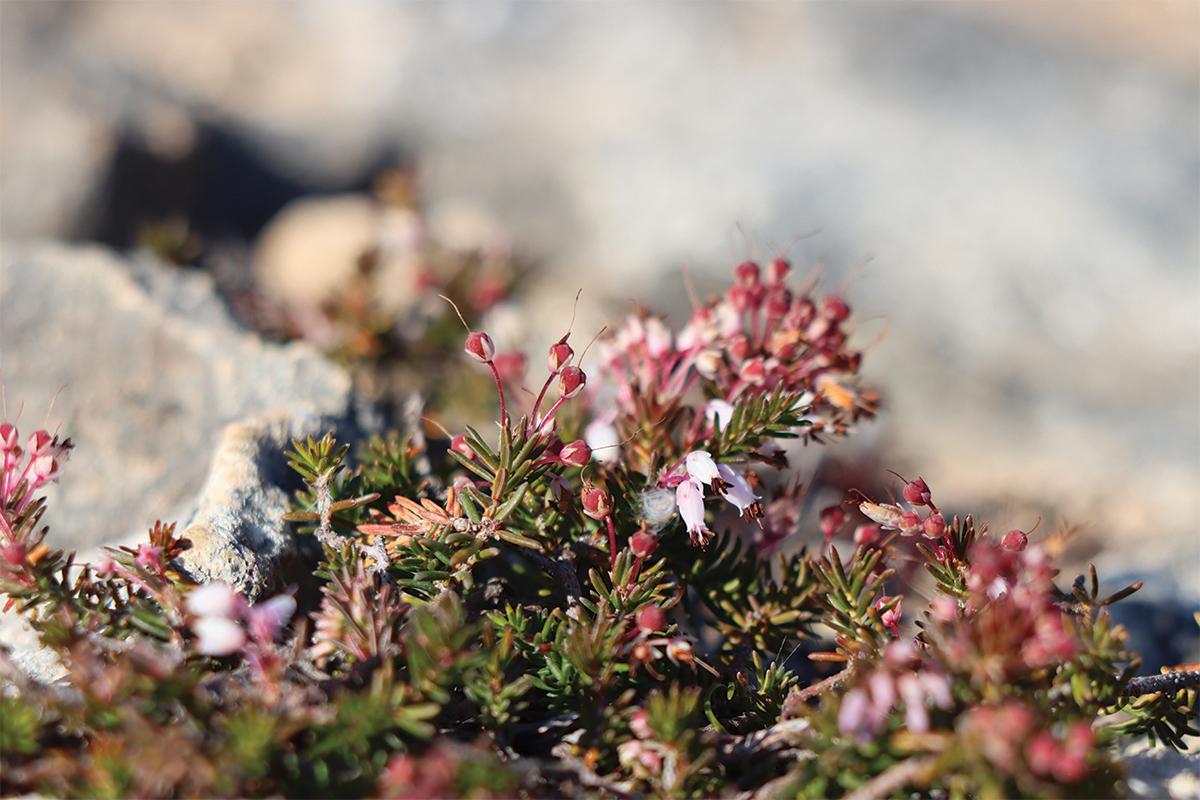 “Cliff species are less affected by urbanisation and agricultural use due to their inaccessibility and unforgiving conditions. However, such species are threatened by other more natural stressors. Their restricted habitat and specific conditions and living tolerances mean that, if translocated or planted in other habitats, they would simply be outcompeted by specialists,” Lanfranco notes.

He gives the example of the critically-endangered Maltese national plant, Cheirolophus crassifolius, more commonly known as the Maltese rock-centaury.

The two experts quote studies conducted in 2014 by Giovanna Aronne (co-chair of COST Action CA18201 ConservePlants) and her team, who found that coastal cliff habitats have a far higher number of rare, endemic and relict species than are present in surrounding areas.

“This indicates that species present in such habitats are either exceedingly hard to come by (rare), only found in an area of a particular country (endemic) or are isolated survivors from the ice ages (relict),” Bellia says. 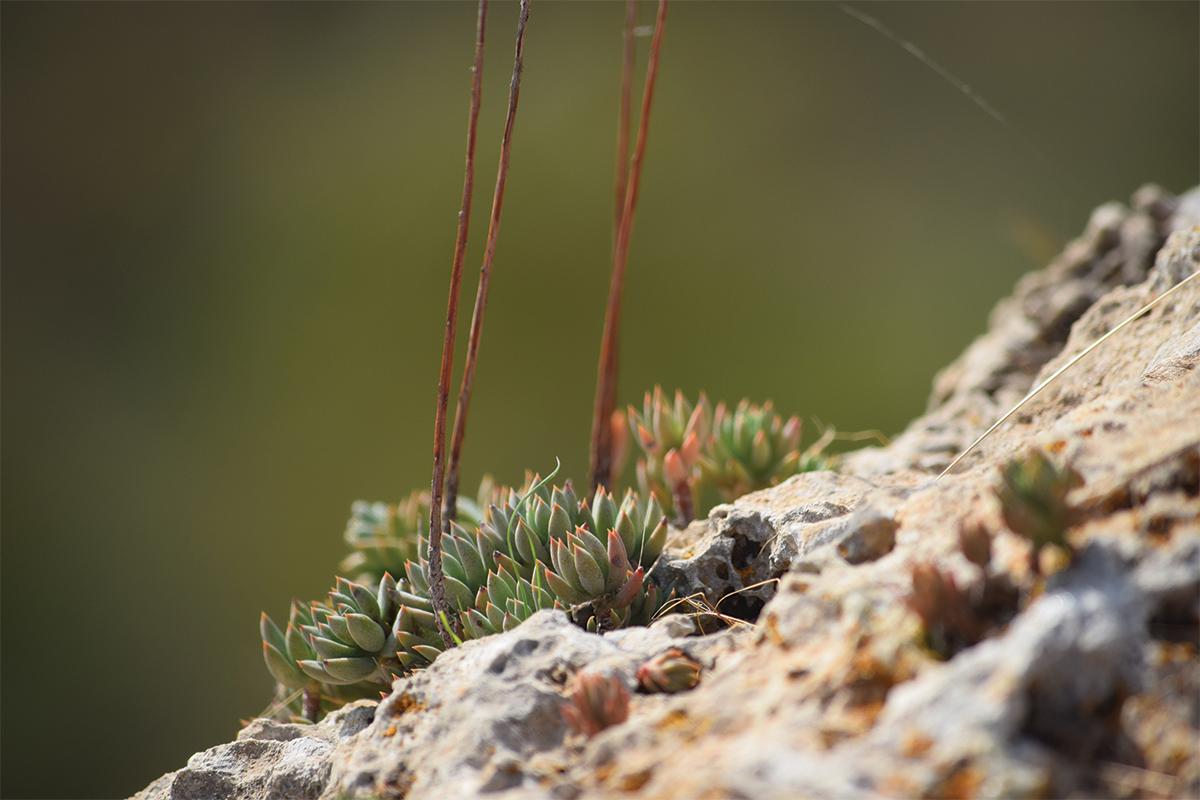 Sedum sediforme (Mediterranean stotnecrop/sedum) on a cliff edge in Dingli.

In 2014, Aronne’s team stated that this is due to geological, geomorphological and structural features of coastal cliffs worldwide. In order to inhabit such areas, these species must be adapted to withstand a plethora of different stressors that come with the territory.

Being exposed to wind and saline conditions, along with having to cope with anchorage on a vertical surface, means that very few species possess adaptations to cope with such harsh abiotic conditions. Species must be able to regulate water uptake and storage, as well as defend against predation and being uprooted.

“Along with climate change, abiotic conditions are not the only challenges flora face in coastal areas... human impact plays a great part in the rate and risk of their extinction. This is because certain detrimental interferences may reduce the habitat range of these plants, resulting in competitive exclusion,” Lanfranco says.

“It is our duty to protect and preserve such habitats for future generations as, once destroyed, they may never regenerate or may need centuries to do so. It all boils down to what type of ‘green’ we make a priority…” 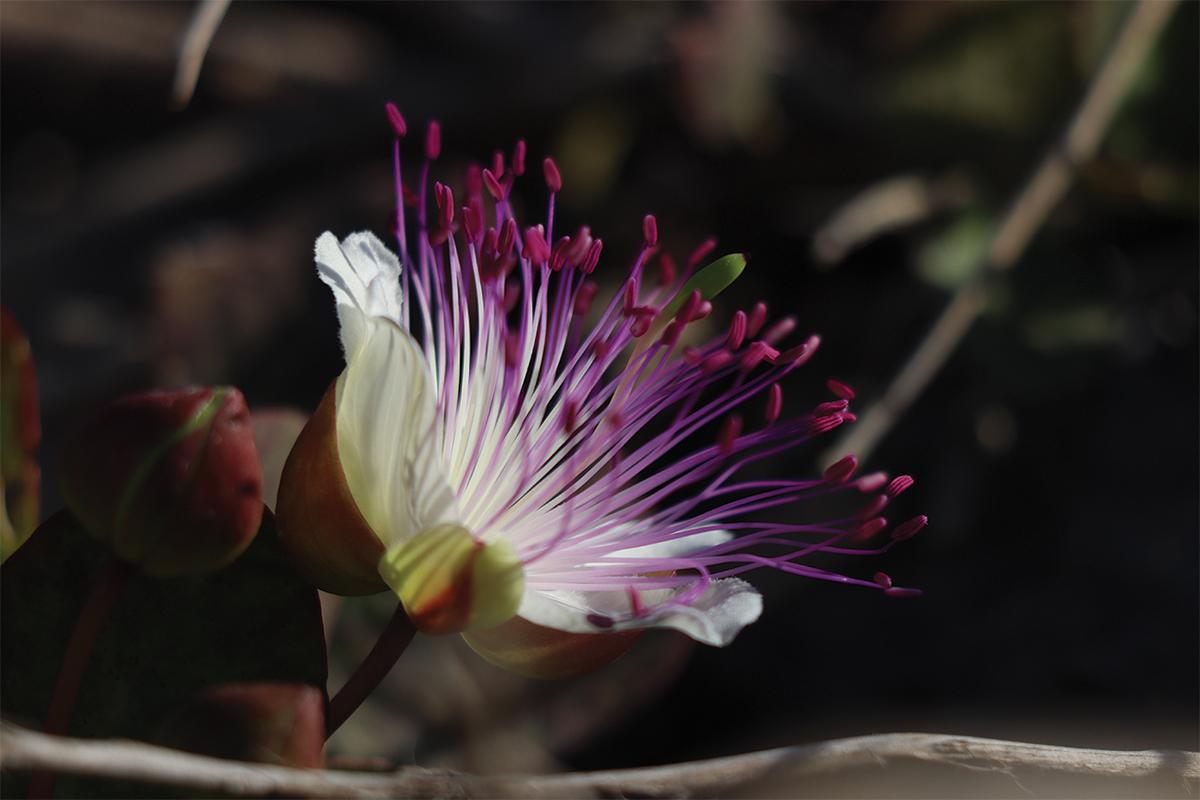 Its specific tolerance to saline levels in the soil make it a useful indicator of the extent of the coastal zone in the Maltese islands.

This small, succulent species is able to withstand exposure to elements, such as those present on cliff faces using various mechanisms and adaptations to prevent water loss. Fun fact: Sedum sediforme quite simply/literally translates to ‘sedum shaped like sedum’...not awfully specific (or helpful) if you’re not familiar with sedum though.

Unlike most other plants of this family, Erica multiflora thrives in alkaline soil rather than acidic soil. This is good news considering the pH of soils in the Maltese islands.

With a magnificent inflorescence such as this, any pollinator would be hard-pressed to resist it.

Patriotism at its finest: our national plant, considered to be an endemic, relict species is the only survivor of a group of plants that was formerly far more widespread. Now, however, it is restricted to the Maltese islands.

Though a predominantly North African species of biogeographical importance, the Maltese islands are part of the northernmost portion of its distribution. Egyptian St John’s wort is another succulent, shrubby species with an affinity (which, in fact, is more likely simply a ‘tolerance’) for exposed, steep and otherwise seemingly unfavourable habitats such as cliff faces.

Note: Although the above species are present in cliff habitats, Cheirolophus crassifolius is the only species from this list that is restricted to this habitat. 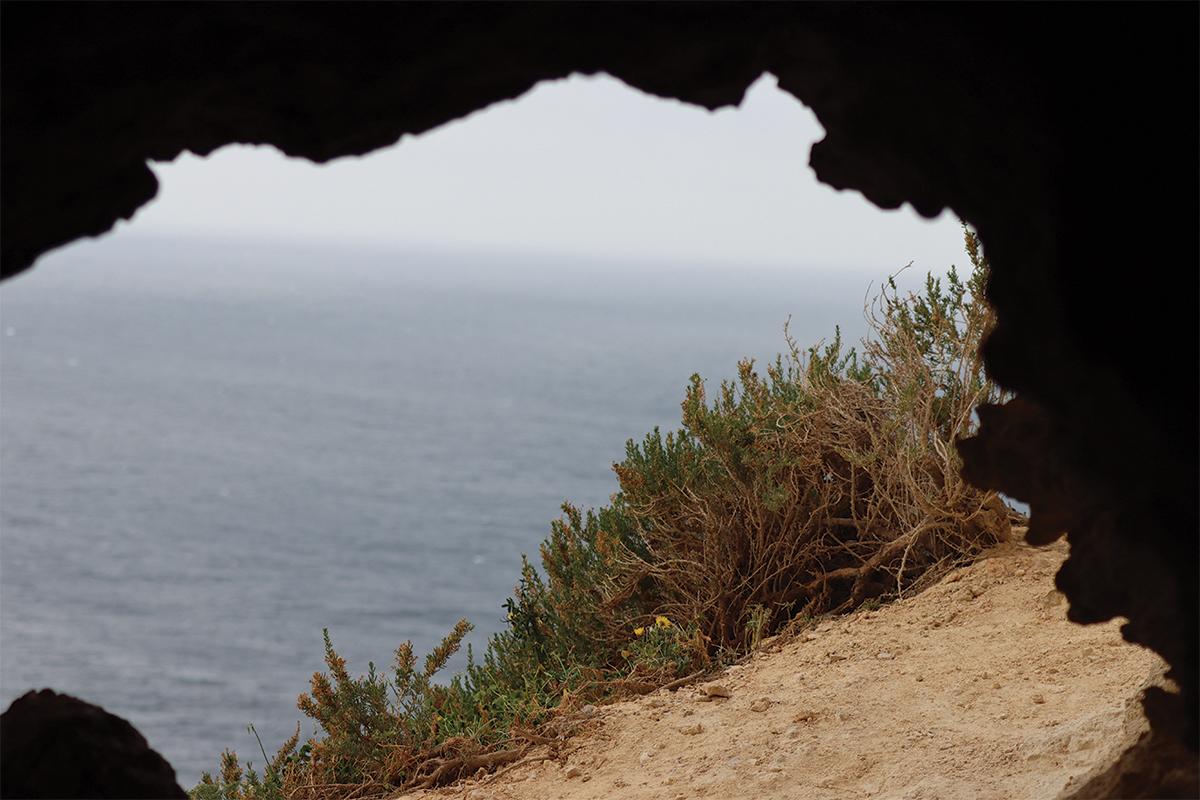 A photo from inside Mixta cave, in Gozo showing Limbarda crithmoides (golden samphire/xorbett) and other less dominant cliff vegetation. Exposure to all the elements – wind, sun, salt – renders such habitats unforgiving and, to most species, uninhabitable. 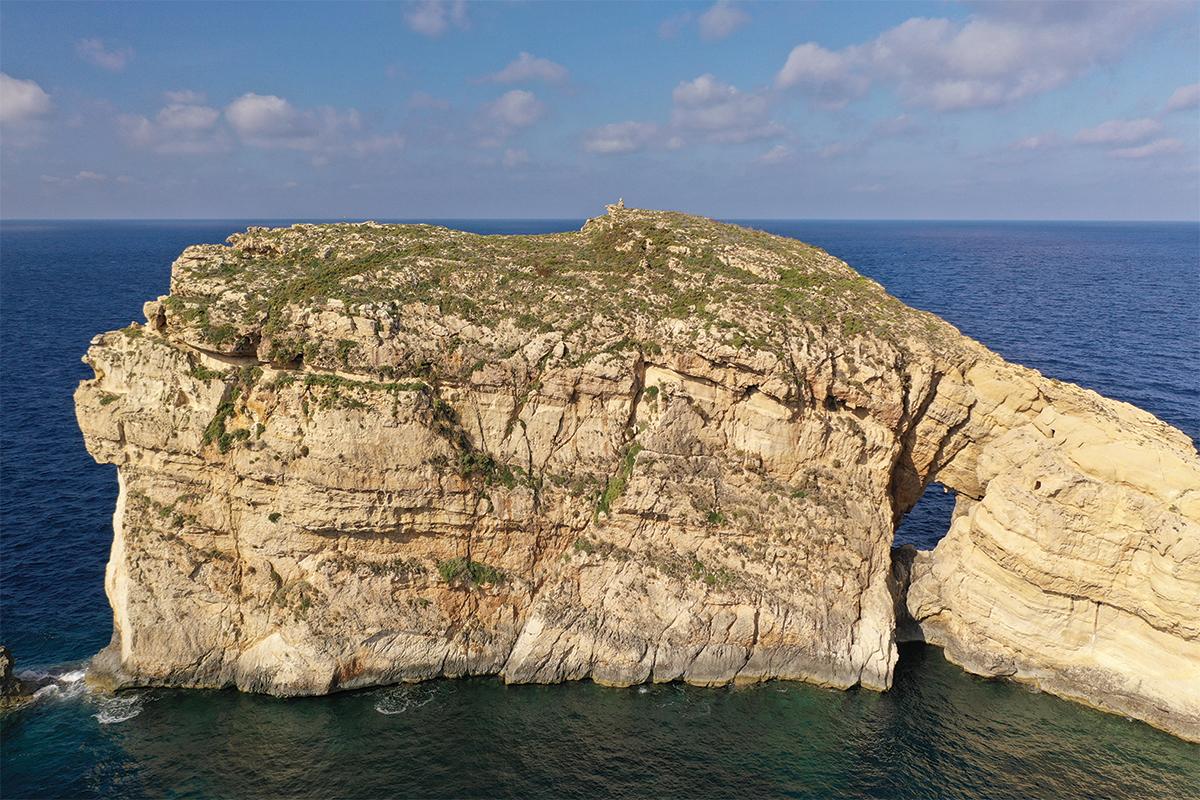 A drone image of the Fungus Rock, off the northwest of Gozo, shows cliff vegetation along the top and side of the rock.