Drug runners used secret compartments hidden in cars to smuggle cocaine into Malta via a local ferry company, according to Italian court documents.

Italy’s finance police on Tuesday busted an international cocaine-smuggling ring run by the ’Ndrangheta crime group after cracking a secret code they used to communicate on popular messaging platforms.

Over 400 officers carried out dawn raids across Italy, armed with 57 arrest warrants after a four-year investigation dubbed ‘Crypto’ into over 90 suspects, many from known mafia families.

Those arrested are accused of smuggling large quantities of cocaine from northern Europe and Spain to Italy, hiding it in false bottoms of car boots and other concealed compartments, and in some cases then moving it on to Malta.

Sealed court documents submitted for the case, seen by Times of Malta, detail how one drug runner had been caught shortly after taking a shipment of cocaine to Malta.

The drugs, believed to have been a ‘tester’ kilogram for a Maltese buyer interested in buying more, had a street value of more than €50,000.

According to the dossier of evidence, Orazio Coco, one of the suspected drug mules, travelled to Malta via Virtu Ferries in a Fiat Punto hatchback car on February 23, 2018.

Coco is accused of having travelled to Malta to make contact with local buyers of the narcotics before making a return to Sicily just two days later.

In another instance, a certain Ivan Meo, in the company of two other people using forged identity documents, travelled from Pozzallo for Malta with a Peugeot 307.

A search of the car yielded traces of cocaine and tens of thousands of euros in cash.

A thorough search of the vehicle led to the discovery of a secret compartment near the left rear wheel arch which could be accessed by disassembling a plastic cover which is in turn attached to a metal plate.

Inside the compartment, police found a “noose-like knot” on a rope that they say was used to secure packages of drugs for smuggling.

It is very likely, the documents read, that Meo had just transported drugs to Malta and was returning to Italy with the money received from the sale.

Meo is believed to form part of a ‘team’ of drug runners from Catania that regularly transported drugs to Malta on behalf of the ’Ndrangheta.

After analysing passenger manifests, Italian investigators found that Meo and his associates had repeatedly travelled to Malta on the catamaran for two or three-day trips throughout 2017.

Brother, I sent him five times to Malta, you know I’m getting out of Malta

Following Meo’s arrest and detention in Catania, the entire Calabrian drug operation swiftly changed their method of communication and are believed to have started using encrypted phones.

However, before that, investigators had managed to crack a code that the drug ring used to communicate.

“They communicated via a complex code matching numbers to apparently random letters of the alphabet, without any spaces or punctuation,” Captain Carmine Virno, whose team led the investigation said, when presenting the case in Italy on Tuesday.

’Ndrangheta crime families in Gioia Tauro and Rosarno in southern Italy forged direct contacts with South American suppliers through an intermediary in the Dominican Republic.

How investigators cracked the drug ring

Virno’s team painstakingly worked on a code the drug traffickers used until finally breaking it when they figured out the word ‘con’, which means ‘with’ in English.

Officers who raided the house of a top ring member discovered a pizzino with the alphabet written in blue and the corresponding numbers below in red.

A pizzino is a small slip of paper traditionally used by the Sicilian mafia for high-level secret communications.

This one, carefully cut out of a squared exercise book, encoded large cocaine orders.

Once the code had been cracked, police resorted to old-fashioned surveillance techniques to gather evidence against the suspects, who were skilled in evading modern technological traps, it said.

Some €3.7 million in assets were seized in raids.

What is the ’Ndrangheta?

Based in Calabria, the ’Ndrangheta is considered one of the world’s most powerful crime syndicates due to its control over the movement of cocaine in Europe.

It has extended its reach across all parts of the world, and it has long surpassed Sicily’s Cosa Nostra as Italy’s biggest mafia organisation.

The investigation showed the ’Ndrangheta families nevertheless thought the Sicilian mafia had its uses.

They formed ties with the powerful Cappello family in Catania to set up the shipments of cocaine to Malta. 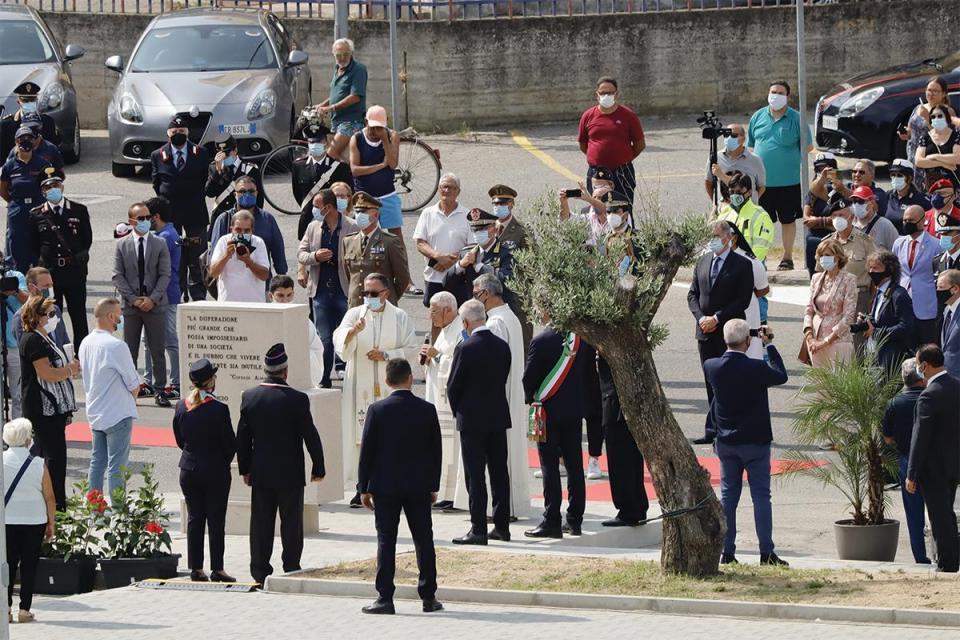 An inauguration ceremony last year in Soverato, Calabria, of a monument dedicated to a policeman killed by an exponent of the ’Ndrangheta in 1991. The ’Ndrangheta is considered one of the world’s most powerful crime syndicates due to its control over the movement of cocaine in Europe. Photo: Shutterstock.com

In one text exchange between Cappello family members, the shipment of drugs, Mexican cocaine, to Malta was discussed, the court documents reveal.

“We have money and in two weeks the plane arrives [from Mexico] with my stuff and we move,” one text reads.

The exchange goes on to detail how the drug trafficker was making a tidy profit from moving cocaine, via a runner, to the island.

“Brother, I sent him five times to Malta, you know I’m getting out of Malta; are you understanding me? Do you know what I’m saying? You know what it means to pay forty-four [a reference to cash payments]? We go and come the next day and plof! And you go and come back loaded,” the text change ends.